Be gracious to me, O God, for man has trampled upon me; Fighting all day long he oppresses me. 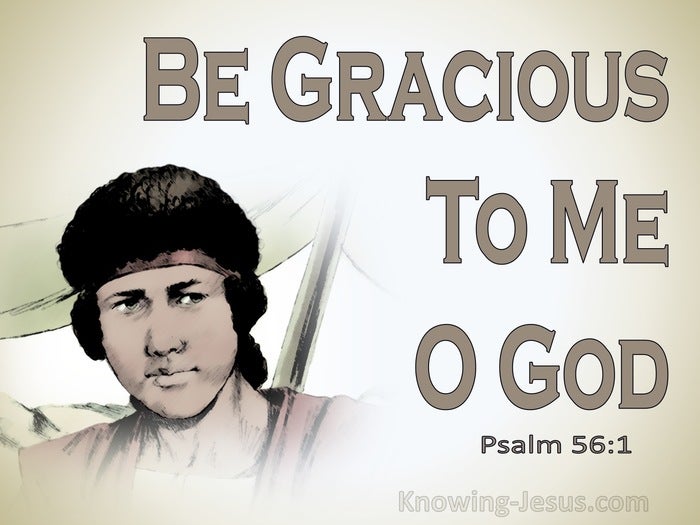 There were many times in David's life when he was alone, afraid, and in great anguish, and Psalm 56 was written when the Philistines had captured him in Gath. The introductory note to the Psalm, tells us that this poignant little song was to, "The Chief Musician", and was set to, "The Silent Dove in Distant Lands." Whether this caption referred to the music or the scene, it provides us with a peep into David's heart, when he was forlorn, friendless, fearful, and in despair.

In the previous Psalm, David had written, "Oh, that I had wings like a dove! I would fly away and be at rest", and in this verse, we pick up the same desperate feelings of sadness and isolation, and the same pitiful picture of a frightened little bird that is trapped and all alone.

Despite being Israel's anointed king, David had many enemies and was often in great danger. Not only did the jealous King Saul seek to take his life, but David was also in danger from the Philistines and other enemies that surrounded Israel. But as in so many of his other writings, David's heart is turned to pray, as he pleads, "Be gracious to me, O God, for man has trampled upon me. He fights all day long and oppresses me."

David's plaintive pleading was a cry of help to the Lord. He knew that no one but God could save him. He also knew he was a child of God and the Lord's anointed king, and so David expressed his need for divine intervention. Attacks of the enemy and persecution from other people, assaulted this child of God from many angles. The constant fightings without and fears within, caused David to cry out for grace and mercy from the relentless attacks that oppressed him.

Down through the centuries of time, Old Testament saints and New Testament believers have found comfort and encouragement in the psalms of David. The yearnings of his heart, that pepper the pages of his psalms, often reflect the same pain and pressure that causes men and women today to cry out to the Lord in their silent distress. Such comforting words provide solace for the soul and inject the will to press on, knowing that God is gracious and faithful and He will avenge His people and protect us under the shadow of His wing.

Like us, David found that both friends and enemies could be used by evil forces to trample on us, drive us to despair and weaken our resolve. And like David, we can call on the name of the Lord and cry out to Him, "Be gracious to me, O God, for man has trampled upon me. All-day long my enemy oppresses me. There are many who fight proudly against me.  BUT When I am afraid, I will put my trust in You. I will hope in God, whose word I praise. In God, I have put my trust. I shall not be afraid of what mere man do to me."

Jesus told us that in this world we will have tribulation. Men will trample on us, persecute us and oppress us day after day. At times we will feel alone, afraid, and in great anguish, but like David, we always have access to the throne of grace, for mercy to find help in times of need. His ear is never closed to His children and His eye is ever towards those that reverence Him.

How important to stand on the many precious promises of God, and remember that He is the Rock on which to build, the Anchor that holds us steady, the Fortress in Whom we find protection and the Saviour of our soul. In the uncertain times in which we live, we may well feel that we are a silent dove in a distant land, but when the enemy comes in like a flood, we know that God will raise up His standard and vindicate us in the sight of our enemies.

God often permits the people who trample over us, fight against us all day long, and cause us to go through such misery, to test our faith and produce patient endurance. They may be people who openly oppose us, or they may be unsaved men and women in need of salvation, for whom we ought to pray. But whatever the reason we are being encompassed about, trampled over and oppressed, we have an assurance that God will avenge our cause and those that hate us will know that He has loved us with an everlasting love.

Let us pray with David, and with multitudes of saints who have gone before, "Be gracious to me, O God, for man has trampled upon me. They are fighting continuously and oppress me. My foes have trampled upon me all day long, for there are many who fight proudly against me. BUT When I am afraid, I will put my trust in You. I will trust in God, Whose word I praise. I will hope in the Lord, in Whom I have put my trust. I shall not be afraid. What can mere man do to me!"

Heavenly Father, what a joy it is to read through the book of Psalms and discover the jewels of encouragement and the gems of hope. Lord, You know those who are against me, especially those who are dead in sin, at enmity with You and in need of salvation. Father, I thank You that You are my God, and I trust You to bring me through the trials and temptations I am facing today, and pray that You would use me as a testimony of Your great goodness and grace. This I ask in Jesus' name, AMEN. 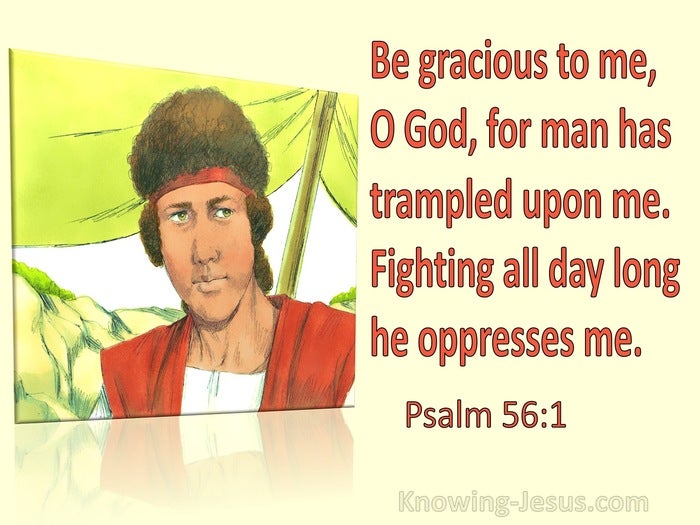 Choose a Verse from Psalm 56