"If anyone does not abide in Me, he is thrown away as a branch and dries up; and they gather them, and cast them into the fire and they are burned. 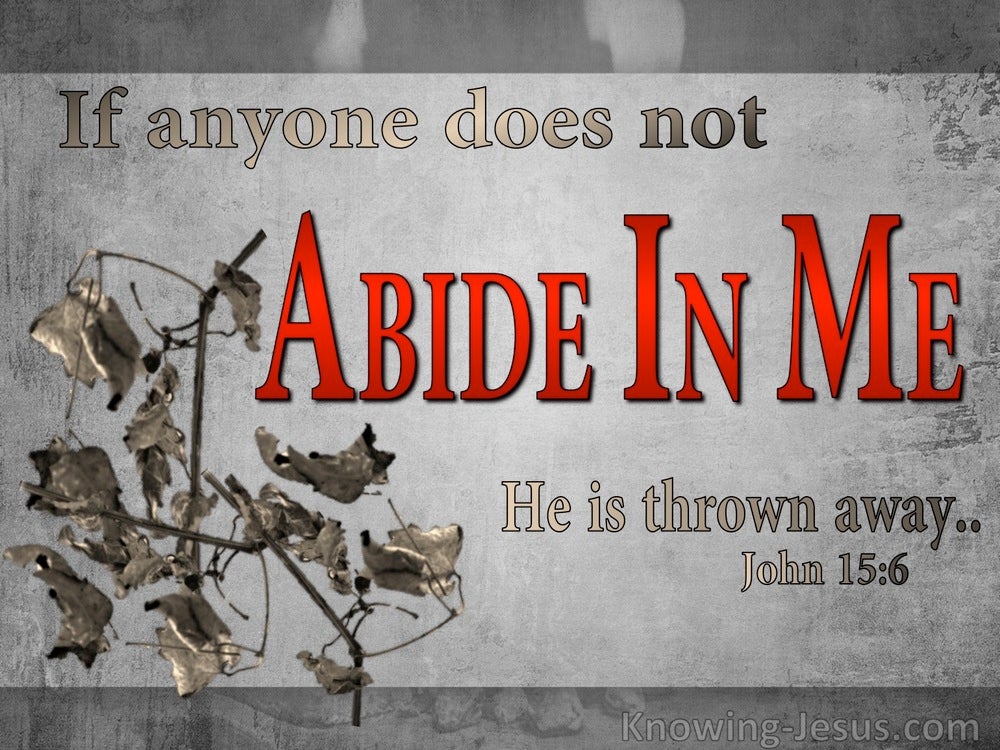 All born-again believers are united with Christ at the point of salvation, and having been made one with Him we are instructed to abide in Christ. 'To abide in Christ' simply means that we are to mature in our spiritual life; to grow in grace and to maintain a close and increasingly intimate fellowship with our heavenly Father. We are to love as Christ loved and to live as Christ lived - in total dependence upon the Father and not trying to do things in our own strength. The one who abides in Christ will be fruitful but if anyone does not abide in Christ, they will not produce any fruit at all.

All born-again believers are positioned in Christ and have become a member of His body - and as such we are called to abide in Him, and He in us... to walk in spirit and truth and to become His disciples. To abide in Christ is to die to self and live only for Him. We are to live our life as Christ lived His life - in total dependence upon God.. doing only those things that we hear from Him.. To be fruitful.. we are to offer ourselves as a living sacrifice, holy, acceptable and set apart for the single purpose of glorifying our Father, Who is in heaven. BUT anyone who does not abide in Christ, throws away their opportunity to bear good fruit to the glory of God - and that life becomes withered and is discarded.

We are to be holy for He is holy.. so that in the power of the indwelling Holy Spirit we may bear much fruit to the glory of God. We are to ABIDE in Christ and He in us if we are to be fruitful branches that produce the fruitful works of righteousness - i.e. the fruit of the Spirit. But if we do not abide in Christ and He is not given first place in our lives then we will not produce good fruit to the glory of God. If we do not abide in Him we will live an unfruitful Christian life - saved but unproductive.. saved but producing only the unfruitful works of darkness. An unfruitful Christian is a saved soul but has lived a worthless, barren, unproductive.. unfruitful Christian life, that does not give glory to God. Such a one is thrown away as a branch and then withers away. Such a one is thrown away, dries up, and is cast into the fire and burned. Good works done in the flesh and not in spirit and truth. They are discarded and burned in the fire. What a waste of a life - saved - but unproductive.

Sadly this beautiful illustration of a Vine and it's fruitful or unfruitful branches is too often used to suggest that a born-again believer.. who is unfruitful, can lose their salvation, rather than reading this verse in its correct context. A believer's fruitfulness depends on close fellowship with the Lord Jesus - He abides in Christ. The believer that does not maintain close communion with the Father becomes an unfruitful, barren branch - a wasted life that did not fulfil the purpose for which he was saved - to glorify God.

Paul calls the fruitful believer a spiritual man while he labels the unfruitful believer a carnal man. He exposes carnal Christians as spiritual babes in Christ who although saved by grace through faith, remain spiritual infants.. out of fellowship with the Father and not walking in spirit and truth. And Paul warns that their life will be devoid of spiritual fruit and whatever they have done in their life will be fruitless and be burned up. We read in 1 Corinthians that the carnal Christian: shall suffer loss.. but he himself shall be saved; yet so as by fire.

To abide in Christ and be fruitful is to say NOT my will but Thine be done... To fail to abide in Christ is to say MY will not Thine be done - and the opportunity to live for Christ is lost... SAVED.. but devoid of fruit. Saved - but a wasted life that dishonours the Father. Saved to the uttermost; but an utterly fruitless and wasted life. Jesus put it this way. He who saves his life shall lose it and he who loses his life for My sake shall find it. A believer saves his own carnal life by not abiding in Christ but living for himself or by trying to produce fruit by his own merit. Such a believer loses the one opportunity he has to honour the Father by denying himself, taking up his cross and abiding in Christ as a true disciple. Instead of growing in grace and maturing in the faith he is thrown aside as an unfruitful branch and his opportunity to live for Christ withers away. Carnal believers waste their lives and are gathered up, thrown into the fire, and are burned: Saved; yet so as by fire

The (spiritual) believer who loses his life for Christ (by abiding in Him) will find his life to be fruitful and will produce much fruit to the glory of God.. Every Christian's work will one day be made manifest: for the day shall declare it, because it shall be revealed by fire. God is a consuming fire and He will try every man's work by fire.. to see if it was fruitful or not. Those that produce spiritual fruit by abiding in Christ shall receive a reward. Those that do not produce spiritual fruit by not abiding in Christ shall suffer loss - Saved; yet so as by fire.

The fruit that these carnal Christians produces is not a spiritual fruit which will be rewarded at the judgement seat of Christ, but carnal fruit such as envy, strife, greed and fleshly propensities, which reflect a worldly lifestyle and will suffer loss and be burned up. What a sad testimony that instead of abiding in Christ and reaping a fruitful reward that lasts into eternity to the honour and praise of the Father anyone who does not abide in Christ will be considered a barren branch that is cut off and allowed to wither away... a fruitless life that did not fulfil its purpose.. a wizened, dried-up soul that has not stored up treasure in heaven a wasted life the put self before Jesus.. a lost opportunity to glorify God in this body and honour the Son to the praise of the Father,

If as believers we abide Him.. the results will be good fruit-bearing, which brings honour to God, but if the believer chooses not to abide in Christ.. or tries to produce fruit apart from the Vine, it will result in a barren Christian life. Every believer has to make their own decision but the consequences of our choices on earth for both the saved and the unsaved have eternal repercussions.

Heavenly Father, thank You that I have been saved by grace through faith in the Lord Jesus and am in eternal union with Him. I pray that I may walk in spirit and truth and abide in Christ - producing much fruit to Your praise and glory - this I ask in Jesus name, AMEN. 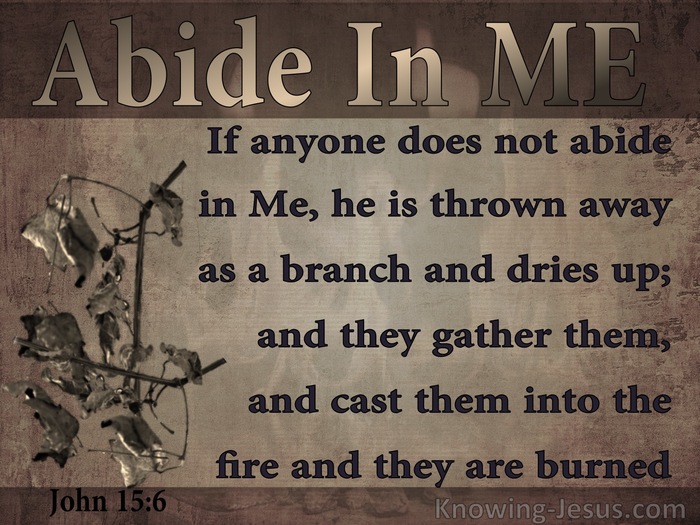 Choose a Verse from John 15

Matthew 26:39
Unfeigned Humility
Made Sin For Us
The Service of God