For this reason the Jews were persecuting Jesus, because He was doing these things on the Sabbath.

Picture courtesy of Arabs for Christ/FreeBibleimages.org

The Lord Jesus went about doing good. He healed the sick, cast out demons, brought comfort to the afflicted and fed the hungry. He raised the dead, forgave the sinner, gave relief to the poor and brought good news of great joy which is for all people - for He came as the light of the world in darkness, the bread of life for the hungry and the living water for those that are thirsty. He is the rock of our salvation - for in Him alone are the words of eternal life. He came so that all who believe on Him would not perish but have life everlasting.

Now it so happened that Jesus had gone up to Jerusalem for a feast of the Jews and He saw a man sitting by the Pool of Bethesda who had suffered an infirmity for 38 years.. but he had no one to help him. It was the Jewish Sabbath and Jesus drew near. He knew all about this man's hopeless condition and in His goodness and grace said to him: rise up, take up your bed and walk. And immediately the man was made well and took up his bed and walked.

After 38 years of sickness this man was cleanses and made whole by Jesus, the Creator of the world - the Author and Sustainer of all life. However the narrow-minded, hypocritical religious leaders of the Jews did not recognise this as Divine intervention.. nor did they regard this miraculous healing as a wonderful gift from God. Instead they saw it as a violation of the Sabbath-day Law. However the proud Jewish leaders forgot that the Sabbath was given to Israel for their benefit. They forgot that it was to remind them of God's ongoing faithfulness to all His creatures, for He was their Creator and He was their Provider.

Remember the Sabbath day, they had been instructed.. remember the Sabbath day to keep it holy. Six days You will work and do all Your labour but the Sabbath is to be holy unto the Lord. The Sabbath was to be a time of refreshment and a time of praise, in which to glorify their faithful Creator. But the religious leaders had over the centuries.. added impossible burdens to each of God's Laws and caused them to become so heavy a liability on the backs of humanity - that everything that took place on the Sabbath day was minutely scrutinised and identified as “work' if it did not fit into their foolish analysis of “work'.

It was for this reason that the Jews were persecuting the Lord Jesus. He was healing on the Sabbath day, and they (not God) had labelled 'healing' as 'work'. They did not understand that the Sabbath was made for man's well-being and not man for the Sabbath. They missed the spirit of the Law and enslaved men into a form of unscriptural legalism that falsely accused God Himself.. of violating His own perfect Law, because He did not adhere to their own unbiblical interpretation.

Man was not made for the Sabbath, but rather the Sabbath had been given to man for their benefit. These small-minded and short-sighted Jews could not see that this poor man had been bound by Satan for thirty-eight long years, and this miraculous healing was a God-given release from his satanic bondage. They did not recognise that the Lord Jesus was not only a good Man but that He was indeed their long-awaited Messiah-King Who was the Lord of the Sabbath, Creator of the universe and God Incarnate.

Heavenly Father, How easy it is to fall into legalism and hypocritical thinking by our short-sighted understanding of Your goodness and grace towards the human race and Your plans and purposes for the redemption of man. Keep me from narrow-minded, hypocritical religious thinking and may I act justly, love mercy and walk humbly with You all the days of my life - to Your praise and glory, this I ask in Jesus name. AMEN.

Choose a Verse from John 5 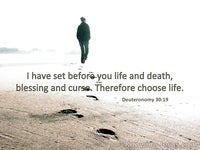