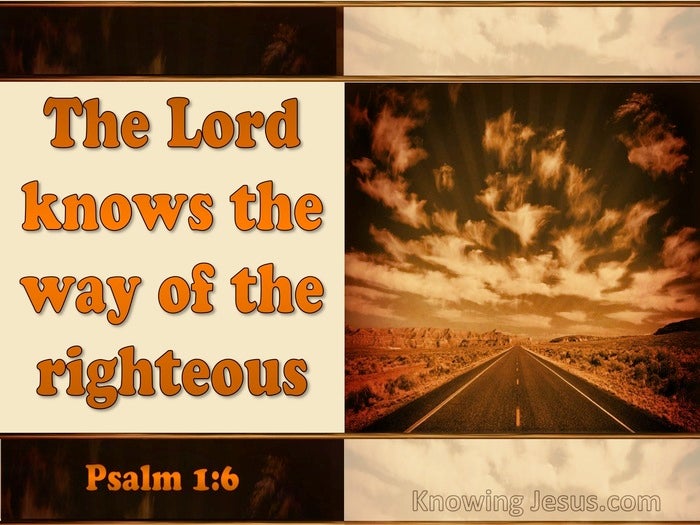 Although the Lord Jesus is truly God, He is also fully Man Who has walked His own earthly pathway and understands the difficulties and dangers of living on this earth in a body of flesh and blood. Although Christ Jesus is truly Man, He is also the eternal, omnipotent, all-knowing God, Who will judge the world in righteousness, and we can confidently claim, "the Lord knows the way of the righteous, but the way of the wicked will perish."

In His earthly walk, we see Him weary and worn. We read of Him becoming tired and alone, wrongly accused, and misunderstood. We see Him tempted and tried just as we are... yet without sin. We see the Lord Jesus suffering and condemned by evil men. We hear He was betrayed and deserted by His closest friends... yet we are comforted to know He is our Kinsman-Redeemer Who knows the way we take and is our ever present help in times of trouble. He has promised never to leave us nor forsake us.

The Lord Jesus is a fitting companion to accompany each one of us as we journey through the ups and downs of this fallen world - for He knows and understands all the circumstances that can cast a shadow across our Christian walk or cause us to become weary or distressed. And He cares for each situational barb that wounds our soul so deeply, like a shepherd cares for his straying sheep.

Although true Deity, the Lord Jesus is also fully man, and because He walked this earth before us, He is well-able to sympathise with all our weaknesses and He understands all the problems and pain that we will face in our individual lives.

Although truly human, our Saviour is also a member of the eternal Godhead. He is the One that searches the heart and knows the way of the righteous. He not only is aware of all that is going on in our individual life but has scheduled every day that passes - for our times are in His hands and He knows the paths that we take.

The wicked are the ungodly men and women who refuse to acknowledge Christ as Saviour and because of their wrong choice, they remain under condemnation. They may be 'religious' and they may be 'moralists' but they are under God's wrath because they have not believed on the only begotten Son of God.

The righteous man has recognised that he is a sinner in need of salvation and believes that God sent His dearly beloved Son to die on the Cross for the forgiveness of sin and life everlasting. He believes that Jesus died, was buried, and rose again on the third day, according to the Scripture.

The Lord is intimately connected with each of His own - for all who are saved by grace through faith are united with Him forever and His Holy Spirit is both with us and in us - BUT evil men are condemned. The ungodly will be brought to destruction and the sinner will end up in ruin.

Although this Psalm was originally given to encourage Israel to love the Lord with all their heart and walk in His ways, there is much about which to rejoice, when we read that the Lord knows the way of the righteous. Although the solemn warning was originally meant for Israel, the principle applies to Jew and Gentile alike. Those who deny the truth of God's Word and reject His offer of salvation will perish. They will eventually be separated from their God and Creator forever.

Praise God that Jesus knows the way of the righteous. He knows the way we take, and as we submit to the trials that inflict our soul and the inevitable 'child-training' we will face in life, He has purposed to draw us ever closer to Himself, until we can say with Job, "I have heard of You with my ears but now I see You with a deeper spiritual understanding."

Dear Lord and Heavenly Father, thank You that Jesus is my worthy High Priest and that He has walked this earthly pathway before me. Thank You that He knows and cares about the difficulties I face in my earthly walk. Thank You that the Holy Spirit of Christ is accompanying me through all the changing scenes of life and is with me in every daily task I undertake. May I rest in Your love more each day, in the assurance that You know the path I take, and are bringing to completion the good work that You have started in me. In Jesus' name I pray, AMEN. 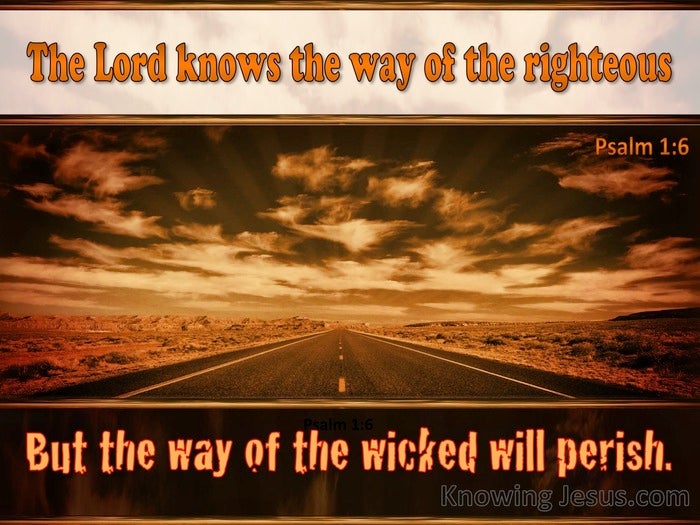 Choose a Verse from Psalm 1