Create in me a clean heart, O God, And renew a steadfast spirit within me. 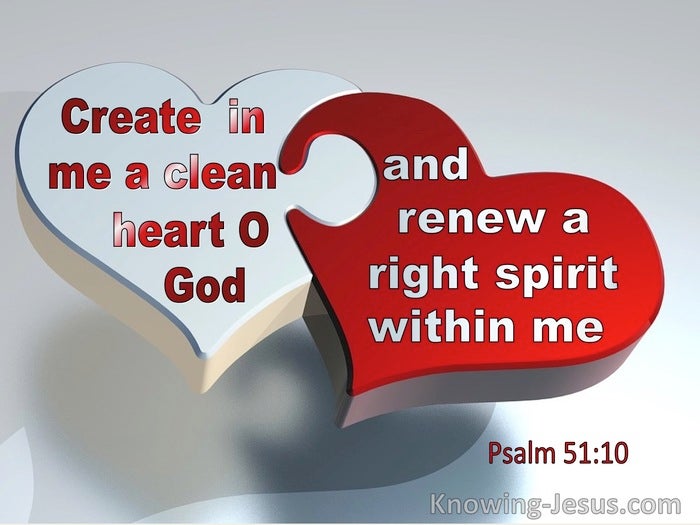 The corrupted gene-pool from our first sinning parents has been passed down the generations of humankind for six-thousand long years, resulting in defilement, disease, and death. No one is exempt from the death-sentence of sin, for ALL have sinned. ALL have fallen short of God's glory and ALL need a Saviour.

Trying to mend the old creation in Adam, is man's futile pursuit, but God will have no dealings with the sordid deeds of sinful man, nor the scarlet sin-nature that permeates every cell of our fallen souls. We were conceived by sinful parents and were born dead in trespasses and sins. The legacy of everyone is that we were born in sin, and at enmity with God.

The essence of pure humanity was breathed into the first Adam by the Lord God Almighty, and man became a living being. God saw all He had made was very good. But Adam's whole nature became twisted and perverted due to sin and death, which entered into the equation of the entire gene-pool of humanity.

Although created in God's image, the progeny of Adam are all begotten in his fallen state, which is riddled with sin and which ends in death. As part of the human race, we are imputed with Adam's sin. Having been born into the human race, we have inherited a fallen sin nature from our fathers. Although we know what is good - we are incapable of doing good in our own strength, and although we know what is evil, we are incapable of avoiding it.

It is only by the redeeming blood of the second Man, (the last-Adam), that we can be washed clean by the cleansing power of the pure water of God's Word. It is only through saving faith in the gospel of Christ that man can be made a new creature and be raised into newness of life.

It was the heart-cry of David to have his heart washed clean of sin, for he recognised the stained condition of his fallen soul. "Create in me a clean heart, O God, and renew a steadfast spirit within me," he cried out. "Cast me not away from thy presence, and take not thy Holy Spirit from me."

David had sinned against the Lord for his own selfish gain and to gratify his own inner lusts. Because of his sin, David's delightful fellowship with God had been severed. His joy in the Lord had been lost and his heart-conscience was deeply convicted. David was acutely aware of the evil he had done. He became increasingly conscious of his rebellious actions... for the sins he committed were ever before his eyes.

Although the bitter fruit of his sin-nature was murder and adultery, David realised that his ungodly acts were sins against the Lord, which had deeply grieved the Spirit of God. "Against You Lord, and You only, have I sinned and done what is evil in Your sight," was David's bitter lament.

David knew the wrong he was committing when he lusted after another man's wife and stained his hands with her husband's blood, in an attempt to hide his adultery. David's soul had been blackened with sin and although he refused to immediately acknowledge his wrongdoing before God, his conscience refused to allow him to forget, until he cried out to God - admitting his sin and praying for a purified heart and a right spirit within.

Unlike David and other Old Testament saints, we never need fear that the Holy Spirit will depart from us, for since the Cross, He takes up permanent residence within each born-again believer. However, like David, we can resist the Spirit, quench the Spirit, or even grieve the Spirit of God, which not only causes our fellowship with the Father to be broken, but can suppress our joy and steal the perfect peace of God within.

But like David, if we confess our sin, God is faithful and just to forgive us our sin, purify our heart, renew a steadfast spirit within, and cleanse us from all unrighteousness. Like David... our insatiable cry should be, purify my heart O Lord. Cleanse me from my sin. Create in me a clean heart. Restore to me the joy of my salvation and renew a godly spirit within me.

May we choose the good and eschew the evil so that our new, born-again-life in Christ (our new-nature in Him) may be increasingly conformed into the image and likeness of the lovely Lord Jesus - until it is no longer I that live (my old sin-nature in Adam) but Christ (the new-life I have in Him) that lives in me - ever prompting me towards Christ-likeness.

Thank You, Father, that in Your wisdom You do not renew and restore the old fallen sin-nature in Adam, but You give us a new nature, a new, born-again life, received through faith in Christ. Thank You for the lessons we can learn from biblical saints like David, who was cleansed of his sin, when he confessed his faults and cried out to You. Thank You for the indwelling ministry of the Holy Spirit, and I pray that You would point out all the areas in my life that grieve You or quench Your ongoing work within. Create in me a clean heart I pray, and renew a steadfast spirit within me, and may Christ be seen in me as I submit to Your Spirit's leading and do only those things I hear from Him. In Christ's name I pray, AMEN. 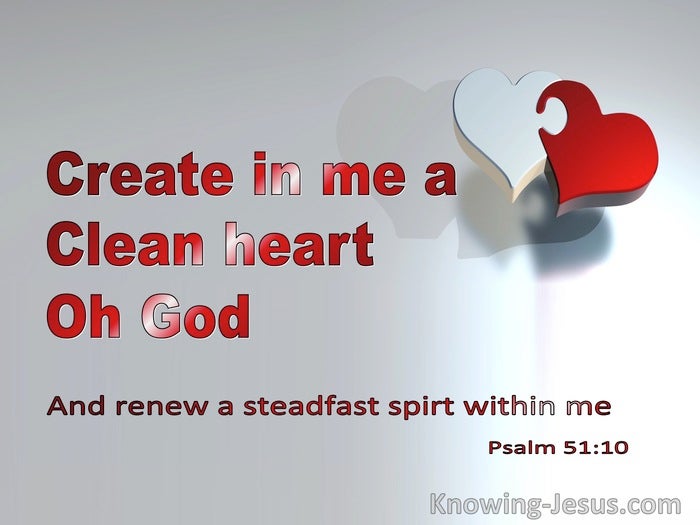 Choose a Verse from Psalm 51