He has also established them forever and ever; He has made a decree which will not pass away. 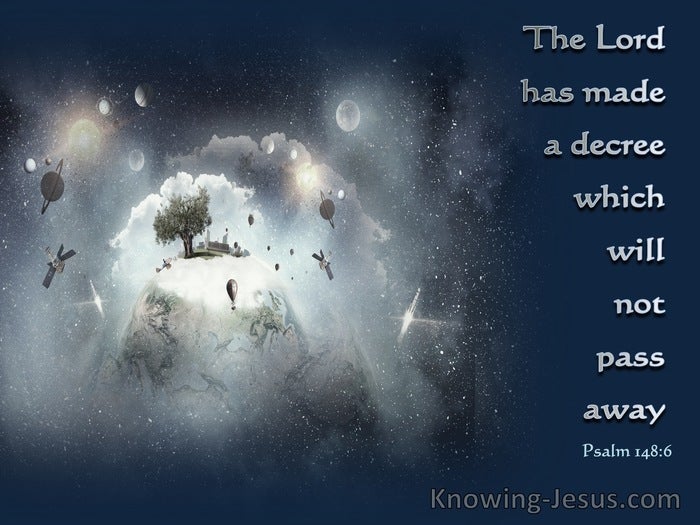 A great chorus of praise and worship is offered up in Psalm 148, from every corner of the cosmos. Both animate and the inanimate sectors of God's creation unite in a great celestial choir and cacophony of praise, to the One who has established them forever and made a decree that will never pass away.

A harmonious host of angelic beings combine their respective voices with the rest of creation, to glorify God and honour the magnificent Maker of heaven and earth. In the beginning, the heavens were made by the Word of the Lord. By the breath of His mouth, He brought forth all their host.

He is the One who painted the canvas of creation and gives permanence and structure to all that He has made. By Him all things were created, both in the heavens and on earth, visible and invisible, whether thrones or dominions or rulers or authorities. All things have been created through Him and for Him.

Through Him, the foundations of the earth were laid and by His wisdom, the seasons were secured in their right rotation. The sun and the moon were anchored within the highest firmament, and the starry heights were positioned in their circular motion. "The Lord has established them forever and ever. He has made a decree which will not pass away."

There is nothing in heaven above, the earth beneath, or the waters under the earth, that are not governed by the Word of the Lord.  Every Word of God is pure and holy. It is a buckler and shield to those that put their trust in Him. For the Lord spoke, and it was done. The Lord commanded, and it stood fast forever.

The Words of the Lord are perfect and unsurpassed. They are flawless, like refined silver. They are purified in a crucible, like gold refined seven times in the furnace of God's terrible truth. The Word of the Lord is altogether right. The Word of His truth can never be broken and will not pass away.

The Lord has decreed the scope and the limits of His creation, and nothing can thwart His perfect plan. He has set in motion His timeless laws, which cannot be halted. The Lord commanded, and they were created. He spoke, and they were formed. He established their boundaries and secured the paths that they must follow, and He has established them forever and ever, amen.

Nothing in God's creation is too lofty to participate in this symphony of praise. No one in heaven or earth is too insignificant to be excluded from worshiping the almighty Creator. He flung stars into space and set them on their daily course, and He knit us together in our mother's womb, and scheduled every day of our little lives. At the name of Jesus, EVERY knee will bow and every tongue will confess that Jesus is Lord, to the glory of God the Father.

From the day they were created, the four living creatures cry holy, holy, holy is the Lord God almighty, and into the eternal ages to come this great chorus of praise will continue to reverberate throughout the visible and invisible universe, in reverent worship of the Lord God of heaven and earth. He made us and He loves us. He loved the world so much that He gave His only begotten Son to be our Kinsman-Redeemer, so that whosoever believes on Him would not perish, but have eternal life and become part of that never-ending celestial chorus.

Never let us become complacent or careless about the God Who established the heaven and the angelic hosts. Never let us wander from the Lord, Who made us in His own image and set sun, moon, and stars in their courses above, for signs and for seasons, and for days and for years.

Let us rejoice in the Lord Who established the works of His hand and decreed that they will never pass away. Let us worship before the throne of grace, and offer Him our unending thanksgiving and praise for sending Jesus to be the sacrifice for our sin, and the Firstfruit from the grave.

How I praise and thank You, Heavenly Father, for all that You have created. Praise the Lord, for You are worthy of all honour from the heavens above and the earth beneath. Thank You for sending Jesus to be my Redeemer, and thank You that He was willing to stretch out His arms of love for me, on the Cross of Calvary. You alone are worthy of all honour and glory, for all that You are, all that You have done, and all that You have promised to do. Thank You that the works of Your hand are established forever and Your decrees will not pass away. How I praise You that I will be part of that celestial chorus to honour You in the ages to come. In Jesus' name, I pray, AMEN. 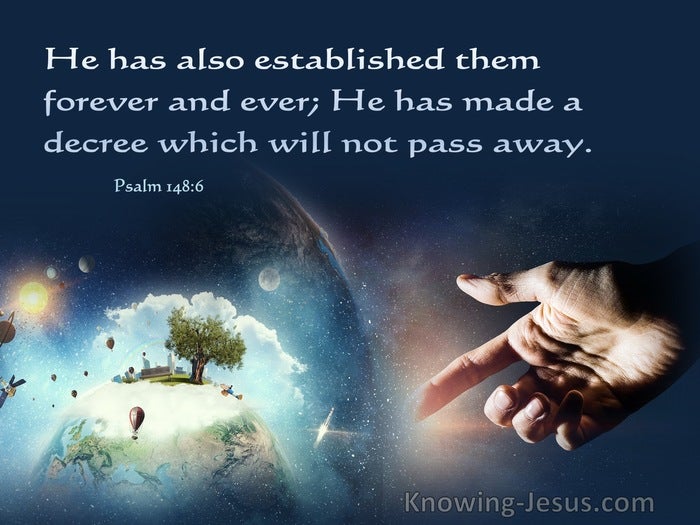 Choose a Verse from Psalm 148