This is the day which the LORD has made; Let us rejoice and be glad in it. 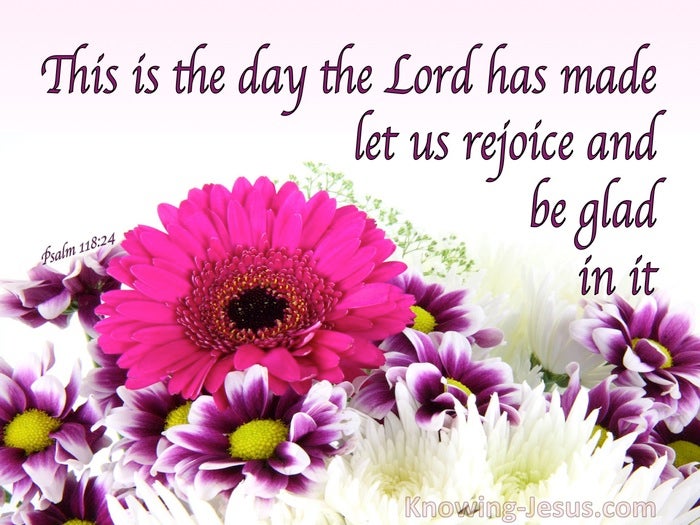 We love to look out on misty mornings, stunning sunsets and a sun-kissed field of corn and say, "this is the day that the Lord has made. We will rejoice and be glad in it." Indeed, it is good to praise the Lord for the wonderful works of His mighty hand. But this lovely verse, which is right in the centre of scripture, has a far more significant meaning.

Psalm 118 is a very important Messianic psalm that points directly to God, Whose goodness and grace lasts forever, and it identifies JESUS as Israel's Messiah, Who has become their strength and stay. And Jesus is our Redeemer as well. This is a psalm that rejoices over our great salvation and points directly to the Lord Jesus as our mighty Deliverer.

This is the song of rejoicing and praise which Israel will sing on that thrilling morning when their long-awaited Messiah rides into Jerusalem in power and great glory at His second advent. Then He will set up His eternal kingdom, in the midst of His people Israel, as King of kings, Lord of lords, the Messiah of Israel and Saviour of ALL.

What a day that will be. What rejoicing will flood the earth for this is the great day towards which the Lord's plan of redemption has been steadily moving for millennia. This is the day when God's favour towards mankind will reach its fulfilment. This is the day when there will be a resounding chorus of great joy, as all God's people unite together with one great chorus of praise, as we sing in unison, "This is the day that the Lord has made, we will rejoice and be glad in it. Oh give thanks to the Lord for He is good, His mercy endures forever."

At His first coming Jesus came to His own people, but they rejected Him, and yet He was the royal Son of David - the Anointed of God. He was the Stone which the builders rejected, yet He is the One who became the chief Cornerstone. The man who falls on the Stone will be broken to pieces (saved by grace through faith) BUT on whosoever that Stone falls, (the unbeliever) will be scattered like dust.

At His first advent, they disapproved of His birth. They criticised Jesus because He was from Galilee. They disapproved of His lack of formal education and were highly critical when He exposed their hypocrisy, religiosity and man-made traditions. They condemned Him for being a friend of tax collectors and of eating with prostitutes. They closed their ears to His teaching, their eyes to His miracles and their heart to His message.

At His first coming, it was a Roman sword that pierced His side, from which poured redemption's blood-red stream over the sinful race of fallen man - as a dying, sin-cursed earth, groaned beneath the weight of sin, waiting in hope for this special day of redemption. And the sharp, double-edged sword that proceeds from His mouth at His second coming will destroy the wicked in the day of wrath, and the earth will be filled with the glory of God as the waters cover the sea.

This will be a day of great rejoicing and much joy, a day of blessing and grace, of health and happiness, of righteousness and justice, of prosperity, peace and pardon. This is the day when crowds will gather at the glorious second advent of Israel's long-awaited Messiah and all nations will join in the joyous celebrations to honour the Lord most high.

This is the day of Christ's glorious exaltation, which began with His rejection and humiliation at Calvary's cross, but will climax on His great coronation day. How we look forward to that day, when together we will sing, "This is the day that the Lord has made. We WILL rejoice and be glad in it!"

Praise Your name, O Lord most High. You are worthy of all praise and glory from this time forward, and forevermore. Glory be to the Father and to the Son and to the Holy Spirit. Praise You for this Day of days, when the Lord Jesus will be King over all the earth. We will rejoice and be glad in it. In Jesus’ name, AMEN. 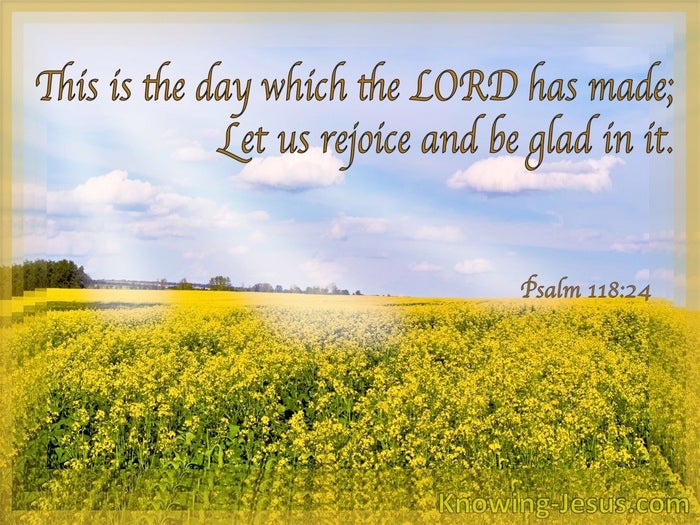 Choose a Verse from Psalm 118

Out Of This World