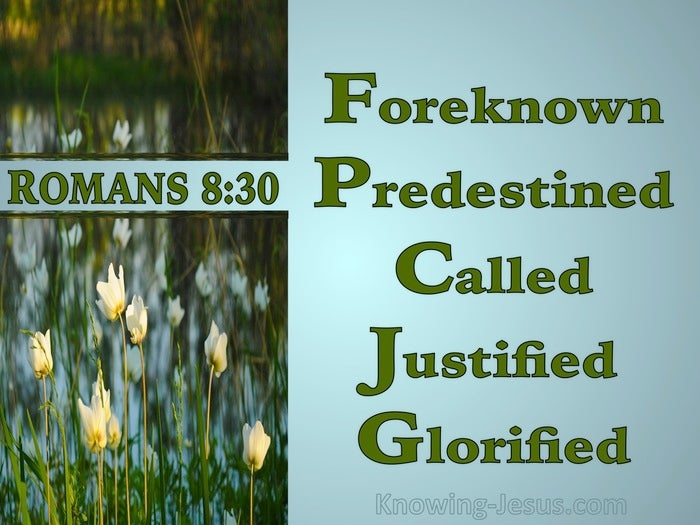 God knows the end from the beginning. He understands the secrets of the heart and the prayers we will utter before they are formed in our minds. God knows the decisions we will make in our lives.. before we were even conceived in our mothers' womb. God foreknows all those who are His children, because God knows the freewill choices that we will make, long before we do. God's knowledge is based on His omniscience wisdom, for: those He foreknew, He also predestined to become conformed into the image and likeness of our Saviour Jesus Christ - first born into the old creation in Adam and then reborn into the new creation in Christ, by faith.

God foreknew before the world began whether you or I would trust in the death, burial and resurrection of His only begotten Son, and based on God's uncreated wisdom and His omniscient understanding of everyman's salvation choice, He planned to bestow many unsearchable riches of graces upon on all who would freely trust in Christ as their Redeemer and Lord - and those whom He foreknew, He also predestined to become conformed into the image of His dear Son.

This glorious transformation is accomplished through sanctification, which is carried out in two beautiful ways.. First:- by the working of the Holy Spirit in our lives at initial salvation. At rebirth we were positionally sanctified.. we were set apart forever unto God by grace through faith in Christ.. we were born again.. we were accepted in the Beloved and declared holy unto God. But secondly:- we are also being sanctified experientially by faith. As we journey through life we are going through a process of sanctification, which is only finally completed when we go to be with Jesus and see Him as He is.

The enormity of this truth staggers the finite and limited understanding of man. God in this simple verse is stating that ALL who freely choose to trust in Christ as Saviour can have an assurance that they will one day be glorified. And that will happen when we finally behold His face at the glorious resurrection - for the trumpet will sound and the dead in Christ shall be raised incorruptible and we that are alive and remain will be caught up into the clouds, together with all the resurrected saints in this Church age - and at last we shall be like Him, for we shall see Him is He is.

God knows the decisions we will make in our lives before we were even conceived in our mothers' womb and He foreknew, before the world began, whether you or I would trust in Christ for salvation. And based on God's uncreated wisdom and knowledge of everyman's choices - He can state as fact that those He foreknew before the foundation of the world will one day be glorified - because the one He foreknew He predestined to become like Jesus. And the ones God predestined to become like His Son are also the ones that He called - and those that God calls are also the ones that are born again, redeemed, justified and positionally placed into Christ, by grace through faith in Him. And then ALL who are justified will one day be glorified - when we see Christ as He is.

In the meantime we are being sanctified. OH we were positionally sanctified at the point of rebirth. When we trusted Christ as Saviour we were positioned IN Christ - placed into His Body. We were set apart to be holy the moment that we were justified by faith. But it seems that God chose not to include the word 'sanctification' in this list of facts - facts that rest on God's foreknowledge of our salvation - and which is finalised when we are glorified at Christ's return.

You see, the sanctification process depends on the choices that we make in our Christian life.. whether we live as unto the Lord and die to self, OR live to the flesh and please our carnal nature. One honours the Lord and one dishonours Him. One results in rewards and one results in the loss of rewards.

All those who are being sanctified will one day be glorified: for those He foreknew....... He glorified. This is a fact that rests on God's pre-determined will and omniscient knowledge. But we have a choice in life... to live godly in Christ Jesus and produce much fruit to His honour and glory OR to live to the flesh and be barren of fruit and deny the Lord Who bought us. Praise God that we are eternally secure.. but may we also choose to live godly in Christ Jesus to His praise and glory - and for our eternal benefit.

Heavenly Father, I stand amazed at Your knowledge and wisdom, but I stand in awe that You should love us so much that You gave Your only only begotten Son, to die on the cross for me, so that by grace through faith in Him I have been predestined to be conformed into the image and likeness of Jesus - and one day will see Him as He is. I pray that I may live my life as unto the Lord, forgetting that which is past and pressing on toward the goal for the prize of the upward call of God in Christ Jesus, in Whose name I pray, AMEN 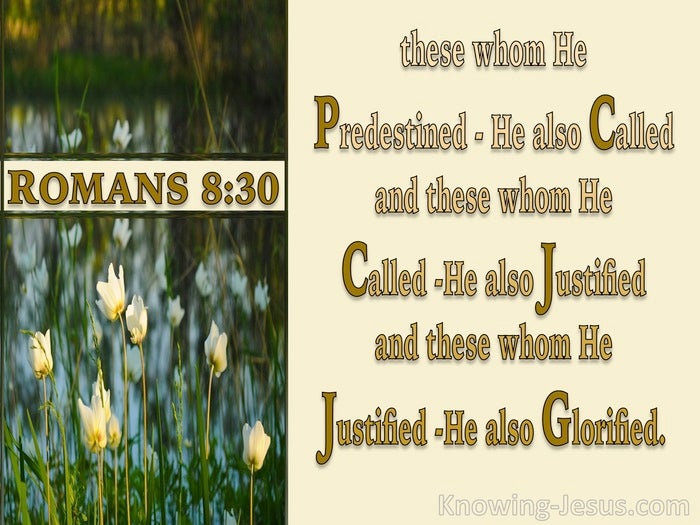 Choose a Verse from Romans 8