Or do you think lightly of the riches of His kindness and tolerance and patience, not knowing that the kindness of God leads you to repentance? 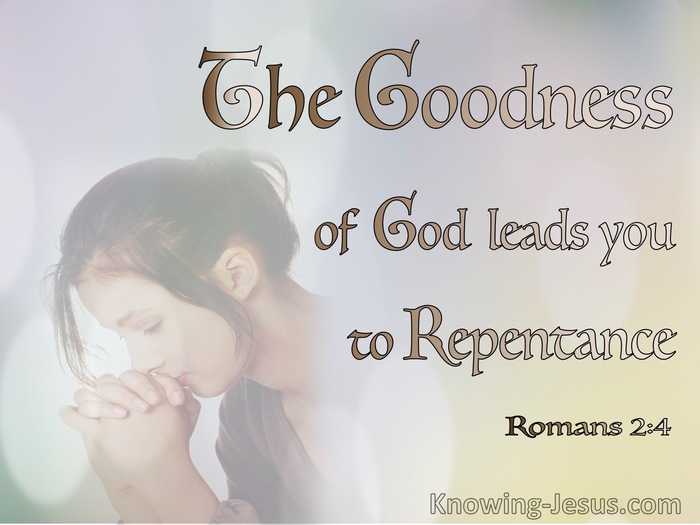 It was man who brought sin into the world and the wages of sin is death. But sin in all its guises and disguises must be judged, for a holy God cannot look on sin. Sin must be punished, and the ultimate consequence of sin is eternal separation from God. Sin inflicts a never-ending divorce from all that is good, and clean, and lovely, and pure, and honourable, and righteous, and holy. And in the final analysis, the verdict is that man is without excuse.

Paul in his first chapter of Romans, builds up the most magnificent and logical argument that the Gentile world is guilty before the Lord. Although they knew God, they suppressed the truth in unrighteousness. In spite of the overwhelming evidence of His handiwork in the created world around them, and despite the still, small voice of conscience within, man became willingly ignorant of God. When men indulge in such gross idolatry, self-indulgence, and self-deification, God gives them over to their depraved minds and abandons them to their sinful ways.

But it is not only the Gentile nations that are identified with this guilty verdict. The people of Israel similarly stand condemned before their God, for all have sinned and all fall short of the glory of God. There is no one that can attain to the perfection of Christ. Paul lays bare the truth that Israel is equally guilty before the Lord... despite being brought into covenant relation with Him.

Israel were chosen by God and given many spiritual advantages. They were the only nation chosen to be His people and to live in a covenant relationship with Him. They were to be a light to the Gentiles and received many material privileges and promises... including a land flowing with milk and honey. They were promised a future kingdom of peace and prosperity on earth, where they would be the head and not the tail of the nations.

But Israel rebelled against God, and followed after the way of the Gentiles. They erroneously thought that because they were given the Law, the Temple, the Priesthood, and the Promise, they would escape God's punishment and be exempt from His wrath. But Paul's water-tight argument, condemning ALL mankind, could only reach one possible conclusion - God is the only righteous judge and His judgements upon all mankind, are inescapable and just.

Man's hypocritical judgements of his fellow man, is according to his own depraved mind. A self-righteous, judgemental attitude is inexcusable... but the judgement that is in accordance with God is rooted in truth. The judgements of the Lord are founded on His righteous character and gracious love... and for that reason, we discover the Lord withholding His inevitable judgement on both the children of Israel and the Gentile nations - giving each one an opportunity to repent of their sin and turn to Him.

The wrath of God, which must eventually be poured out on all sin, if His justice is to be fully satisfied, was delayed... to give men the time to repent of their sin. God has been delaying His judgement and postponing His punishment, to give sinners every opportunity to repent.. for it is not God's will that any should perish, but that all should come to faith in Jesus Christ.

It is the riches of His kindness, His tolerance, and patience, that have been instrumental in withholding judgement on this God-hating, Christ-rejecting, sinful world. Every day God's wrath is delayed, is one more day of grace, when Jew and Gentile alike are being convicted of sin, brought to repentance, and receiving salvation through faith in Christ.

It is only God's compassion and mercy... His long-suffering kindness and grace, that enables sinners to be saved through faith in Christ. It is only by His grace that men are moved out of the kingdom of darkness into the kingdom of His dear Son. It is only God's never-failing faithfulness and incomparable kindness that enables born-again believers to grow in grace and in a knowledge of Christ - as they dwell in Him and He in us.

As believers, we are not only saved by grace when we believe on Christ for salvation, but we are also given the sufficient grace to live by faith because of the riches of His kindness. The tolerance and patience of God towards His saved people, leads us to confess our faults, turn from sin, and be returned into fellowship with our heavenly Father. May we never think lightly of the riches of His kindness, tolerance, and patience.

How privileged we are to be God's children, who are secure in the blessed hope we have in Christ. Never let us be tempted to wish our lives away or resent what we perceive as delays in Christ's return.

May we always remember that God's delay is often a demonstration of the riches of His kindness, tolerance, and patience, toward carnal Christians, as well as lost sinners - which is leading many to repentance and salvation... for the forgiveness of sin, and security in Christ. Let us rather praise and thank our heavenly Saviour that in Him we have been made citizens of heaven - and will one day receive our heavenly inheritance in Christ.

Father, I often take for granted Your loving-kindness, and carelessly wander far from You. Thank You for Your grace and patient-endurance towards me. I confess my faults to You, and I choose today to turn away from my own carnal desires and return to trusting You in all things. I pray that I would quickly reject the things that have grieved You, and thank You for Your grace, Your love, Your forbearance, and patience. Continue to draw me back once again into Your sweet arms of comfort and enjoy gracious fellowship with You. This I pray In Jesus' name, AMEN. 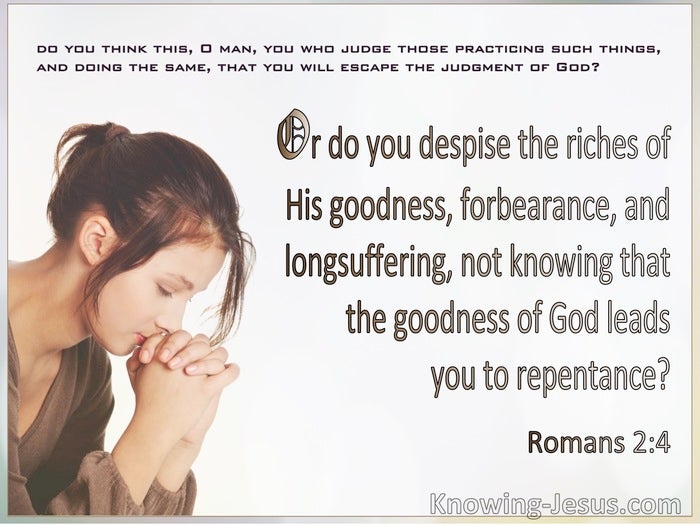 Choose a Verse from Romans 2 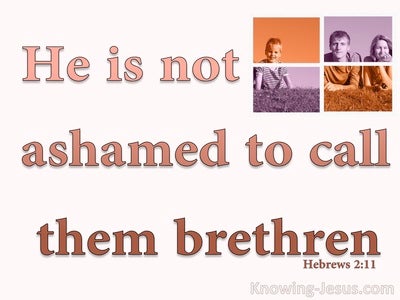