Will You restrain Yourself at these things, O LORD? Will You keep silent and afflict us beyond measure? 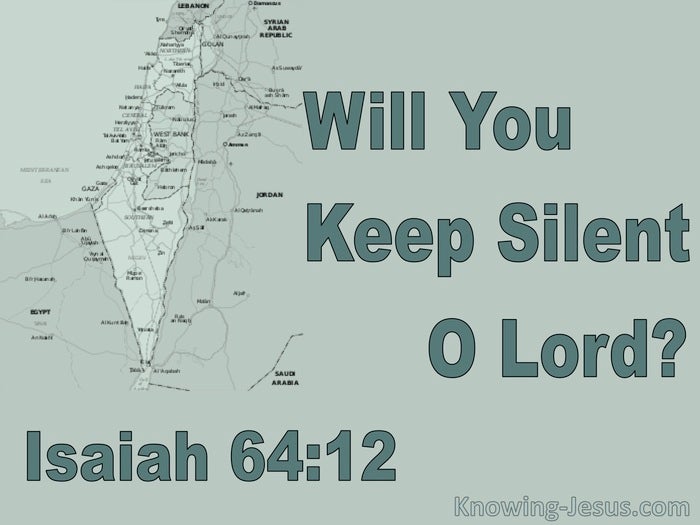 Throughout Israel's history there has always been a little remnant of believers, who have trusted the word of the Lord, and God has credited them with righteousness. Some of their names are listed in Hebrews 11, and some of the sufferings they had to undergo are referenced in that chapter.

Isaiah was part of the faithful remnant of Israel, and he was also ordained by God to foretell many of the travesties that would befall the stricken nation. However, his writings contain much that offers comfort and hope, to those that are called by His name.

God is always faithful. His promises are sure and His mercies are new every morning, but His ways are not our ways and His timings rarely fit in with our hopeful expectations. The Lord is true to His word and His promises never fail, but things rarely happen the way that we expect them. The Lord is merciful and His Word is true, but His appointed time rarely take place at the moment we would like.

But throughout Israel's chequered history, there has always been a prayerful remnant, who have earnestly sought the Lord, and made confession of their continuing trust in Him, and His never-failing goodness to Israel. And through the words of this chapter, Isaiah records the pleading heart of God's faithful people, as they questioningly cry out: Will You restrain Yourself at these things, O Lord? Will You keep silent and afflict us beyond measure?

Israel were God's chosen people and His adoptive son, but the nation had become increasingly petulant and disobedient, and a holy God is bound to punish sin and to discipline His people for their transgressions. But the prayer of this little remnant does not reflect despair, dejection and demoralisation.. but rather a spark of hope, that God will certainly hear and answer their cries for help.

And so they rehearsed.. in the ears of the Lord, all the destruction of what took place in the holy city of Jerusalem, together with the tragic burning of the glorious Temple of the Lord, and they pleaded expectantly: LORD! after all this, can you hold Yourself back? Can You keep silent and punish us so severely?

Well, God's love for His people never fails and His response to their cry was loud and clear, in the next chapter. Though judgement was necessary, and punishment inevitable, due to the nation's ongoing disobedience, nevertheless, the promised kingdom of righteousness would one day be set up, where peace and prosperity would be established, and all God's promises to His people would be fulfilled.

God's promises to Israel will never fail, and those that love the Lord, trust His Word, obey His command and honour His name, will one day receive the reward that was promised to Abraham and His seed.

And as members of Christ's body, in the post-cross dispensation of grace.. we too should follow the example of this faithful, little remnant in Israel, who despite the terrible sufferings they experienced, both individually and as a nation.. were men and women of faith, who continued to trust in the Lord with all their heart, and did not lean on their own understanding.

Like them, we too need to acknowledge the Lord's hand in all things, as we learn to wait patiently and trustingly, for His perfect plan to unfold and His perfect will to be carried out - in His perfect timing and His own, perfect way.

Heavenly Father, thank You for the example of Israel's faithful little remnant, who continued to trust You, in spite of all the suffering and pain they endured. Keep me from being discouraged by all that is happening in my life and the wider world, and may I continue to trust You in all things - knowing that Your plans and purposes are perfect, and that Your promises are all 'yes' and 'amen'.. in Christ Jesus our Lord, in Whose name I pray, AMEN. 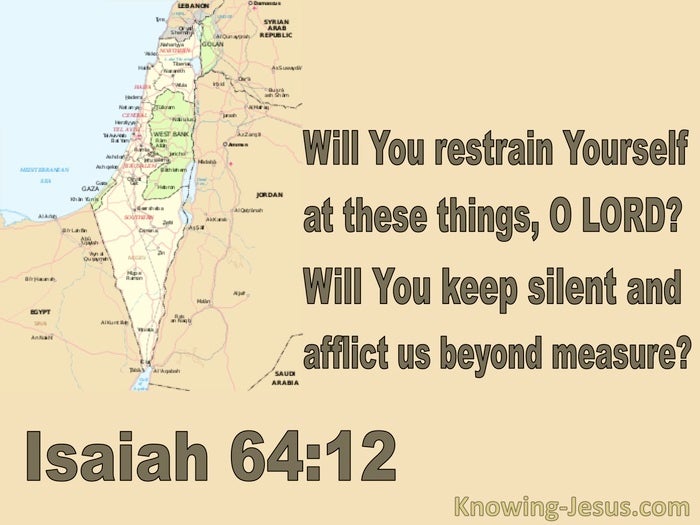 Choose a Verse from Isaiah 64