For thus says the high and exalted One Who lives forever, whose name is Holy, "I dwell on a high and holy place, And also with the contrite and lowly of spirit In order to revive the spirit of the lowly And to revive the heart of the contrite. 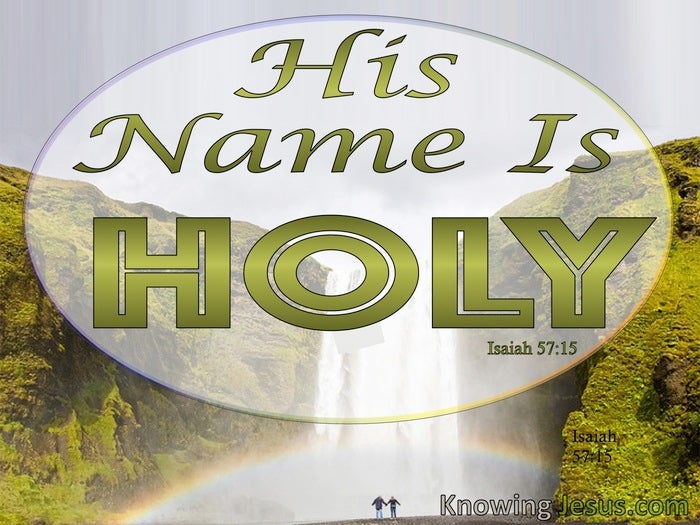 So superior and elevated is the eternal Creator and Lord of the universe, that He is the most highly exalted personage, standing in contradistinction to humanity and all the created heavenly hosts. No thought or action from man or the angelic realm can confound the mind of God. Nothing can take Him by surprise, for He is the One Who fills all in all.

He identifies Himself as the great and exalted One Who lives forever and Whose name is Holy. "I dwell on a high and holy place.." is His claim throughout Scripture. He created time, space, matter, and man. He stretched out the heavens and tramples the waves of the sea.

He is the High and Lofty One, Who not only inhabits eternity, but Who lives with man, "'For thus,' says the high and exalted One Who lives forever, whose name is Holy, 'I dwell on a high and holy place, but also, I live with the contrite and lowly of spirit, in order to revive the spirit of the lowly and to revive the heart of the contrite.'"

Despite the exalted magnificence and almighty splendour of the thrice-holy God, His desire is to renew a right spirit within the heart of lost souls who are dead in sin and at enmity with Him. In spite of inhabiting eternity and dwelling in high, heavenly and holy places, this same Almighty God has chosen to live with those who are meek, and lowly, and humble of heart. He has chosen to redeem the penitent, revive the contrite in spirit, and dwell in the hearts of all who believe on His name.

The same God Who flung stars into space and spoke this world into being... lives with man, and indwells His Church. He is the eternal Father Who resides outside time and space and yet He is always present with each of His own. He is close to those who are crushed in spirit and gives heed to those that reverence His holy name. He has promised to feed the hungry heart, comfort the sorrowing soul, and redeem a right spirit within those who trust His name.

Isaiah had been teaching that righteousness is the only basis by which sinful man may be justified in the sight of the high and exalted One, Who lives forever and Whose name is holy. But like her Gentile neighbours, apostate Israel lacked the standard of holiness required to be accepted by God, and to stand in His awesome presence and be accepted into fellowship with Him.

What a contrast between the absolute, invincible, omnipotent, omniscient, omnipresent, supreme, unlimited, eternally holy God, and the helplessly impotent, powerless, weak, feeble, insignificant, paltry, poor, unholy sinner. Like all sinners throughout the history of man, the only way to be declared righteous by God is through His full and free enablement - which comes through faith.

It is only repentant sinners who are given peace with God. It is only those who are contrite of heart and lowly of spirit who will be revived by the Lord and redeemed from the slave-market of sin. Only those who believe God's Word are declared righteous and restored into fellowship with the high and exalted God - Whose name is holy and Who rides on the wings of the wind.

Only those who are lowly of spirit and contrite of heart can be revived. Only those placing faith in His grace and mercy, through trusting in God's sin-substitute for salvation will be revived, redeemed, and restored. Only the contrite in heart who trust His Word will be comforted in all their deep distresses.

He will renew the spirit of every man or woman who walks humbly before Him and He will give courage to those that are crushed by the burden of sin - for He alone is the High and Lofty One Who lives forever and ever - and holy is His name.

Loving Father, I never stop being amazed that You Who, from everlasting to everlasting, has stooped to save and comfort me and to dwell within my heart by faith. Keep me low at the Cross and humble before you, develop in me a lowly and contrite heart and revive my spirit within me, I pray. I praise You for Your goodness and grace, Your mercy and love, and pray that today I may glorify You in my body, in word and in deed. In Jesus' name, AMEN. 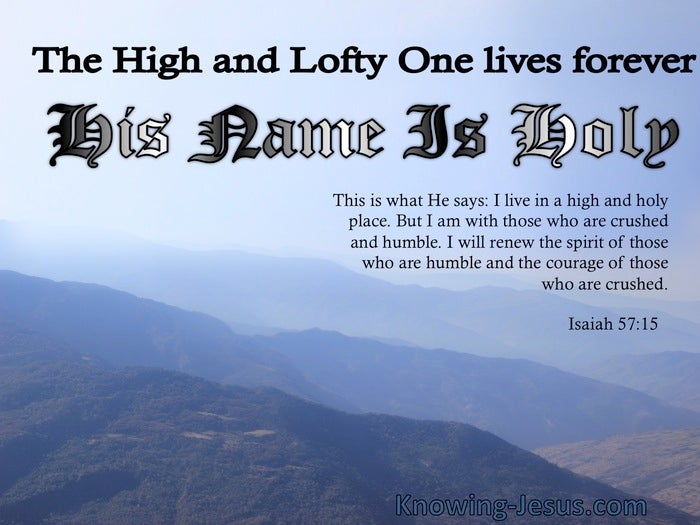 Choose a Verse from Isaiah 57 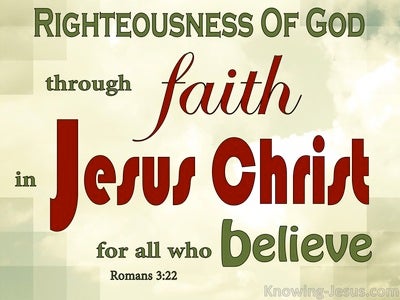