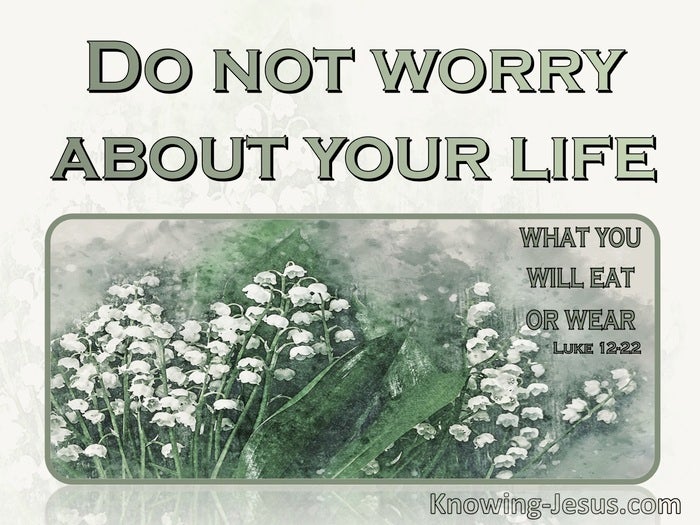 Somehow in the human psyche, we quite 'like' to have a few 'worries' under our belt. Everyone seems to be worried about this and that... about relationships and redundancies, life and living, health and happiness, food and finances, the government and global issues, sleeplessness, stress, strain, and supply. But the Lord Jesus, in this extended dialogue to His followers, warns of the foolishness of fretting and futility of worry, for it results in a fruitless and defeated life.

However, the Lord's warning is of even greater significance, for to embrace worry instead of casting all our burdens upon the Lord, demonstrates a serious lack of faith in God's Word. It casts the shadow of doubt on His precious promises of provision, which discredits His holy character.

Christ ends His dialogue with the accusation, "Oh ye of little faith." Despite witnessing God's miraculous hand of blessing through Christ's Word and witness, their hearts were filled with worry and doubt. Worry is needless and wrong. Worry is futile and destructive. Worry discredits God and demonstrates unbelief. Worry in a single word is 'sin'.

Worry is not only an ungodly state of mind that is often triggered by circumstances of life, but is also a choice of the will, where we imagine the worst scenario, which gives birth to mental imbalance and a restless heart. Worry too often triggers physical illness and spiritual frailty. Worry is an incubator for depression and discouragement and should be shunned.

The Lord Jesus had just told a number of parables to illustrate the futility of worry and the wisdom in maintaining an eternal perspective throughout the ordeals of life, which we all inevitably face, which is why He said to His disciples, "For this reason I say to you, do not worry about your life, as to what you will eat; nor for your body, as to what you will put on."

And so, to His disciples, Jesus gives the serious warning to take no thought for your life. Don't be concerned about things like food or clothing. There is so much more to this life than the clothes that we wear, the work that we do, the food that we eat, and the life that we live. The lilies are clothed and the birds are fed, and yet so often we, who are made in His image and likeness and have been adopted into His heavenly family, fret and worry about many things that should be handed to the Lord in prayer - no wonder He gently rebukes us for our lack of trust in His provision.

Christ not only warns of the danger of following after the fluff and glitter of this world's dainties, but points out that an over-anxious pursuit of the simple necessities of life, runs counter to an attitude of utter reliance on God for our daily provision. Faith in God and trust in His Word, is the foundational principle that floods Scripture from beginning to end. We will most likely have to face increasing hardship in this sin-soaked world, and sometimes it is those very difficulties that God is using to conform us, day by day, into the likeness of His Son, Who had no-where to lay His head, but spent His entire earthly life having utter trust in His Father.

We all live in the same fallen world and are surrounded by imperfect people and unscrupulous individuals with a sin nature - and we sometimes make mistakes! This results in interpersonal problems, financial hardship, health problems, daily disasters, and unavoidable conflicts... which result from the foolish mistakes or premeditated actions of other people... or ourselves. But Jesus spent some considerable time instructing His disciples to trust Him and not to worry about the things we need in life.

The Bible is replete with verses instructing us to FEAR NOT, to HAVE FAITH, and to cast our burdens upon the Lord, Who has promised to keep and sustain us. We are similarly informed that He will never allow the righteous to be shaken and to be anxious for nothing, but in everything by prayer and supplication with thanksgiving, we are to let our requests be made known to God, for when we trust in the Lord with all our heart, His incomprehensible peace will guard our hearts and minds in Christ Jesus.

May we take to heart the words of Jeremiah, who faced incredible hardship in his ministry, "Blessed is the man who trusts in the Lord and whose trust is the Lord. For he will be like a tree planted by the water, that extends its roots by a stream. He will not fear when the heat comes, but its leaves will be green, and it will not be anxious in a year of drought nor cease to yield fruit."

May we call to mind the wisdom of Paul, who faced every kind of disaster and difficulty in life, and refused to translate it in to worry, but wrote in his epistle to the Romans, "For I consider that the sufferings of this present time are not worthy to be compared with the glory that is to be revealed to us."

Father, I confess that I worry about many things, rather than trusting Your Word implicitly. Help me to learn to cast all my cares upon You, day by day and moment by moment. As each worry and concern forms in my mind, I pray that I would take that thought captive to Christ. I pray that with Your help, I will look to You and hand over my anxious thoughts to You, knowing that You have promised to carry me through all of life's difficulties and provide for the needs of me and my family. Thank You for Your goodness and grace. I pray this prayer in the name of Jesus, AMEN. 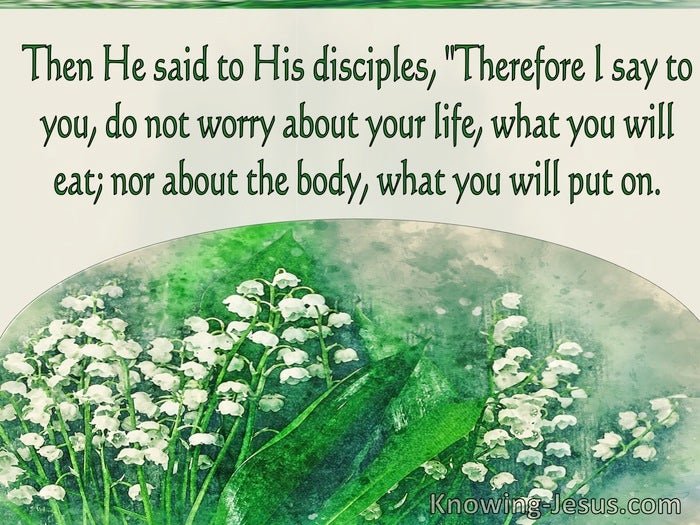 Choose a Verse from Luke 12