"For the gate is small and the way is narrow that leads to life, and there are few who find it. 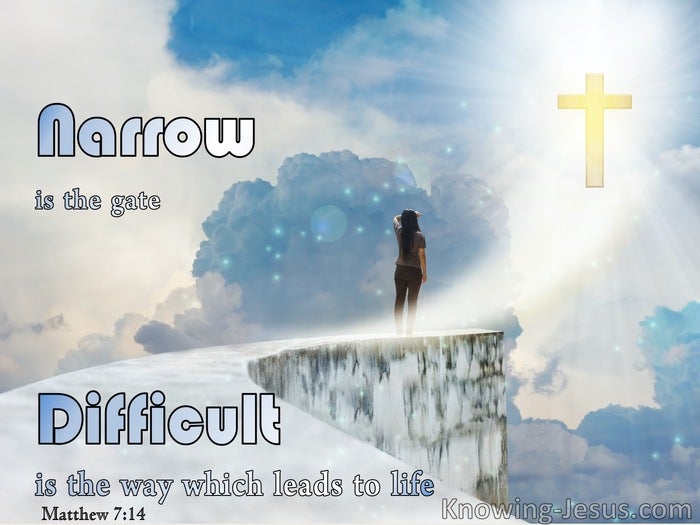 Christ's Sermon on the Mount covers every area of godly living and right thinking. Unlike the Mosaic Law, it is not a series of rules and regulations. It is not a list of instructions on 'do's' and 'don'ts'. His sermon was an authoritative teaching that laid out general principles for life and living. These principles can be applied to every facet of life and are relevant in every situation we may encounter.

Jesus had come to the lost sheep of the house of Israel. He came as the Messiah of Israel and King of the Jews. He came to set up the Millennial Kingdom on earth. The instructions He gave in his sermon, set out the standard that would be required of all citizens under His rulership. "Whatever you want others to do for you, do also the same for them," was the core of Christ's golden rule for His subjects, which succinctly embraced the entire teachings of the Law and the Prophets.

Much of Christ's Sermon on the Mount was scathing towards the Scribes, Pharisees, and Rulers of the people. It contained many critical comments about the religious teachers and their legalistic attitudes. He accused them of a, 'do as I say and not as I do' attitude, which was the antithesis of Christ's principles and practices for godly living and right-thinking.

Jesus was teaching the people that it is not what you DO that will get you into His kingdom but what you BELIEVE. It is not what you DO that earns you salvation, but in Whom you believe. Salvation cannot be earned. It can only be received as a free gift from God. Jesus was teaching that redemption from the slave-market of this world, into the freedom of Christ's Millennial Kingdom, depends on what you believe and not what you do. Salvation is conditional on faith in Christ and not one's personal merit or good works.

Jesus was actually presenting TWO ways to be saved, but only ONE is possible for the fallen race of men. EITHER, live a sinless life by keeping the entire Law OR believe on the Lord Jesus Christ for salvation. The first way was shown to Israel through the Mosaic Law. Only perfection in everything, including actions, attitudes, words, and motives, towards God and others, is sufficient to gain salvation. But ALL have sinned. All fall short of God's glory. All have broken God's perfect Law. All are condemned and all need a Saviour.

No one in the entire human race can reach the standard of perfection that God requires, and the Mosaic Law was given to Israel to demonstrate this truth. The Law was given to show that righteousness is not something that can be earned through merit or gained through good works, because the perfect Law is impossible for imperfect man to achieve.

Christ's sermon was designed to show that entrance into His kingdom did not only depend on good works, but a pure heart and godly motives - none of which are attainable by fallen humanity. Jesus was showing that the only way to enter the kingdom of heaven and participate in Christ's millennial rule on the earth is to be saved. We are saved by grace through faith in JESUS CHRIST, and this is non-negotiable.

The Lord Jesus is the one and only righteous man, Who has ever walked this earth. There are many that attempt to make it into the kingdom through their own ability, education, good works, bank balance, and religiosity. There are many who think that a pious attitude and generous giving is sufficient to grant access into Christ's kingdom. The Jews proudly considered that their Jewish heritage automatically granted them this favour - but Jesus corrected this thinking by teaching, "the gate is small and the way is narrow that leads to life, and there are few who find it."

Christ was showing that the outward righteousness and excessive religiosity of the Pharisees was a broad road that leads to hell. Those who attempt to get into heaven through their own merit are on a path to destruction, "for the gate is small and the way is narrow, that leads to life," was Christ's sober lesson, "and there are few who find it."

The proud legalists of Christ's day and the self-righteous religious-minded men who commended themselves on keeping the letter of the Law, had missed the whole point of the Old Testament Law and Prophets. They refused to recognise their Messiah. They dismissed His teaching and would not heed the truth from One Who said, "I AM the way; I AM the truth; I AM the life - no man comes to the Father except through ME."

Today there are still proud, legalistic, self-righteous, religious-minded men and women who are blinded to the narrow WAY that leads to life. There are many that refuse to accept the TRUTH and do not find the path that leads to LIFE everlasting. It is not God's will that any should perish but that all should come to faith in Christ. May we be ready and willing to speak the TRUTH in LOVE to those that are lost in their own, self-importance, and by God's grace may some be snatched from the broad path that leads to destruction.

Heavenly Father, thank You that in Your grace, You brought me to an understanding that the gate is small and the way is narrow that leads to life. Thank You that by faith in Christ, I have found the Way to life and discovered Him to be the truth of the glorious gospel of grace. I pray that You would have pity on those that remain dead in their sin. Have mercy on those who through pride and their own self-sufficiency, have not yet found the narrow way that leads to life. Use me I pray, in whatever way You choose, to speak the truth in love to those who are on the broad way to destruction, and bring many into Your kingdom this day, I pray. In Jesus' name, AMEN. 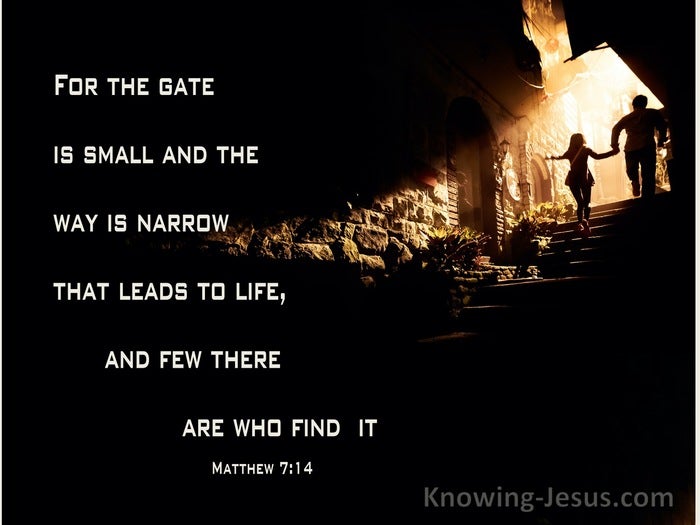 Choose a Verse from Matthew 7 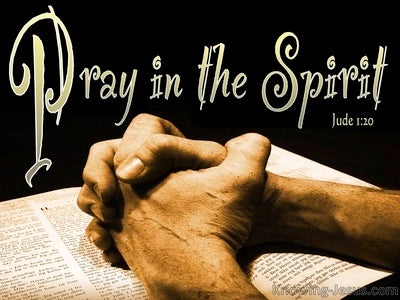