Then He opened their minds to understand the Scriptures, 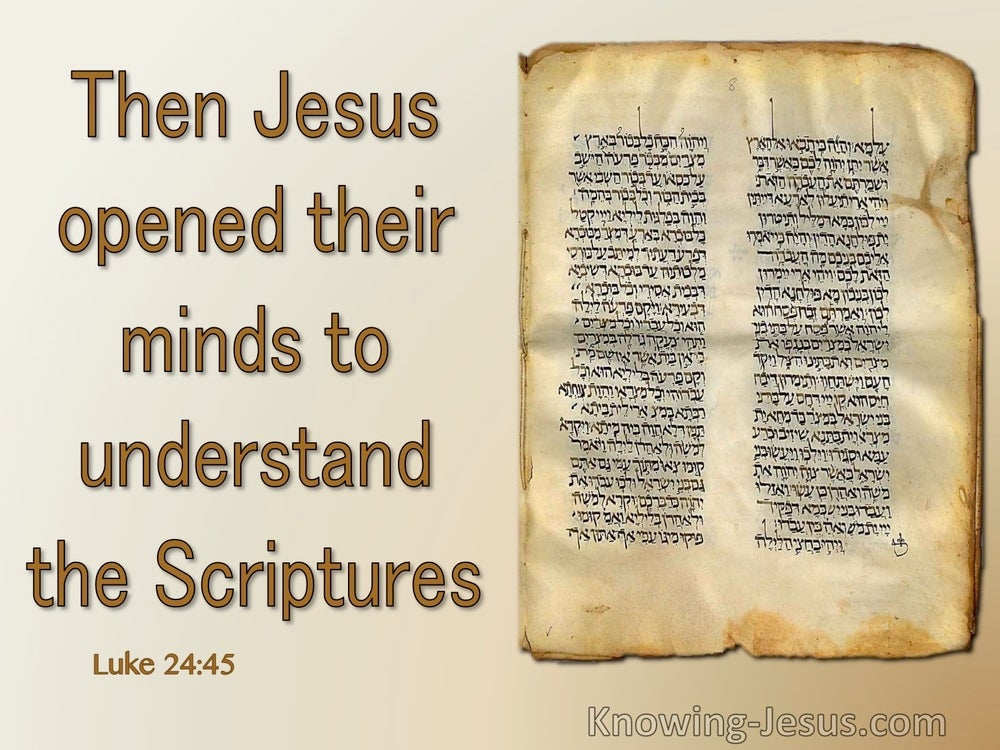 What an amazing Bible study those two disciples received from the Lord Jesus on the road to Emmaus that day, when He opened their hearts to understand the Scriptures - truths to which their minds had previously been blinded. It is possible that some of the passages to which the Lord referred were verses they themselves knew by heart, and most likely would have recognised from the weekly synagogue reading, they heard each Sabbath day in the local synagogue?

Jesus made reference to the Law, the Prophets, and the Psalms, and how their hearts burned within them as He opened to them the Scriptures concerning Himself. "O foolish men and slow of heart to believe in all that the prophets have spoken",  was Christ's gentle rebuke to these two disciples. "Did you not understand that Christ had to suffer these things in order to enter into His glory?" And then beginning with Moses and with all the prophets, Jesus explained to them ALL the things concerning Himself in ALL the Scriptures.

In the few hours Christ spoke with these guys, the Scriptures must have come alive to them and taken on a completely new complexion. They came to understand that the Messiah had to suffer and die and rise from the dead on the third day, if the plan of salvation, which God ordained in eternity past, was to accomplish its great work of man's reconciliation to God, the redemption of human-kind, the forgiveness of sins and life everlasting, for all who would believe on His name.

While the Lord Jesus walked on this earth, He was the One Who taught His disciples, but too often the eyes of their understanding were shrouded as to Who this Man from Nazareth truly was. The disciples had developed their own perception of what the Messiah would do. They admitted to Jesus that they were hoping that it was He, Who was going to redeem Israel. They failed to understand that in God's plan of salvation the cross had to come before the crown. Salvation of the soul through the forgiveness of sin had to precede Christ's kingdom rule of peace and prosperity.

The unsaved man does not understand the things of God because they are spiritually discerned and during His time on earth it was the Lord Jesus who opened up Old Testament Scriptures to those who believed. It was Jesus who provided His followers with an understanding heart, as He taught them the principles of the kingdom. Today, it is the Holy Spirit Who opens the minds of the believers to the things of God, and unlocks the meaning of Scriptures - just as Jesus promised His disciples, during His final days on earth. "But when the Comforter is come, Whom I will send unto you from the Father, even the Spirit of truth, which proceedeth from the Father - He shall testify of Me."

But just as He was about to return to the Father, leaving His disciples as His chosen witnesses on earth, Jesus Himself walked with them and started to open the eyes of their heart to Who He truly was. Jesus began to unfold the books of Moses, all the prophetic teachings, and the meaning of the psalms, to these two of His faithful followers... and the veil that shrouded the minds, of these travellers on the road to Emmaus, was lifted, as Christ Himself opened to them ALL the Scriptures concerning Himself. That MUST have been an astonishing Bible Study!

As we walk along the pathway of our life, we will not have the physical person of Jesus join us on our earthly walk, to open our understanding to the Scriptures - but we are no less privileged than these two disciples on the road to Emmaus, for He told us that it was better for all of us that He went to be with the Father, so that the indwelling Holy Spirit of truth would be sent to be our permanent Companion and daily Comforter - to be with us and abide in us, FOREVER.

Just as Jesus opened their minds to understand the Scripture so the Spirit of God will open our minds and guide us into all truth. He will open up the Scriptures to our understanding, as we walk with Him by the way; commune with Him in our homes; work alongside Him in the duties of the day, respond to His still small voice, and simply rest, moment by moment in His love.

Thank You, Father, for the gift of the indwelling Holy Spirit of Christ. I pray that You open up the Scriptures to my understanding more and more, so that I come to know You better with each passing day. This I pray in Jesus' name, AMEN. 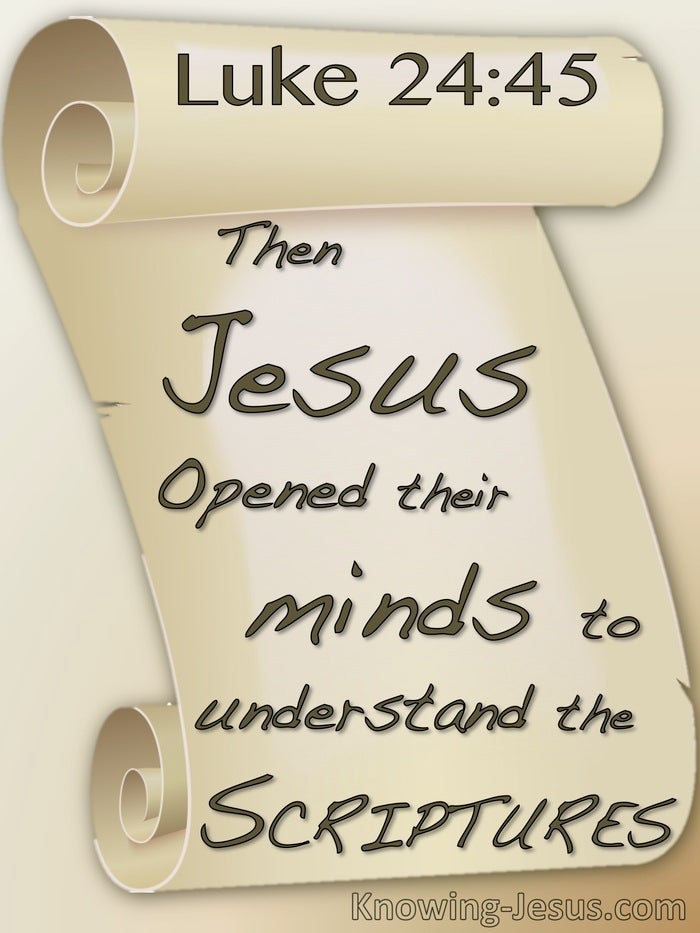 Choose a Verse from Luke 24