Enoch walked with God; and he was not, for God took him. 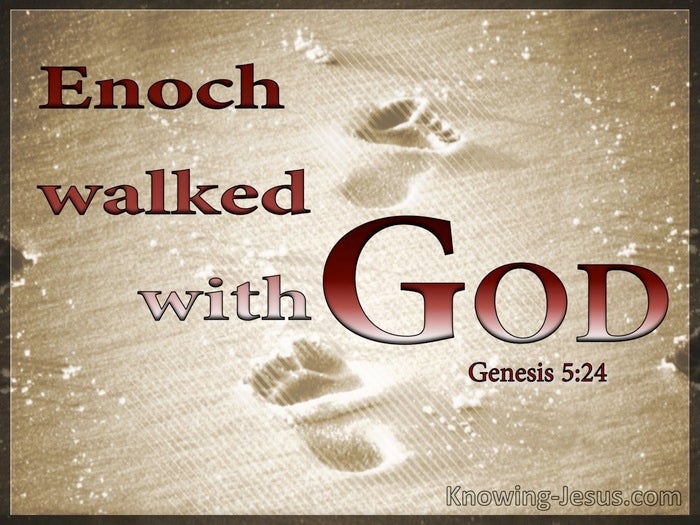 The man that walks with God is the one that lives in close, constant, and intimate intercourse with the Father, and Enoch was such a man of God. We are left in no doubt of his final moments on earth, for the writer to the Hebrews tells us that this godly man was translated to heaven when God took him. This man was raptured into God's presence, for, "Enoch walked with God; and he was not, for God took him."

Enoch was a man who walked by faith. He was one who walked in the light as our Father is in the light. He was a man who walked according to God's will and God's purpose - for as we read in Amos, "Can two walk together, except they be agreed?" Walking together in the unity of the spirit implies deep friendship and love - a special and intimate relationship, where ongoing communion is maintained.

We know that the period before the flood was a time when wickedness was multiplying, and the earth was corrupt to the core, but Enoch walked with God. He swam against the ungodly tide of wickedness that flooded the antediluvian world, which was a place of violence, ungodliness, and evil before the waters of judgment swept over the earth - but Enoch walked with God and kept on walking with Him.

Enoch became a man of faith at 65 years of age, and for the next 300 years, he communed with God. During those years, he maintained sweet fellowship with the Father and was pleasing to God. Yes, Enoch was a man of faith, for without faith it is impossible to please God. But he was also a man of prayer.

Enoch's communion with God gives us an example of the relationship God desires to have with each of His children. We should all walk in close, intimate fellowship with Him, all the days of our earthly life. Did Enoch sin during those 300 years when he walked with God? We are not told. But I am sure he did. But like us, if he confessed his sin, God was faithful and just to forgive him his sin and cleanse him from all unrighteousness - for God is the same yesterday, today, and forever.

Yes, Enoch both pleased God at the age of 65 when he was saved, and Enoch lived a life that pleased Him, as he maintained communion with the Lord for the next 300 years. This faithful man's earthly walk with God depicts the type of life that each child of God should seek to emulate. Like Enoch, we are to walk with God all our days - from the day when we were saved by faith, to the day He takes us to be with Himself - at the Rapture of the church, which will be ushered in at the resurrection of the dead in Christ.

We are to be SAVED by faith, and then we are to WALK by faith for the rest of our earthly life. Let us be faithful in prayer and let us be diligent to live a life of faith and to walk in spirit and truth with our heavenly Father. Having been born-again, let us live by faith all the days of our life, despite the multiplied evils that flood our present age, and let us keep on walking with Him, and maintaining sweet fellowship with our heavenly Father, until we too are taken to be with Him, into heavenly glory.

Thank You, Father, for the example of godly men who maintained a trusting, prayerful communion with You, like Enoch who trusted in You and walked by faith for the rest of his life. Thank You that You are the same, yesterday, today, and forever, and I pray that I may keep the eyes of my heart fixed on Jesus and that my daily walk may be pleasing to You. Help me to live as You would have me to live and to glorify my Father in heaven. In Jesus' name I pray, AMEN. 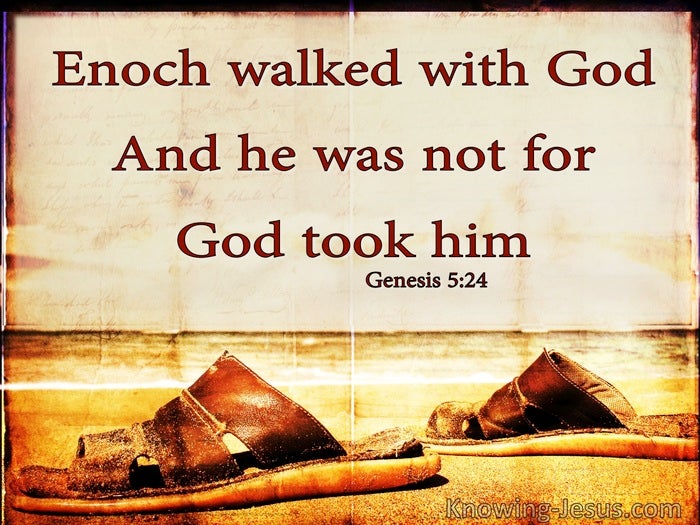 Choose a Verse from Genesis 5 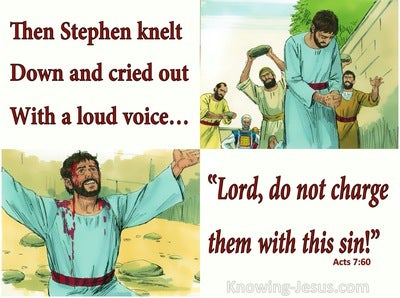