"For My yoke is easy and My burden is light." 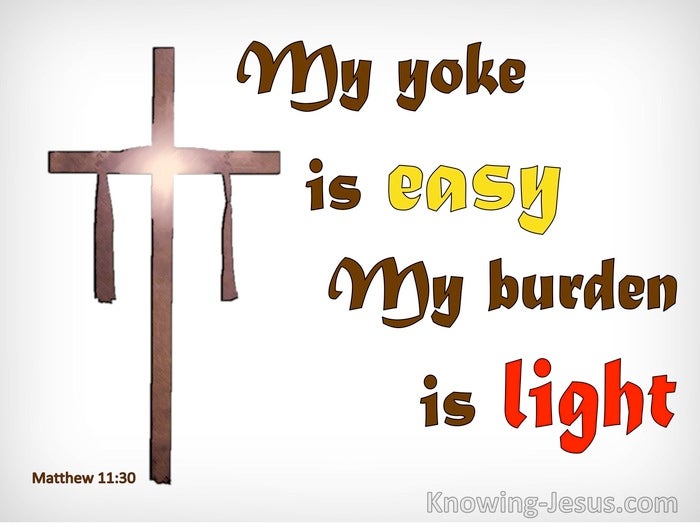 The opposition to Jesus Christ increased over the years, but the imprisonment of John the Baptist seemed to be a turning point in His ministry. "He who has ears to hear, let him hear", were words of warning that were spoken at this time... and soon the prophecy of Isaiah would be fulfilled, when Jesus started to teach His disciples in parables, "that having eyes they do not see and having ears they will not hear".

John had been sent to prepare the way of the Lord and Jesus had come to fulfil His role as Israel's Messiah-King. Old Testament scripture pointed toward this very moment, but violent men attacked the message and the messenger, and Jesus had to pronounce judgement on this unbelieving generation and denounce the cities that rejected the Word of the Lord.

This was indeed a turning point in His ministry. This was the time the religious leaders committed the unforgiveable sin against the Holy Spirit by denouncing Christ's miracles as works of Beelzebub. Jesus had only been sent to the lost sheep of the house of Israel, but this was the point in His ministry when He would start to turn His attention toward "the nation that would bring forth the fruit of righteousness".

This was the crossroad when Jesus knew Israel must be set aside for a season. This was the turning-point when He set His face as a flint towards Jerusalem and the cross. This was the watershed moment when the Lord Jesus started to prepare His disciples for the post-cross Church dispensation.

This was at this critical moment in Christ's ministry when Jesus offered the most beautiful prayer of thanksgiving to His Father - the Lord of heaven and earth. God had hidden the truth from wise, well-educated people and revealed them to babes. I am sure that Christ offered this glorious prayer of thanksgiving and praise audibly to start teaching his devoted followers, truths that would have to be more fully revealed later, for He continued - "All things have been entrusted to Me by My Father. No one knows the Son except the Father, and no one knows the Father except the Son and anyone to whom the Son desires to reveal Him".

Jesus was the incarnate Word. He was the life-giving Bread and the living Water. He was the Good Shepherd of the sheep and the only Door of the sheepfold. He was the True Vine Who was starting to prepare His branches to become fruitful after His departure. He was the Resurrection; the Way; the Truth and the Life.

And so Christ, our gentle, humble God and Saviour offers ALL of us who are weary to come to Him for rest. He urges all who are burdened with sin to take up His yoke and to learn of Him, "For My yoke is easy and My burden is light". What a striking contrast with the proud Pharisees who bound heavy burdens on the people!

To be yoked to Christ is the turning of our heart towards His heart. It is aligning our mind with the mind of Christ. He does not call us to bear the problems of life; carry the weight of the day and take on the distresses of the heart or the trials we face alone. He comes alongside to help and heal; to encourage and provide the sufficient grace we need for all life and godliness.

Let us harness our heart to our loving Saviour; take up our cross; die to self and live for Him. Only in Him can we find eternal consolation and a bright hope, for His yoke IS easy, His burden IS light and we WILL find eternal rest for our soul in Him.

Heavenly Father, thank You for Your word which guides me through life and directs me in the way I should go. Thank You for sending the Lord Jesus to be the Good Shepherd of the sheep and my guiding Light in this darkened world. I pray that I may daily take up my cross and follow Him. Help me harness my heart and life to Jesus each day, for his yoke is easy and His burden is light and in Him there is rest for my soul. Thank You that I have not been left to bear my problems and pain of life alone. Use me, I pray, to point others who are distressed and burdened with sin to YOU, and keep me low at the cross and broken before You for His name sake, AMEN. 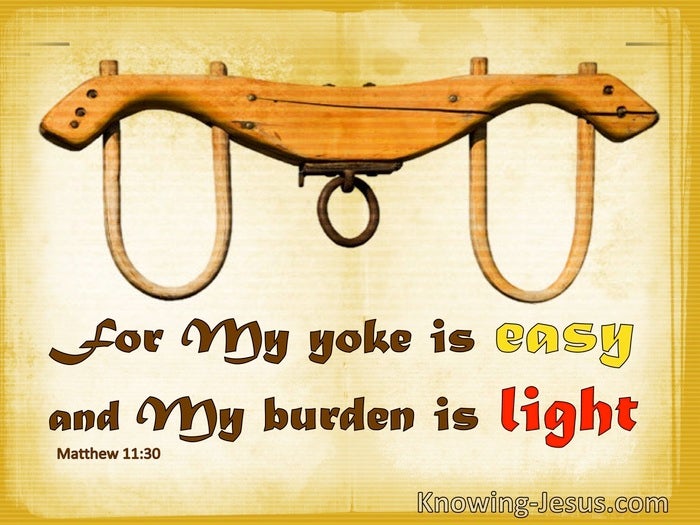 Choose a Verse from Matthew 11