"Whoever hits you on the cheek, offer him the other also; and whoever takes away your coat, do not withhold your shirt from him either. 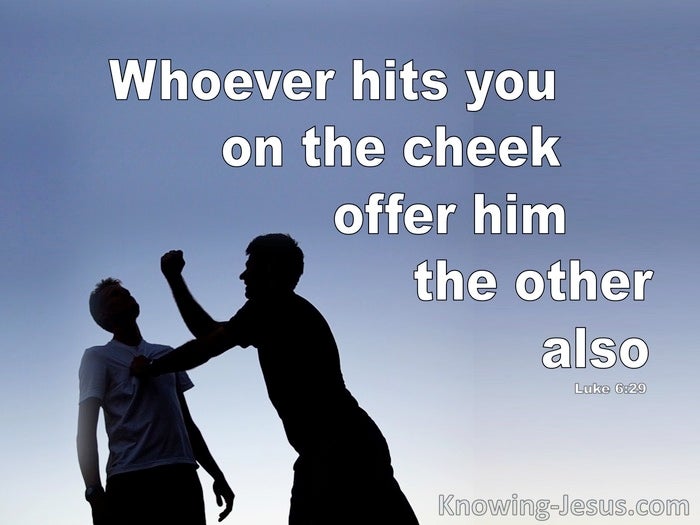 In Luke's gospel, we find the Lord giving a similar message to Matthew's sermon-on-the-mount. However, He delivers this teaching in the low-lands on the plain. Indeed, in this sermon-on-the-plateau, Jesus is not only speaking to His disciples, but also to the disinterested multitudes, and hypocritical Pharisees, that only followed Him for physical healing, self-help or destructive criticism.

Christ's discourse, is a stern message to anyone who would become His disciple, for everyone who would be Christ's disciple must deny himself, take up his cross daily, and follow the Lord Jesus. Christ's message was not for false followers or for those that only followed Him for selfish motives. It was not a message for those that were simply bothered by the things of the world. Christ's message was a teaching those who sincerely desired to know and understand the things of God.

We discover four blessings in this passage, which can be received by those who are credited with righteousness. These four blessings stand in stark contrast with three bitter woes, that are the just desserts.. of those that refuse to accept Christ's offer of salvation. Though believers may face poverty, hunger, weeping and rejection, Jesus qualifies this - for the poor in spirit, who recognise their need of Christ are blessed, and will have a part in His kingdom. Likewise, those that hunger after the Lord, weep for their sin and suffer for righteousness sake.

The three woes that follow are for those that want their best life now.. at the expense of their eternal salvation. They may be rich in worldly goods, well-fed, famous and popular, but if they reject Christ's offer of salvation, by grace through faith in Him.. they are men most miserable - for they are eternally cursed and excluded from His eternal kingdom.

In the passage under consideration, the Lord explains that true righteousness is revealed by love - the love of Christ in-filling us.. and then overflowing into the lives of others, whom may meet. Love your enemies. Do good to those that hate you; bless those who curse you and pray for those who mistreat you, we are instructed. Do not retaliate., but give generously and treat others in the way that you would want to be treated yourself, were the superlative words of our Saviour - which are so contrary to the ways of the world.

In this verse, Christ taught: if anyone hits you on the cheek, offer him the other cheek as well; and if anyone takes away your coat, do not withhold your shirt from him, but give him that as well. Retaliation, vengeance, judgement, condemnation, unkindness and unforgiveness are too often the way of the world, but Christ taught a totally different set of standards - based on His own godly character.

Though God is a God of justice and must punish all sin.. nevertheless, He is a God of love and mercy, kindness and compassion, long-suffering and of great goodness - and, as His children, we are instructed to display the same godly qualities and merciful attitude that He has shown to each one of us, who has been saved by grace through faith in Him.

Let us never forget that mercy leads to mercy, and pardon will lead to pardon.. while judgement results in judgement and the one that condemns will themselves be condemned - not only in this life but in the one to come.

It was Jesus who instructed: whoever hits you on the cheek, offer him the other cheek also; and whoever takes away your coat, do not withhold your shirt from him either. He did not simply say it with His lips.. the Lord Jesus lived it throughout His earthly life, as an example of how we should live, in this crooked and perverse world - for Jesus humbled Himself by becoming obedient to the point of death - even death on a cross. Let us receive Christ's message with all sincerity and truth.. deny self, take up our cross and follow Him

Heavenly Father, the world is becoming more violent, and the love of many has grown stone-cold, and it is often a temptation to judge, condemn and retaliate against those that hurt, or harm us - or cause pain to those we love. Give me the grace to live as Christ lived and to love others as He loved. Help me to put this verse into action, in my everyday life, and to take up my cross and follow You - to Your praise and glory, in Jesus name I pray, AMEN. 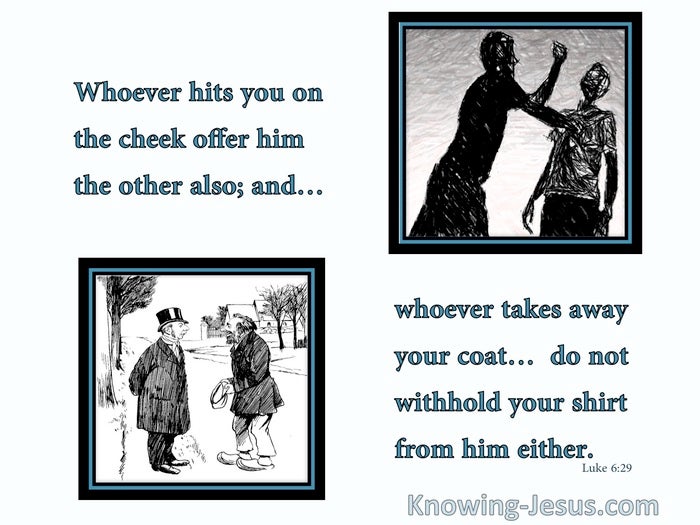 Choose a Verse from Luke 6 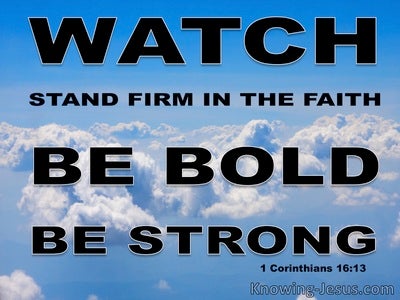