"Nevertheless do not rejoice in this, that the spirits are subject to you, but rejoice that your names are recorded in heaven." 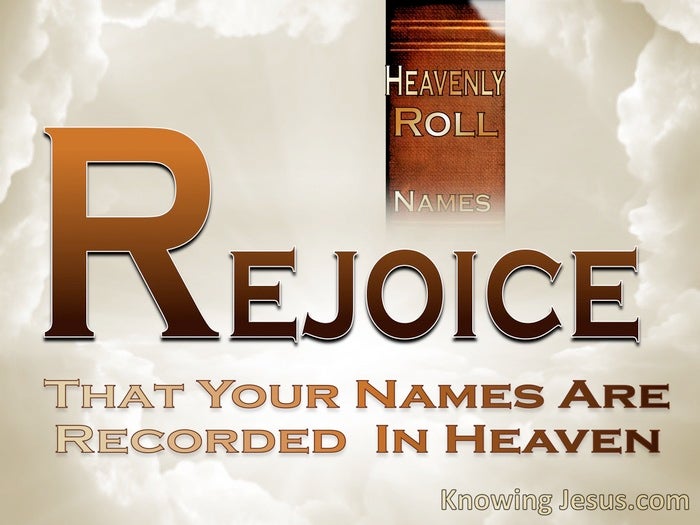 As the Lord Jesus Christ continued His journey towards Jerusalem and the cross, we discover an increasing opposition to His Messianic claims. As the day for His departure drew ever closer, we find Jesus preparing men for a ministry, that would shortly be handed over to them. After His death, burial and resurrection, these men were to become members of His Body on earth - through whom the gospel of God would be taught to the far corners of the earth.

Earlier in His ministry Christ had sent out His twelve, chosen disciples on a ministry mission, in northern Israel. Now, however... He temporarily, commissions an extra seventy followers, and endows them with the same authority, over sickness and Satan.. that He gave earlier to His chosen apostles. The 70 were commissioned to minster to people in the more hostile, southern region of Israel. This selected group were given the task of going ahead of Jesus, to prepare the way of the Lord, as He set out on His final visit to the city He loved - and to face an increasingly hostile population.

Although the ministry of the 70 was a unique, pre-cross commission, there are many aspects of their ministry that are relevant for the Body of Christ today, as we.. like them, are sent out into the world, to continue to share the gospel of Christ, with whomsoever we meet.

They were sent out, two-by-two, as lambs among wolves. Like them, we not only live in a world that is increasingly hostile towards Christ and His people, but we are directed to work together, in unity. These men were not sent as 'lone-ranger' witnesses, for we are members of one Body.. who need the support of our brothers and sisters in Christ, and should be united together in love - in this increasingly God-hating, Christ-rejecting, sinful world.

Their instruction... not to carry money and make provision for their ministry, does not suggest irresponsibility, but demands a determined trust in God's provision, Who has promised to supply all our needs according to His riches in glory. By instructing them, not to greet anyone along the way, does not suggest that God condones rudeness, but rather.. it encourages an urgency in the mission set before us.. which should not be delayed by long, ceremonial greetings or unimportant gossip.

God is no respecter of persons and Christ's directive, to remain as guest in the same house, without flitting to another residence, because of person preference, displays the godly characteristics that are expected of all God's children. And no matter what thrilling results we witness in our ministry for Christ.. and no matter what excitement we experience along the way - nothing should overshadow the wonderful truth.. that we are covered by the blood of the Lamb - and that our names are written in heaven.

It must have been quite an honour to have been chosen to become one of the 12, or one of the 70, and to be endowed with the responsibility, power and authority, that Christ gave to these disciples. But He was quick to point out that their joy should not be focused on the gifts, abilities, honour and acclaim, that God had graciously bestowed on them - but rather, that they should rejoice, that their names were written in the Book of Life.

It is not the gifts and abilities we have received from the Father, that should have our rapt attention. The predominant source of our joy should be the close, personal relationship we enjoy with our heavenly Father. No matter what position we are given in this world.. and irrespective of the gifts and graces we have received from above, our everlasting joy should be in the fact that we have been saved by grace, through faith - and have an inheritance, that is kept for us, in heaven.

Praise God, that in Christ.. our sins have been forgiven and eternal life is our present possession. And although we should delight to praise God for the many blessings we receive from Him, day by day.. let us rejoice.. in heart, soul, mind and strength.. that our names are written in heaven. 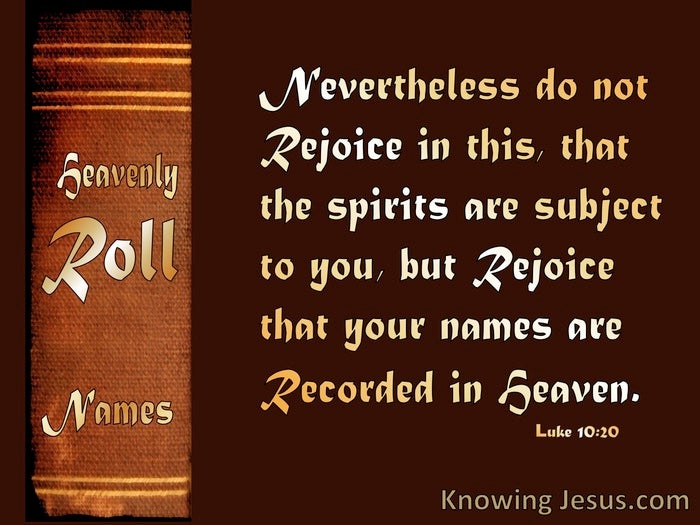 Choose a Verse from Luke 10