because God had provided something better for us, so that apart from us they would not be made perfect. 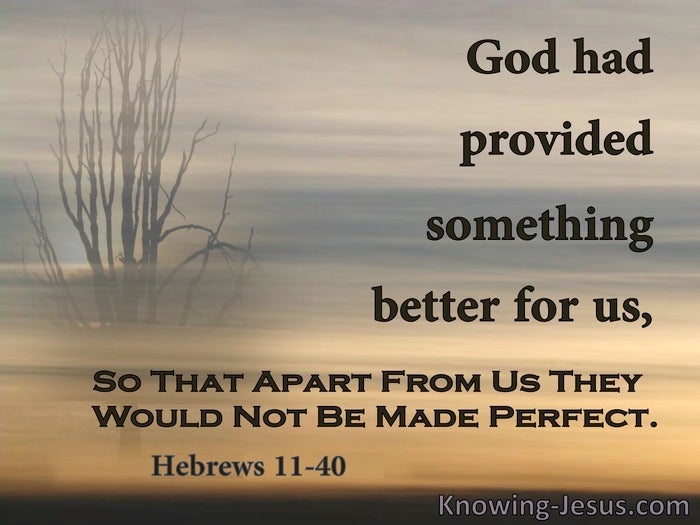 The urgent message of Hebrews is that Christians, and particularly Jewish believers, should not return to the religiosity and legalistic practices of  the Mosaic Law and pre-cross Israel - for we are not under the Law but under grace. Today we live in "the dispensation of the grace of God".

Many Jews readily responded to the glorious gospel of Christ, in those early days of Christendom, but many found it difficult to break free of the religious rites and legal requirements that bound them to the curse of the Law. Hebrews is a wonderful instrument, used by God, to open men's understanding to God's perfect plan of redemption, which He purposed in His heart before the foundation of the world. It is a book that lays emphasis on the insurmountable superiority of Christ over ALL.

The writer of Hebrews, systematically laid out Christ's superiority to prophets, priests, kings and angels. He details His preeminence over leaders like Moses, Aaron, Joshua and David. He demonstrated His superior priesthood and the sacrifice of Himself as greater than Old Testament offerings. He urged them not to fall into unbelief and faithlessness, like Israel's forefathers and warned against spiritual immaturity.

The author of Hebrews called them, and us, to consider the Person and Work of Jesus and warned against neglecting the gospel of grace; hardening our heart; reverting to spiritual infancy; falling away from the truth or treating the wonderful birthright we have in Christ, with disdain.

It is at the very end of the most glorious chapter on 'faith' that the writer explains to his readers why his long list of men and women of faith did not receive the promises God made them... "God has provided something better for us, so that apart from us - they would not be made perfect".

However wonderful the promises He gave to Israel, God planned to give us - and them, something even better. The promises of the New Covenant, (which was cut at Calvary) with its victory over sin and death; the indwelling Holy Spirit and all the privileges that come with our great salvation was secured at the cross. This not only enabled God's earthly land and kingdom promise to be brought to fruition at the right time - but for 2000 years the Christian Church, has been engaged in an ongoing spiritual battle, which - 'though won at the cross will be fulfilled at His return.

By His goodness and grace God purposed to use the Church as the instrument to secure better promises for Israel (heavenly, as well as earthly promises) - just as He used Israel as His instrument to bring the glorious gospel of redemption through their Jewish Messiah to the Gentiles.

Heavenly Father, Your plan of salvation for Jewish saints and Gentile believers is most wonderful and we thank You that Christ's sacrifice of Himself on the cross of Calvary, has enabled men and women of faith - both Old and New Testament saints, to be justified by faith and receive the forgiveness of sin and life everlasting. Thank You that for all who have trusted Your word - both pre and post-cross believers, You have provided something even better... so that apart from one another, neither Jewish or Gentile believers would not be made perfect. Thank You for the great cloud of witnesses, who have run with perseverance the race that was set before them. Help me to pay heed to the warnings in Hebrews, so I may grow in grace and receive the crown of life, which is promised to all Who love YOU - this I ask in Jesus' name, AMEN. 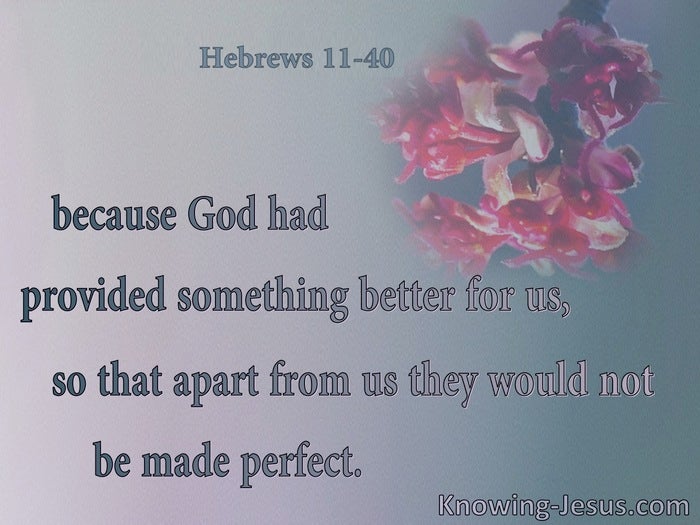 Choose a Verse from Hebrews 11