Jesus Christ is the same yesterday and today and forever. 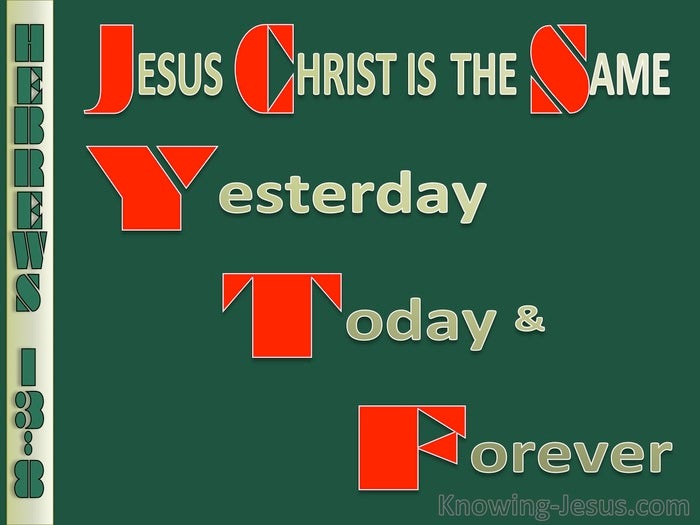 "All Scripture is inspired by God and is profitable for teaching, for reproof, for correction and for training in righteousness," and Jesus came as the fulfilment of God's written Word. Quoting from the Psalms, He Himself declared, "Behold, the volume of the book is written about Me - and I have come to fulfil your will, O God."

The Jewish leaders searched through Scripture, thinking the letter of the Law contained the words of eternal life, but Jesus had to tell them, "all Scripture bears witness of Me!" The Law, the Prophets, and Psalms, all point to Jesus Who came, at God's appointed time, to fulfil all righteousness.

The two on the road to Emmaus, found their hearts burning within their breast as the resurrected Christ explained the Scriptures... and He reminded those in the upper room that everything about Him had been foretold in the law of Moses, the prophetic writings, and the book of Psalms.

In the beginning, God spoke the world into being from nothing... and in the beginning was the Word... Who was with God and was very God of very God. That living Word of God is Jesus Christ, the righteous Man born of a woman. Jesus of Nazareth is the incarnate Word, the Son of God Who was given to redeem the world.

Before Abraham was Jesus could claim I AM... but in these last days, God has spoken in a unique and special way. He has spoken to us through His Son, our Saviour Jesus Christ. The eternal Son, Who was from eternity past, is without beginning and ending. He is eternally the Almighty God, Who chose to be born into the world He created - to save His people from their sin.

He is the eternally existent God Who is the same yesterday, for He is beyond time, space and matter. And in the eternal ages to come He is still the same... and the redemptive power of His sacrificial blood will remain efficacious for all - forever.

He is the ever-present immutable God today, Who remains the same through all our 'today's - for He chose the cup of suffering, pain, and death so that we might be made whole, be healed, and have life eternal. He learned obedience by the things that He suffered and committed Himself into the hand of His God, so that death could be swallowed up in victory for all who trust in Him.

He lived and died so that we might die to self and live for Him and He is seated on the right hand of the Majesty on high, continually interceding as the King-Priest of heaven for US - the Church He loves, for the glory of God the Father.

This is a glorious statement of fact and a profound promise that keeps our souls eternally secure in the God of our salvation. His never changing character, His all-sufficient wisdom, and His free gift of grace to all who trust in Christ, gives stability to the soul and rest to the heart.

The unchangeable nature of our Saviour, Jesus Christ, is an all-embracing assurance that His Word is faithful, His promises are true, His saving grace is free to all who trust in Him for salvation, and none of the many precious promises contained in the Word of God can ever fail.

The unchangeable God has spoken of His unchangeable Son Who is the SAME - yesterday, today, tomorrow, and throughout the eternity of eternities. His love is unconditional, His grace is everlasting, and His truth endures from one generation to another.

Thank You, Father, that Jesus is the same yesterday, today, and forever. Thank You that Your goodness and grace towards me is unchanging and unchangeable. Thank You for the many precious promises contained in the Word of God and for the blessed hope, for which we look - the glorious appearing of our great God and Saviour, the Lord Jesus Christ, AMEN. 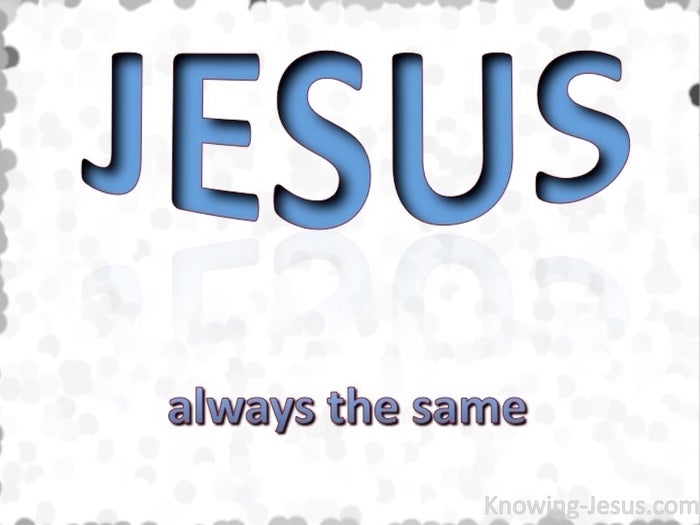 Choose a Verse from Hebrews 13