And you were dead in your trespasses and sins, 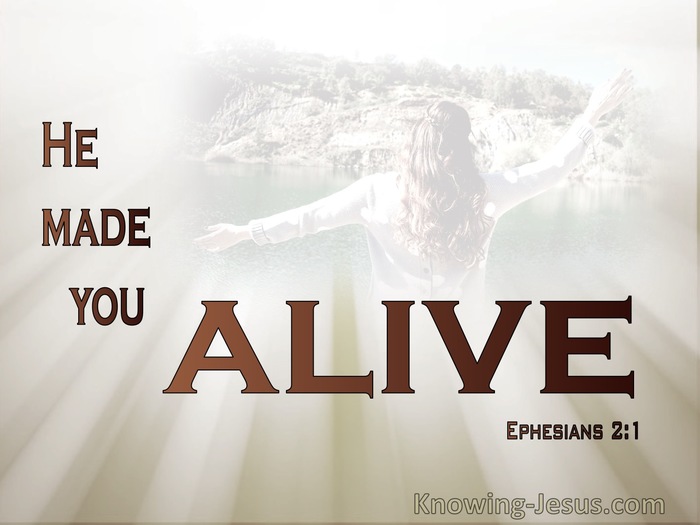 The living-spirit and life-soul of Adam was breathed into his lifeless, dusty frame by the life-breath of the eternal Holy Spirit. But the spirit of Adam died the moment he sinned. From that time forward, every member of the human race comes into this world as a fallen creature, estranged from their Creator - a pro-created being, who from conception is spiritually dead.

From the 'fall' of Adam in the paradise of God, every man born of woman and every woman procreated by man is birthed into this fallen world, dead in trespasses and sins, depraved in heart and mind and at enmity with their Creator. Paul's opening statement in Ephesians 2 says bluntly, "And you were dead in your trespasses and sins." Before being justified by faith every Christian is an unbeliever. Before salvation, every man is under the eternal condemnation of God.

Paul had just finished outlining the incredible privileges that are ours in Christ. He spoke of the spiritual blessings, in heavenly places that are ours in Him. He reassured us that we were chosen in Christ before the foundation of the world. He encouraged us to be holy and blameless before Him - in love. He reminded us that we were predestined to be adopted as sons through Jesus Christ and that we have received redemption through His blood. The wonderful truth is... that we are forgiven of our sins, according to the riches of His grace - which has been lavished on us in all wisdom and understanding.

He told us that we have obtained an inheritance, having been predestined according to God's eternal purpose and will, and related glorious truths and that we were sealed in Christ with the Holy Spirit of promise, Who has been given to us as a pledge and guarantee of our eternal inheritance.

It is only when new-life is breathed into the lifeless spirit of a man, at the point of salvation, that the eternal barrier between God and man, which was erected at the fall, is removed. It is only at the point of the 'new-birth', when the Holy Spirit of Life breathes the resurrected life of Christ into a sinner.. saved by grace through faith, that the human spirit is revived and spiritual death is changed into spiritual life.

Without the new-life of Christ being breathed into the one that is dead in their sins, the entire life of that man is lived out with no capacity for spiritual things. Until we are born into the new creation-in-Christ, we are estranged from God, under His eternal condemnation and bound for the fires of hell.

Sin was the cause of man's downfall and spiritual death the result. Sin was the root of our spiritual ruin, and separation from God is the bitter fruit of a man's disobedience. Sin was the cause... and the result is a race of men born spiritually dead in trespasses and sins, without hope and without God. BUT God made Him who knew no sin to be sin on our behalf, so that we might become the righteousness of God in Him. Praise His holy name.

The significance of this truth is astounding. All of us were operating as children of disobedience BUT every converted sinner becomes a heavenly saint and a child of God, for you who were dead in trespasses and sins, have been made alive in Christ Jesus our Lord.

Every believer is delivered from the wrath to come by faith, and everyone who believes in Christ receives the remission of sins. His perfect righteousness becomes our outer garment. It is grace that has brought about this truly amazing transformation and it is grace that has provided God's wonderfully free and undeserved favour. It is God's amazing grace that made us alive in Christ and by grace alone, through faith alone in Christ alone we are set free from condemnation and eternal separation from our Creator.

This change is not accomplished by the Law or the keeping of rules, but by God's pardoning grace. This metamorphosis has nothing to do with good works of the flesh, but by God's justifying grace. This grace of God is so abounding and precious that there are neither words to describe nor songs sufficient to sing of His amazing love and the gracious gift that has been poured into our hearts, through the finished work of our Saviour, Jesus Christ our Lord. Praise His holy name - Hallelujah! - Amen.

I praise Your wonderful grace that made me alive in Christ, when I was dead in trespasses and sins, and without hope in the world. Thank You Father for Jesus and thank You for loving me so much that You sent Him to give me new life through faith in Him. I pray that Your Spirit will more and more open my understanding to this indescribable gift that is mine. Make me bold in proclaiming the saving blood of Jesus to those that are born dead in their sins, and use me in the furtherance of Your plans and purposes. This I ask in Jesus' name I pray, AMEN. 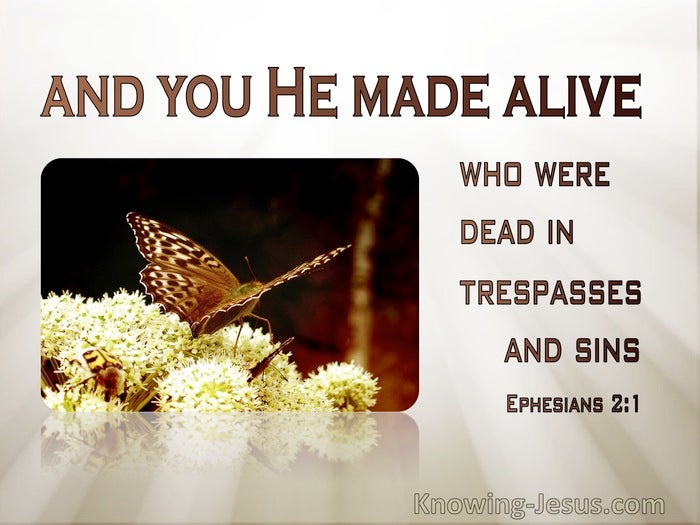 Choose a Verse from Ephesians 2 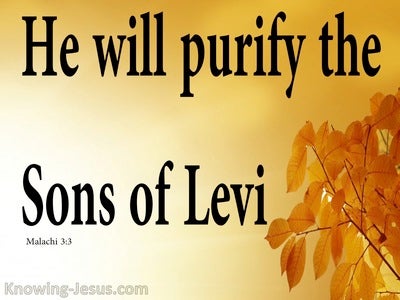 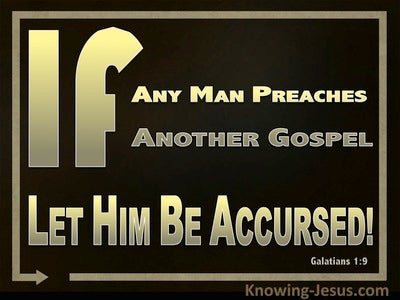 The Key To God’s Work