But we know that the Law is good, if one uses it lawfully, 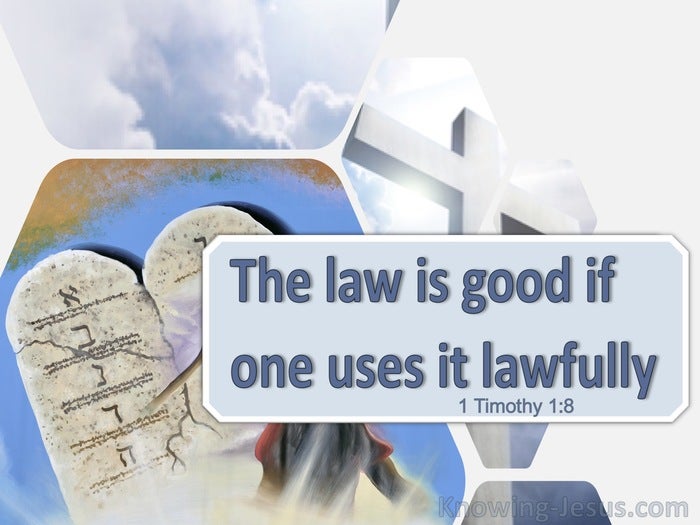 It must have been encouraging for Paul to see Timothy, his young 'son-in-the-faith' being sufficiently established in his Christian life to be entrusted with pastoring the recently established Church in Ephesus. In this first epistle to Timothy, Paul balances the encouragement and edification he gives, with some necessary warnings about teachers of the Law, who have deviated from the truth, while setting him the task to correct any erroneous doctrine.

Paul wanted Timothy to know the insidious nature of ignorant men, who substituted the truth of the gospel of God for their fruitless discussions, and perverted teaching on God's Law. The Law of God is good. Indeed, the Law, given to Israel through Moses, was perfect. However, Paul knew it was needful to remind Timothy of the reason the Law was given, and the danger of teaching a deviant doctrine. "We know that the law is good," Paul wrote,  "provided one uses it legitimately."

Sadly, there were false teachers who were not using the Law legitimately. They had missed the whole purpose of the Law and were undermining the true gospel of God. They were leading people astray with their incorrect understanding. "We know that the Law is not meant for a righteous person," Paul wrote, "God's Law is for the lawless and rebellious, for the ungodly and sinful, for the unholy and irreverent, for those who kill their fathers and mothers, for murderers... for the sexually immoral and homosexuals, for kidnappers, liars, perjurers, and for whatever else is contrary to the sound teaching."

Illegitimate use of the Law is contrary to the pure gospel of Grace that Paul taught, and he was anxious to ensure that Timothy would not be influenced by this teaching. Paul wanted him to recognise how dangerous it was... to both the unsaved sinner and those that were already born-again.

Timothy, the son of a Gentile mother and Jewish father, had already been taught the real purpose of the Law from Paul. He knew the Law was designed to identify one's sin. It was to show people that they are ALL fallen sinners. They are ALL in need of a Saviour. It was to teach that the perfect standard God desires from man, is unattainable by man's own effort.

It was to reinforce the teaching, in Old Testament times, that man is justified by faith and not by works of the Law. It was to remind them that the justified man is to live by faith. It was to help sinful man understand his need of salvation. It was to encourage sinners to turn from their sin and turn to God for the forgiveness of sin - which only comes through faith in Christ - God's perfect sacrifice for sin.

When the Law is correctly understood it is good, for it brings lost sinners to salvation in Christ. But when it is misapplied, misappropriated, and misunderstood, it is being used unlawfully... causing sinners to strive to do good works in their own strength, by attempting to keep the righteous requirements of the Law... in the hope that God will forgive them because of their good works and meritorious acts. But this is NOT what Scripture teaches.

It promotes a false sense of security, by encouraging an attitude of self-righteousness. It fosters the mindset of a proud Pharisee - I am so good because I didn't do that, but did do this.. and God will be pleased with my efforts and award me a place in heaven! - is the honey-coated lie, around the sharp sting of sin. But this can never be.. for Salvation comes through faith in Christ Jesus... the one and ONLY sacrifice for sin... the one and ONLY Mediator between God and man.

Timothy would have known about Paul's concern for the Galatian Christians, who had been taught, by false teachers, that they needed to be circumcised to be saved, and that they had to continue keeping the Law, so they did not lose their salvation! GOD FORBID! was Paul's emphatic outburst to these believers, when he was correcting their foolish attempts to be saved by works and to live by works. "You foolish Galatians," he spluttered, "who has bewitched you with this erroneous doctrine!"

The Galatians had to be retaught and Timothy had to be reminded that the Law is a schoolmaster that brings us to Christ...and that any attempt to keep the Law through works of the flesh will NEVER be accepted by God. When the Law is used lawfully it points people to Christ - BELIEVE on the Lord Jesus Christ. When the Law is used unlawfully it causes man to try to save himself by works. Believe on the Lord Jesus Christ AND.....

The Law is still good IF one uses it lawfully. But today, as in the days of Paul and Timothy, there are many that teach a different gospel, which ADDs to the work Christ did on the Cross. Adding works to Christ's finished Work of salvation, will NEVER be accepted by God. 'Believe AND be baptised'. 'Believe AND give money'.  'Believe AND evangelise'. 'Believe AND do good works' 'Believe AND attend church, AND go to confession, AND say the rosary...............' And so on...

When the question, "what must I do to be saved?...." is asked, and the word "AND" becomes part of the answer.. Believe on the Lord Jesus Christ AND... BEWARE! When any 'work of the flesh' is being added to Christ's finished work on the Cross, it is using the Law unlawfully. 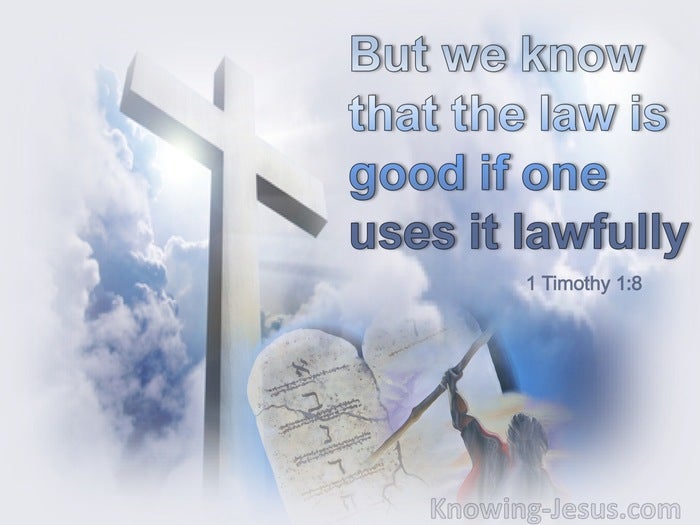 Choose a Verse from 1 Timothy 1