Jesus said to them, "I am the bread of life; he who comes to Me will not hunger, and he who believes in Me will never thirst. 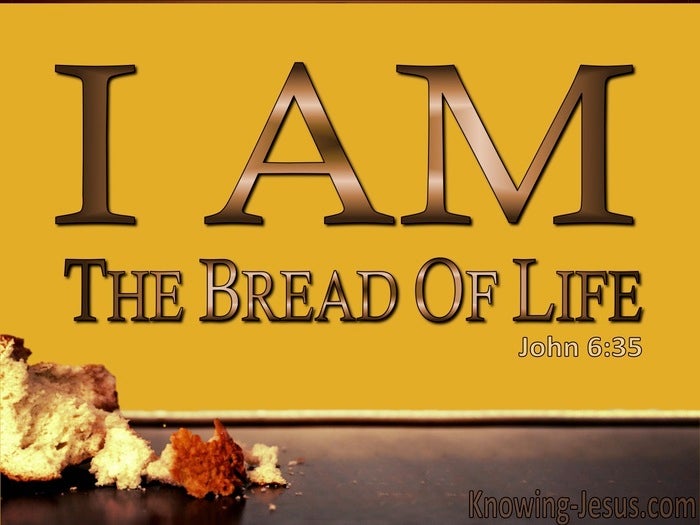 During his earthly ministry, Christ taught the multitudes that He was the promised Messiah. He authenticated His claims through many signs and wonders, such as the feeding of the 5000. The supply of bread and fish satisfied the crowd's physical hunger and excited their carnal cravings, but they neglected to understand the deeper meaning of this miracle of Jesus.

Knowing that the Lord had crossed to the other side of the Galilee caused the people to pursue after Him, in the hopes that they would get more free food! But Jesus knew that they were following Him for the wrong reason. They were not seeking Him because they understood the sign, but because they ate of the loaves and were filled. They were not following Him because their soul was hungry for forgiveness, but to satisfy their physical appetite.

Jesus warned them not to work for the bodily food which perishes, but for the food which endures to eternal life... which He alone could give them... He was the One on Whom the Father set His seal. It was not being fed on bread and fish that these lost souls needed, but feeding on the Bread of Life from heaven - feeding on Christ, the Son of Man, in Whom is life eternal.

It must have saddened His heart when Jesus saw their proud, unbelieving attitude, especially when they asked Him to show them a sign that He was the Messiah as He claimed. They argued that their forefathers had eaten heavenly manna for 40 years, so by comparison Jesus had only done one paltry little miracle with earthly food, not daily manna from heaven!

They wanted Jesus to carry out a similar spectacle to Moses, as proof of His Messianic claims."Give us this bread from heaven," they demanded. "Give us that manna from above." They clamoured for physical food but refused to acknowledge the astonishing truth He revealed to them. "I Am the Bread of Life," He said. "I am the Bread that you are seeking. He who comes to Me will not hunger, and he who believes in Me will never thirst." Jesus offered Himself to the people of Israel, but they turned Him down.

Jesus announced the most earth-shattering truth to these people and they misunderstood, through unbelief. He did not say he HAD the bread of life but He WAS the Bread of Life. In Him was eternal life and the one who comes to Him will never hunger nor thirst. Christ could satisfy their spiritual hunger and spiritual thirst because He is the Living Water and the Bread of Life from heaven... and these people missed it.

This was the first of seven claims Jesus made about being the Bread of Life from heaven. He told them that He is not only the Giver but the Sustainer of our lives. He becomes our living nourishment, day by day, strengthening and sustaining us, in and through His everlasting, life-giving power. Not only does Christ give us each day our daily bread, but He also imparts to us His life-giving Spirit, which is life everlasting.

This was the first of seven titles that Christ used about Himself that started with the sentence, "I AM.." I AM the Bread of Life which will satisfy and sustain you through time and into eternity. I AM the Light of the World to dispel the darkness of sin and death. I AM the Gate - the Entrance Door into security and means of fellowship with almighty God. I AM the Good Shepherd, to lead and guide, to feed and protect.

All are invited to feast at the banqueting table... to feed on Christ our Living Bread, Who came down from heaven from the Father of mercies. And all who feast upon the Lord are promised the eternal benefits of this life-sustaining heavenly Manna - that true Bread Who satisfies the hungry heart with all good things.

Every word uttered by our dear Lord Jesus is spirit and life to all who come to Him as Saviour. All those who feed on Christ will live forever, for Jesus said to those who followed Him, "truly I tell you, unless you eat the flesh of the Son of Man and drink his blood, you have no life in you."

May we daily feed on the Bread of Life, by faith with thanksgiving as we journey through life, for He alone is our life-sustainer for in Him are the words of eternal life.

Loving Father, Your Word is food for my soul and refreshment for my hungry heart. Thank You for sending Your precious Son into the world to be the Bread that came down from heaven to feed our hungry soul and give life to those that are dead in their sin. Thank You for the Person and work of my Lord and Saviour Jesus Christ. Keep me from carnal desires, establish my heart, and strengthen me with His Life, day by day. In His name I pray, AMEN. 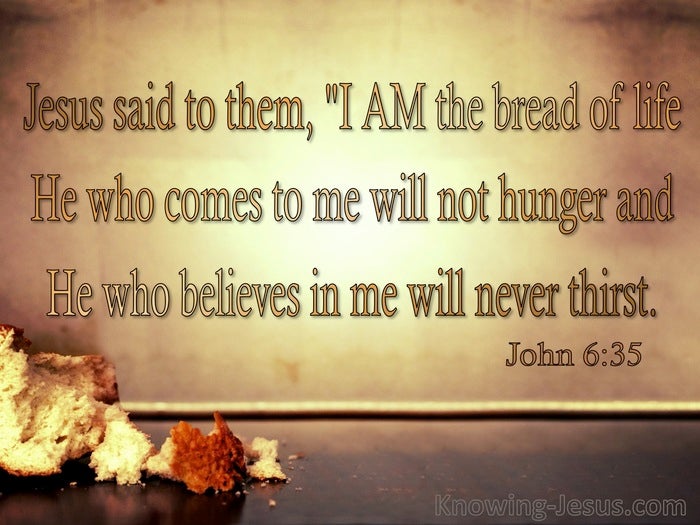