how much more will the blood of Christ, who through the eternal Spirit offered Himself without blemish to God, cleanse your conscience from dead works to serve the living God? 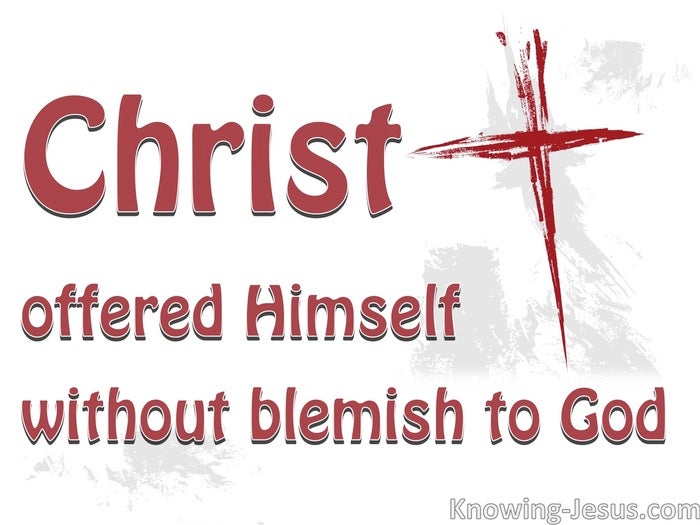 From the beginning of the book of Hebrews, the Lord Jesus Christ is elevated above every prophet of God and all angelic beings. He is of greater importance than Moses the Law-giver, and Joshua, who led the children of Israel into the promised land. The Lord Jesus is far higher in rank and authority than Aaron the first high priest of Israel, and His ministry eclipses the Levitical priesthood.

And here in chapter 9, we read that Christ's offering of Himself is far superior to the Old Testament sacrifices, and cannot be compared with the ashes of a red heifer, or the blood of bulls and goats, which.. for a season, covered the sins of the nation, or which removed them temporarily from defilement - until that day when the perfect Lamb of God would come to earth, and take away the sin of the world.

In former times, an annual atonement was made for the sin of the nation, where the blood of animals covered the sin of the people for a single year.  And yet through the sacrifice of His life, Christ Jesus obtained eternal redemption, the forgiveness of sins, and life everlasting for all who would believe in Him.

In the book of Numbers, we discover WHY the ashes of a red heifer were highly prized. They were used to remove a person's defilement, if they came in contact with a dead body. The young animal was slaughtered outside the camp, and its blood was sprinkled seven times in front of the tabernacle. Only then was the body of the red heifer burned to ashes.

The ashes were ceremoniously gathered up and carefully stored for multiple future cleansings. Only a tiny quantity of ash was required each time to cleanse the defiled Israelite, and the cherished cinders could last for many decades. Indeed, some sources say that only six such red heifers were required, during Israel's entire, pre-Cross history.

However, the extra-special cleansing effect of these special ashes, and the value that was placed upon them, cannot be compared with the efficacy of Christ's atoning blood, for we read, "if the blood of bulls and of goats, and the ashes of a heifer, sprinkling the unclean, sanctifieth to the purifying of the flesh - how much more will the blood of Christ, who through the eternal Spirit offered Himself without blemish to God, cleanse your conscience from dead works, to serve the living God?"

Christ's offering of Himself was through the eternal Spirit. He willingly offered His life as the full ransom price for the sin of the world, through the power of the indwelling Holy Spirit of God. In former times the animals, which were a type of Christ, had to be without physical imperfection - but for our sake, Christ lived and died without any moral blemish, for the glory of God and for our permanent and eternal salvation.

Our sins are not merely covered for a season nor are we only cleansed outwardly through His blood. We are cleansed inwardly and we are cleansed forever. Our hearts are made new. Our consciences are cleansed and purified by the shed blood of the perfect Lamb of God, and we are covered in Christ's righteousness, forever.

By faith, we are freed from slavery to sin, and delivered from a nagging need to carry out 'dead works' of the flesh, in an attempt to justify ourselves, cover our own confusion, cleanse ourselves from our own unrighteousness, and appease our sin-offended God. Rather, we are enabled to work the works of righteousness and do the good works of the spirit through the power of the Holy Spirit - good works which God Himself has prepared for all who have trusted Christ for the salvation of their soul.

May we never ever minimise the incredible sacrifice that Jesus made on our account, and the tremendous power that the blood of Christ has in the lives of all who trust in His redemptive work.

May we never diminish the inconceivable sacrifice the Lord Jesus gave, when He left His home in glory, made Himself a little lower than the angels on our account, and clothed Himself in mortal flesh, so that by the willing sacrifice of His sinless life.. we sinners might be declared righteous, in God's sight.

Heavenly Father, what an incredible sacrifice, that through the blood of Christ, my salvation has been made secure. Thank You for sending Jesus to be the sin-sacrifice for me and for the rest of the world. Thank You that through the eternal Spirit, He offered Himself without blemish to You.. so that by faith, my conscience is cleansed from dead works, and I have been given the sufficient grace to love and serve You in newness of life and in purity of spirit. May I do so to my life's end to Your praise and glory. This I ask in Jesus' name, AMEN. 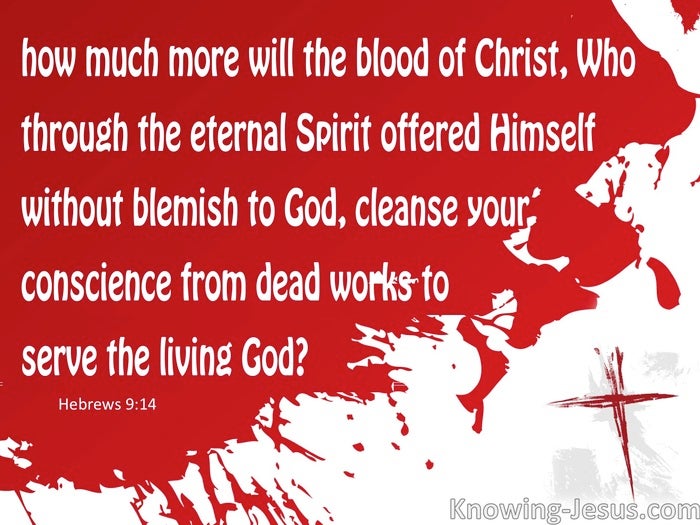