where Jesus has entered as a forerunner for us, having become a high priest forever according to the order of Melchizedek. 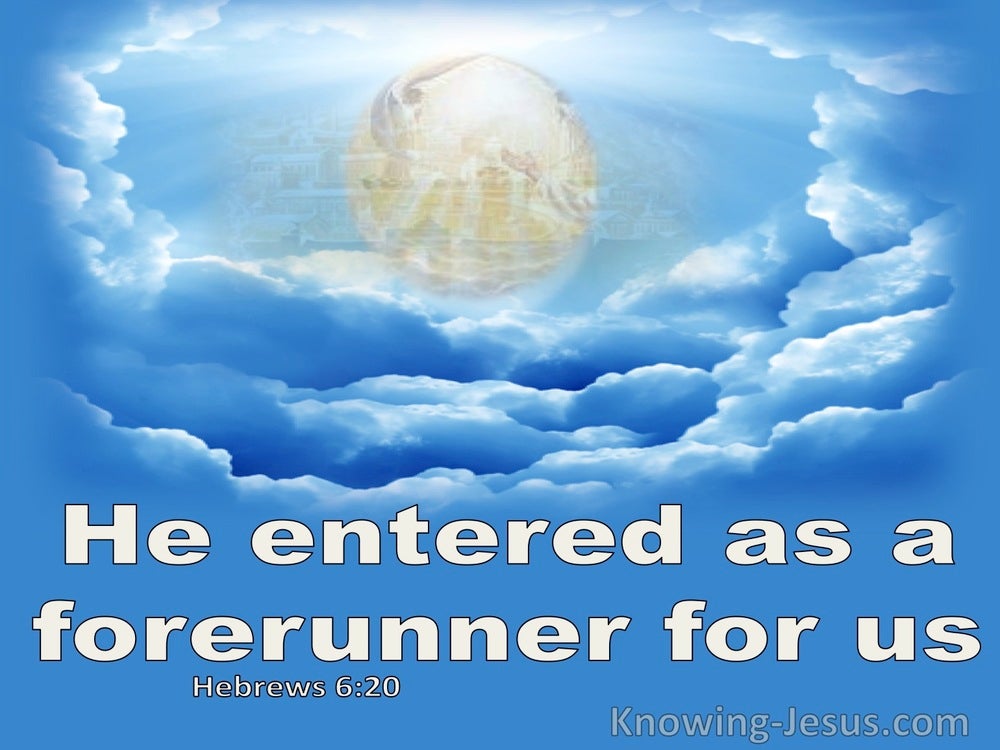 Hebrews gives a balance between exposition and exhortation. While some passages systematically lay out doctrinal truth, they are interspersed with those that encourage us to apply what we learn in our everyday life or warn of the consequences of failure.

In chapter 6 the author seeks to develop our doctrinal understanding and strengthen our faith in the never-failing, steadfast devotion of Christ towards us. He fastens the confidence we have in Christ to His finished work at Calvary, which secured our forgiveness of sin, our eternal future, and our confident access into the throne-room of grace and restored fellowship with the Father.

Christ is not only the First-fruit from the dead, assuring all who believe in Him will also be physically resurrected... but His entrance into the heavenly realm following His ascension, prefigures our own thrilling access into the holy place of God and our promised heavenly inheritance.

When the Lord Jesus went ahead of us, "He entered as a forerunner for us... and in so doing, became the Mediator between God and man and took up His appointed place as God's eternal High Priest, according to the order of Melchizedek."

What a glorious truth that when Jesus ascended into heavenly places to act as High Priest forever - after the order of Melchizedek, He entered as the forerunner of the Church... so that at the right time we too will be ushered into the holy presence of Almighty God. Christ loved the Church so much that He gave Himself for her and entered behind the sacred veil as the Precursor to the time when we shall see Him as He is... and be made like unto Him.

To consolidate our understanding, we find the author, once again illustrating his teaching from Old Testament Scripture and reminding us of Abraham's significant meeting with Melchizedek - the Sovereign Priest of the most high God - the King of righteousness and King of peace.

The priesthood with which God's people are connected is not the limited, Levitical priesthood, which was an earthly office and transferred from one generation to the next, but the permanent Priesthood of the heavenly Man which is both superior and eternal.

When Hebrews was first written, there were many Jews who found it very difficult to transition from the dispensation of Law to the dispensation of Grace, but the references to Melchizedek throughout Hebrews, contrasts the superiority of Christ's permanent position as our eternal, heavenly High Priest and Sovereign Lord, with the inferior status of the temporary Aaronic priesthood, with its earthly limitations and temporary nature.

The more one becomes familiar with Old Testament 'types' (like Melchizedek and the Aaronic priesthood) and their New Testament 'antitype' (the Lord Jesus Christ and His eternal High Priestly position and Sovereign rulership in heavenly places) the greater becomes our understanding of superiority of Christ, His never-failing, steadfast devotion towards us, and His entrance into heavenly places as forerunner for the Church.

Heavenly Father, thank You for Jesus and all that He has done for me and for all who are born from above. Thank You that He is our heavenly High Priest Whose entrance in heaven guarantees our own position in the coming kingdom of Christ. Increase my understanding of Your Word and all that it teaches, and I pray that many, both Jew and Gentile alike, would come to a saving knowledge of the Lord Jesus and swell the numbers of those that are saved - by grace through faith in Him. This I ask in Jesus' name, AMEN. 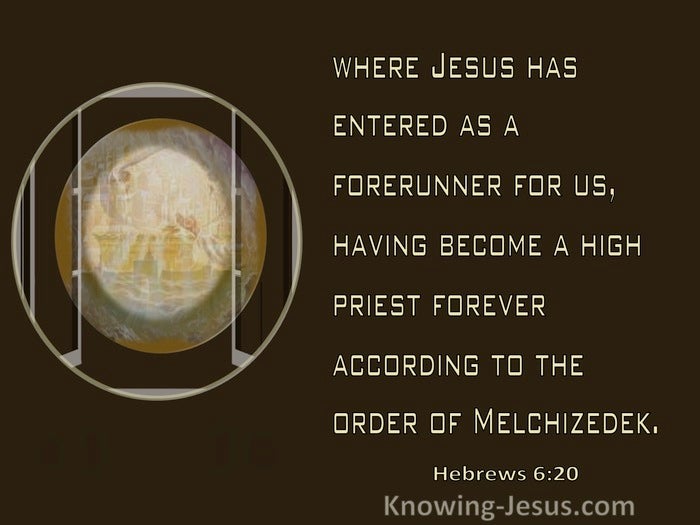 Choose a Verse from Hebrews 6