In His great High Priestly prayer, which was delivered to the Father on the night that Christ was betrayed, the Lord Jesus prayed that Christians would be united together as one - for we are one-in-Christ.

We are one body, with one faith, and one Lord. We are one Church with one truth, one life, and one blessed hope. We are accepted by the one God and Father of our Lord Jesus Christ Who is the one and only Mediator between man and God. And we are instructed to go into all the world and tell forth the good news of the gospel of Christ.

But in those days before His death, Christ also warned His followers that they would be hated of all men for His sake. Jesus warned us that in this world we would have tribulation and trials because we are identified with Him. They hated Him without a cause and they will hate us too, because we are one with Him - but we are to be of good cheer because Jesus has overcome the world.

During our sojourn on earth, we are living in a fallen world but are not part of the satanic world system. We are in the world but we are not part of the world - for our citizenship is in heaven. We are aliens and strangers that are passing through a foreign land on a journey to our heavenly home. But we have the message of salvation written in our hearts.

The gospel of salvation we proclaim is a wonderful message of hope to those that believe on the Lord Jesus Christ. We are a fragrance of Christ among those who are being saved and we share a message of hope, encouragement, and life. However, to the unsaved our message is the toxic message of destruction... to those that reject His offer of salvation and ridicule His holy Word of truth, it becomes an aroma of death to death.

Paul was called by Christ to deliver the good news of the gospel of grace to the Jew first and also to the Gentile. However, as Christ's chosen servant and God's appointed apostle to the Gentiles, Paul soon discovered two very different responses to the good news he was sharing. To the saved it is the aroma from life to life, but to the other is a stench - from death to death.

To those of us who believe that Christ died on the Cross, was buried, and rose again the third day for the forgiveness of sins and life everlasting, Paul's message is like a sweet, aromatic perfume. It is a sweet-smelling fragrance to those that are being sanctified by grace through faith, for we are passing from one type of glory to another. As we journey towards our heavenly home, we are being conformed into the image and likeness of the Lord Jesus Christ by the power of the indwelling Holy Spirit. The gospel of grace is an aroma from life to life... from a new, spiritual life in Christ at salvation... to everlasting life with Christ Jesus our Lord - in the eternal ages to come - for those whom He justified He also glorified. He Who began a good work in us at salvation has promised to complete it when we go to be with Him in heavenly places.

However, to the unbeliever who rejects God's offer of salvation, our message of hope is a stench of death. The truth of the glorious gospel of grace to rebellious humanity is like a rancid, putrefying corpse. To those that are dead in their sins, it is an aroma from death to death. They are not only spiritually dead in their trespasses and sins but they also have the condemnation of death on their soul - because they do not believe on the only begotten Son of God.

Paul recognises that delivery of the glorious gospel of Christ is a tremendous responsibility, for the message of the Cross has far-reaching consequences... and so he asks the question, "who is adequate for these things? Who is qualified for a service like this? Who is competent to carry out such a service to the Lord, as the preaching the gospel of grace to a lost and dying world?"

And although his rhetorical question is not answered by Paul himself, we know we are ALL qualified, by grace through faith in Christ. We are all equipped as ministers of reconciliation and we are all called to share the good news of the gospel to the lost, as well as giving encouragement to those that are being sanctified.

May God use each of us to minister to the saved and unsaved alike - so that many who are lost in sin and heading for eternal damnation may hear the good news of the glorious gospel of grace and come to faith in our one and only God and Saviour - Jesus Christ our Lord.

Heavenly Father, thank You that I am Your child and that I am being changed from glory to glory by the power of the Spirit. I pray that You would use me to witness of Your goodness and grace to both the saved and to those that are lost. Shine the light of the glorious gospel into the hearts of those that are dead in their sins - so that they may come to a saving faith in Jesus Christ my Lord, in Whose name I pray, AMEN.

The Dispensation of Jesus Christ
John 15:2 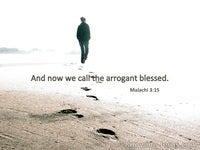 Malachi 3:15
Prearranged
Have you Considered? (JOB-study 1)
Trust Me Alone