But thanks be to God, who always leads us in triumph in Christ, and manifests through us the sweet aroma of the knowledge of Him in every place. 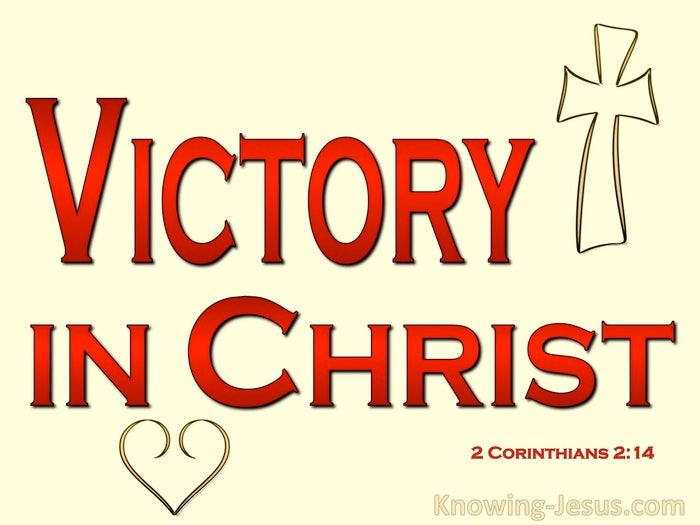 As Christians, we are the most blessed people on earth, for in Christ we have become victorious in life - and through Him we have been declared triumphant over death. We are identified with His Person, His perfections, His glorious victories, and His resurrected life - and it is all by faith.

Because we are in Christ by faith, we have passed from death to life-eternal and are one with Him. Because we have been born again, we are accepted forever by the Father. We are declared righteous because of our union with Christ Jesus our Lord.

In this second letter to the Corinthians, we discover Paul encompassed by the sort of difficult circumstances that would cause most people to fall apart. Paul tells his readers that he was pressed out of measure and attacked by the enemy of our souls, insomuch that he, "despaired even of life!" He was tossed about by every possible difficulty and danger, but Paul learned a valuable lesson... that he must not trust in his own abilities but only in God.

Paul discovered that by prayer and supplication with thanksgiving, God's promises are sure, His Word is true, His grace is sufficient, and all things work together for good to those that love the Lord their God with all their heart and are fitting into His plans and purposes. Paul knew that in his own strength he could not overcome the sin nature that governed his life. Jesus had said, "without Me you can do nothing." But it was a joyful day when Paul discovered, "I can do all things through Christ, Who gives me the victory - because His grace is sufficient and His strength is perfected in our weaknesses."

Despite all the difficulties and dangers that encompassed his life, Paul was able to i) experience in his life... ii) declare with his lips... iii) write in this letter to his Christian brothers and sisters in Corinth that the answer to all our needs and the antidote to all our fears is Christ, "but thanks be to God," was Paul's victorious cry when he discovered the truth, "thanks be to God, Who always leads us in triumph in Christ, and manifests through us the sweet aroma of the knowledge of Him in every place."

Paul's bold confession of God's sufficient grace and victory over every issue he faced, gave witness to a life that had died to self and lived only for Christ. It demonstrated Paul to be a man who followed in the footsteps of the Lord Jesus Himself Who lived in total dependence on His Father by presenting his life as a living sacrifice - a freewill offering - a burnt offering that is holy and acceptable unto God.

There were a number of different sacrifices and offerings that the people of God presented to the Lord in Old Testament times. Perhaps the one that most typified the life of Christ and the life of the apostle Paul, was that of the burnt offering which was a freewill offering - given to the Lord out of love and not out of duty.

The burnt offering was something of value, given to God freely and with great joy. It was a sacrificial offering that showed deep loving respect for the Lord and a passion to carry out His will no matter what the cost. It was not an offering that was part of any legal ritual or one that had been designed by God to cover sin or satisfy His justice - like the sin-offering or the Passover sacrifice. The burnt offering was a gift... freely given, joyfully presented, and lovingly offered to God, which became a sweet-smelling savour to the Lord.

Paul explains that when we are able to continue to trust God even during those tough times when we are pressed out of measure, tossed about by every possible difficulty and danger and attacked by the enemy of our souls, then our life becomes a sweet aroma to the Lord... such that the spreading of the glorious gospel of Christ becomes the wonderful consequence of a life consecrated to God.

May our lives become a living sacrifice holy to the Lord and honouring to His name. When we are encompassed by many sorts of dangers and difficult circumstances, may we be willing and able to give thanks to our heavenly Father in all things - knowing that He always leads us in triumph in Christ and manifests through us a sweet-smelling aroma of the knowledge of Him in every place.

Heavenly Father, thank You that no matter what I may have to face in life, that in Christ I am always led to victory. I pray that as I rest in Him, by prayer and supplication with thanksgiving, that I may always be led in triumph to Your praise and glory. May my life be a living sacrifice - a burnt offering that becomes as sweet-smelling perfume of the knowledge of Him in every place You may choose to send me. I pray this in Jesus' name and for His glory, AMEN. 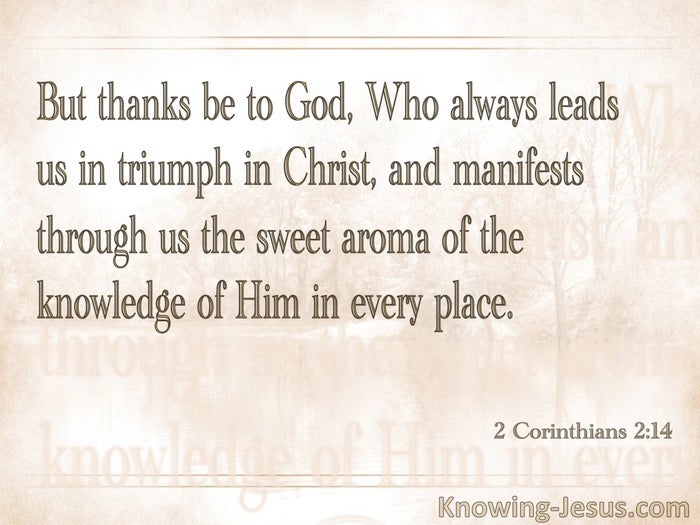