For it is for this we labor and strive, because we have fixed our hope on the living God, who is the Savior of all men, especially of believers. 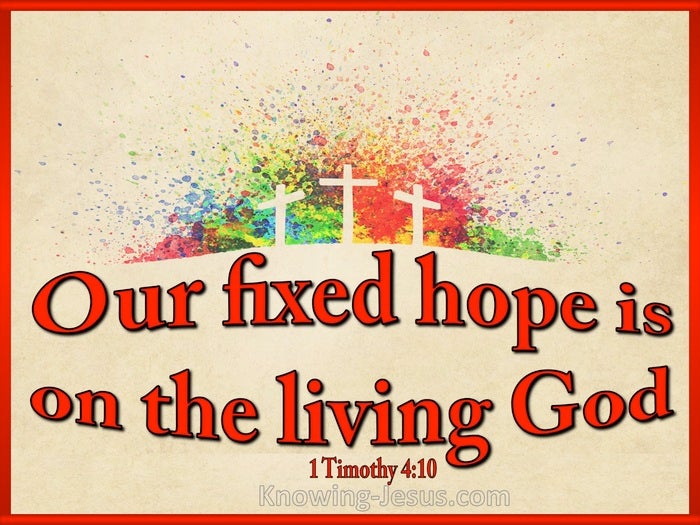 Although Christ is the potential Saviour of all men, He is the actual Saviour of those who truly trust in Him alone, by grace through faith. Paul knew that sound doctrine is crucial, and emphasised the importance of preaching the Word in sprit and in truth. He knew that a good minister of the word would keep this as a priority in his life and ministry, but he also gave stark warning of an infestation of false teachers and doctrines of demons.. energised by Satan, which is designed to lead many people astray from God's promise of salvation.

Because he knew these hypocritical teachers were willfully turning men and women from the true gospel of Christ, and enticing many into error .. Paul laboured and strove, day and night.. to preach the word of truth to all men.. and bring many into the kingdom of God, because Paul had confidence in the fixed hope we have in the living God - that Christ died for the sin of the whole world - so that whosever believes in Him would not perish but have everlasting life..

It is not God's will that any should perish but that all men should come to repentance and turn from their sin and be saved. Indeed the Lord Jesus Christ came to die for the sin of the whole world - and not only for those who would one day trust Him as Saviour. The Lord Jesus is the Saviour of the whole world and He bore the sum total of all the accumulated sin of the entire human race upon His shoulders on Calvary's cross. Jesus became accursed of God, so that whoever would look to Him for life would be saved.

The Bible tells us that Christ is the 'propitiation for the whole world.' Christ's death on the cross was sufficient to atonement for the sin of the whole of humanity - and His death completely “satisfied' the wrath of God. “Propitiation' means “satisfaction,' and when God's wrath was poured out on Christ as the full and final payment for the sin of the whole world - God was fully satisfied.

Because God provided adequate provision for the salvation of every single man, woman and child, by faith.. Paul can legitimately call the Lord Jesus Christ, “the Saviour of all men.' Christ's death on the cross paid the redemption price for the sin of the whole of humanity - so that whosoever believes on Him will not perish but have everlasting life.

Although the debt for mankind's sin has been paid in full, not everyone will receive God's amazing free gift of grace, for the forgiveness of sins. Everyman has the potential for salvation but those who reject His free gift of grace.. by faith alone in Christ alone, will one day be fully and finally separated from God.

It is not because of sin, that some will experience this final separation from their heavenly Creator.. for the payment of all sin has already been made - Christ is the propitiation for all man and God is fully satisfied with His sacrifice on the cross. People are eternally separated from the Father.. not because of their sins, but because they rejected the Lord Jesus Christ as their Saviour - for He who believes in Him is not condemned; but he who does not believe is condemned already, because he has not believed in the name of the only begotten Son of God.

Paul tells us that: Jesus is the Saviour of all men - especially those who believe. But how sobering to realise that although His death had the capability to save everyone, not all will accept His offer of free salvation. Although Christ is the POTENTIAL Saviour for all men, He is the ACTUAL Saviour for those who truly trust in Him alone, by grace through faith.

Let us make ever effort to preach the word to a lost and dying world and share the glorious gospel of grace to all with whom we come in contact.. knowing that whosoever believes in Him will not perish but have everlasting life.

Heavenly Father, thank You that I am saved by grace through trusting in Christ as the propitiation for my sins. Thank You that You loved the world so much that You gave Him to be the offering for the sins of all mankind. We pray that many may come to faith in Christ today and that You would give me opportunities to preach the word of truth to all with whom I come in contact. In Jesus name I pray, AMEN. 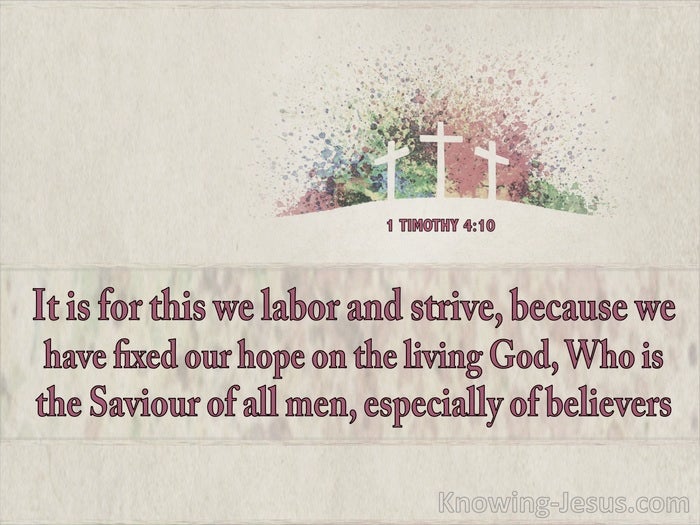 Choose a Verse from 1 Timothy 4