Now it came about, as she continued praying before the LORD, that Eli was watching her mouth. 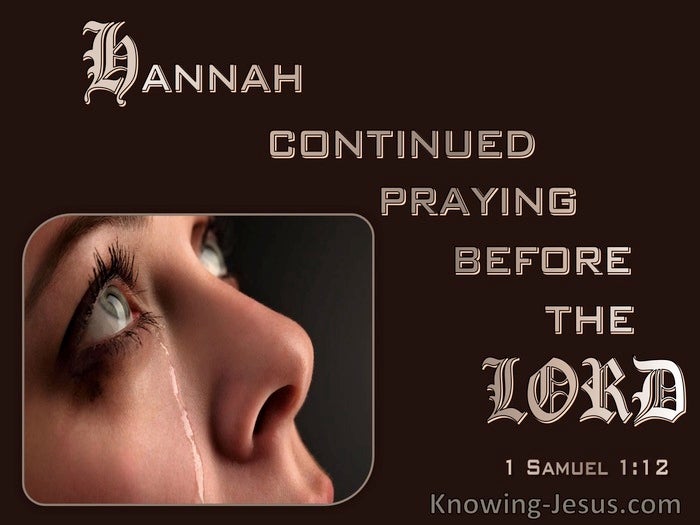 The life and times of Samuel span the period when Judges' ruled over the nation of Israel, to the times of the Kings. Samuel was the last of the nation's Judges and was the prophet who reluctantly anointed Israel's first king, at the insistence of the people. Samuel was consecrated to God as a Nazarite, from his mother's womb, for 'no razor touched his head,' and the event that led up to his conception and birth is a most beautiful example of God's grace - where good is brought out of evil and thrilling joy is born from the deepest pain.

Hannah was a woman beloved by her husband but her bitter disappointment at being barren was exacerbated because her husband had a second wife, who cruelly taunted her about her infertility. Hannah was a godly woman who trusted the Lord and participated in all the nation's feasts, festivals and sacrifices... but her heart was troubled and she determined to pour out her grief to the Lord in prayer.

It was at the end of one such feast days that in sorrow of spirit, Hannah prayed to the Lord and wept before Him, with many tears. Making a vow to God, she prayed, "Lord of Hosts - if You will take notice of Your hand-maiden's affliction... if you will remember and not forget me, and give Your servant a son, I will give him back to the Lord all the days of his life - and his hair will never be cut."

The distraught woman pleaded with God to give her the son she longed for, and in return she would give him back to the Lord all the days of his life. She no doubt knew of Sarah's joy at the birth of Isaac, and may have compared her situation with Rachel.. Jacob's favourite wife, whose humiliating barrenness was eventually removed with the arrival of baby Joseph.

By faith, Hannah acknowledged God as 'the Lord of Sabaoth' - the Lord of heavenly Hosts. Her trust in God is beautiful to witness. She did not make a great display of praying a loud, repetitive prayer to demonstrate her spirituality to others. Hannah came to God in her helplessness and pain, and she poured out the deep desires of her heart to the Lord. Her anguish was so deep-seated that she whispered her words under her breath and breathed out her need to the Lord, silently.

Her earnest prayer could not be heard by Eli, the old priest, who watched her moving mouth with interest. The spiritual state of the nation had become so shocking, that he did not consider she was a woman in anguish, seeking the Lord in silent prayer. He assumed she was drunk from strong liquor, like so many of Israel's unsanctified people.

It was not long before the old prophet realised that Hannah's cry to God was serious and the Lord used him to comfort her and bid her go her way in peace - promising that God had heard her prayer and would answer her request. Hannah believed him and was soon rewarded with Samuel, her precious gift from God.

What a shining example Hannah is to all who find themselves in distressing and painful situations. She was ready and willing to commit the desires of her heart to the Lord... and God not only fulfilled the desire of her heart, but used the son she would bear to play an important role in the history of her people, and in God's own plan of redemption for all whose hope is in Him.

It is not the selfish prayer that says 'give me what I want', that reaches the heart of God, but the unceasing heart-cry of helplessness that says... without You Lord I can do nothing - Thy will be done in my life - use me Father, to fulfil Your plans and purpose. It is often the cry of helpless dependance that causes God to give us the desires of our heart - for when our human will is in line with God's perfect will, the desires of His heart become the yearning of our own heart.. and joy is born out of our pain.

Heavenly Father and Lord of Hosts, thank You that You are a God who hears the cries of Your children and in Your grace You not only respond to our helplessness, but You use all things to work together for our benefit and for Your greater glory. Help me to live in an attitude of trusting prayer and I pray that You would align the desires of my heart to Your perfect will for my life.  Thank You that through Christ we have continuous access to Your throne of grace, for mercy to find help in time of need. Keep me from the selfish prayers.. and fully dependent on You and may Your will be done in my life - this I ask in Jesus' name, AMEN. 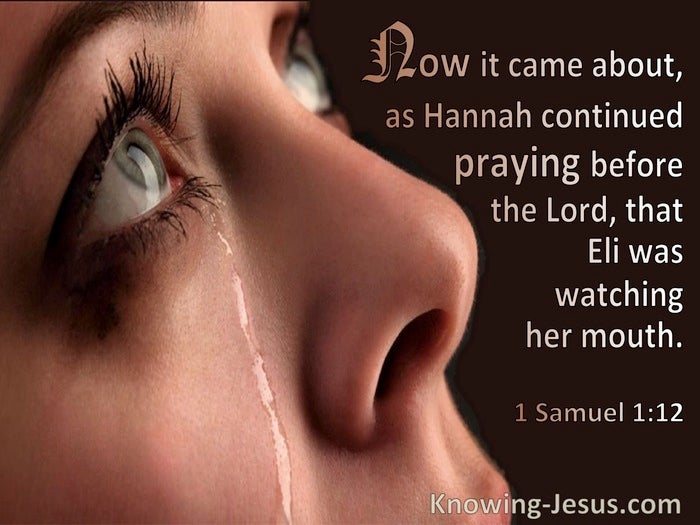 Choose a Verse from 1 Samuel 1