By this the love of God was manifested in us, that God has sent His only begotten Son into the world so that we might live through Him. 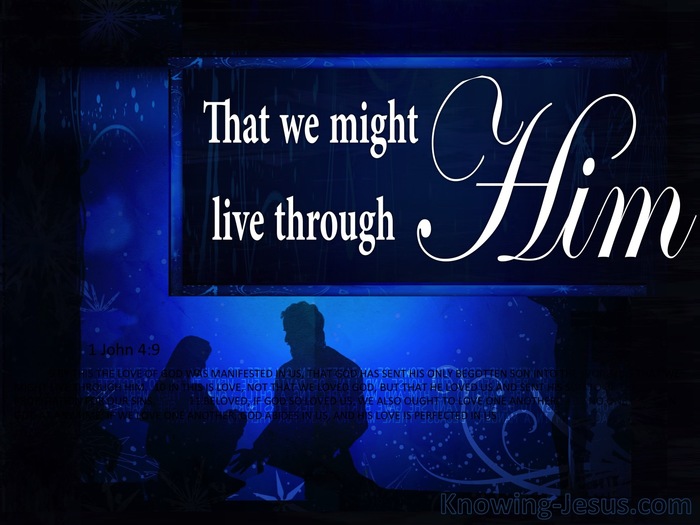 The heart of God is manifest in His Spirit of love. He demonstrated His love towards man in a multitude of ways, but the incarnation of His dearly beloved Son, the Lord Jesus Christ, is the brightest and best signification of the love of God towards mankind. The love of God is not only demonstrated through Christ's supreme sacrifice of Himself on the cross, but is also revealed in the Father, Who sent the Son of His love to be the Lamb of God Who takes away the sin of the world.

The greatest manifestation of God's love towards a cursed world and a condemned race was shown at the appointed time, when God the Father sent His only begotten Son into the world to be the substitute for our sin. His death paid the price for our sin, so that all who believe on Him would never perish but live eternally, through Him.

Never will we understand the depth of His love for us, for it pleased the LORD to bruise Him. How could it be that the Father was willing to wound His beloved Son - to crush Him, and cause Him to suffer death on the cross so that we might live? How could it be that God the Son was wounded for our transgressions and bruised for our iniquities? It is the mystery of all mysteries, that the chastisement of our peace was upon Him - and with His stripes, we are healed.

The greatest possible example of the love of God towards fallen man is that God loved the world so much that He gave His only begotten Son, that whosoever believes on Him would not perish but be saved. What amazing love, that through faith in Him sinners, such as you and I, might be saved by grace and raised into newness of life. God's heart is the Spirit of love and all other expressions of love towards us are eclipsed by the superlative gift of the dearly-loved Son of God.

The dimensions of God's love are expressed in the gift of His Saviour-Son. The length and breadth and depth and height of God's amazing love is immeasurable. His wonderful grace and inexorable love is correspondingly commensurate with the eternal death and shocking damnation, which the fallen race of sinful humanity so justly deserves. It was for love of us that He died. It was to declare a fallen sinner righteous in the sight of a holy God, that the Word became flesh and was born into His fallen creation - so that He could become sin for us.

How we glorify God for the supernatural love of the Father of our Lord Jesus, Who has blessed us with all spiritual blessings in heavenly places. It is only through His Spirit of life within, that we can be made a new creation in Christ. It is only by faith in HIM that we have become a member of His mystical Body; are indwelled by the Spirit of God and are given the sufficient grace to live in newness of life.

It is only through the imputed life of Christ, which we receive at salvation, that we can live more abundantly and live eternally. It is only the new-born-again life of Christ that can enable us to say: it is not I that live but Christ that lives in me. It is only through the death of this perfect Man that the power of death can be forever broken, in the lives of all who believe on the only begotten and dearly beloved Son of God.

It is because of the great love of God that we were redeemed from the slave-market of sin; declared righteous in His eyes; rescued from the terrible judgement of God, we so justly deserve, and were made His children and joint-heirs with Christ - not because of any good thing that we have done, but because of His great goodness.

This is how God's love was revealed among us - God sent His unique Son into the world so that we might live through Him - not only in this world but in the eternal ages to come. May we never, ever hold lightly the LOVE that God has for us.

Thank You Lord for sending Your dearly-beloved and only-begotten Son into the world for love of me. Thank You that He was born to die for my sins so that I may be born-again and live life more abundantly and eternally in Him. Thank You that in Christ I am set free from fear of death and the terrors of hell. I pray that Your love may be shown forth not only in my thankful praise but in a life that is lived for You, in Jesus'  name I pray, AMEN. 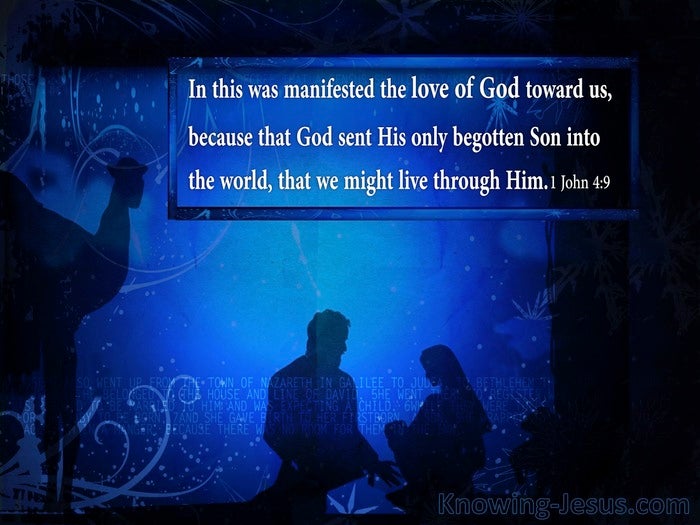 Choose a Verse from 1 John 4

The House Of God 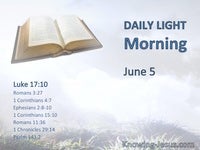 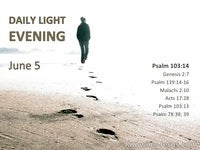