Then he taught me and said to me, "Let your heart hold fast my words; Keep my commandments and live; 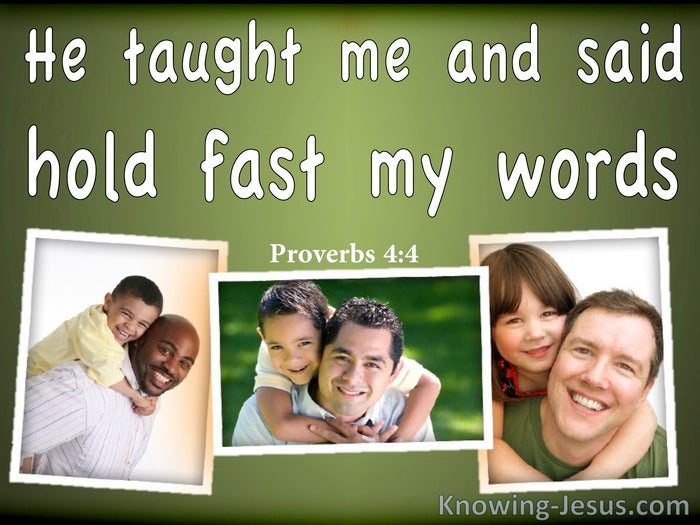 Godly wisdom comes from the Lord and enables the one who is endowed with wisdom, to discern what is good, to distinguish between what is true and what is false.. and to judge that which is godly and righteous.

There is much written in the word of God about wisdom, and the young prince Solomon, who was endowed by God with the greatest gift of wisdom, passed on a lot of wise instruction to his sons, much of which he had learned from his father, king David.

Like his father, Solomon recognised that wisdom is a family treasure, that can be passed-on from father to son. Indeed, he gave much of the same godly instruction to his own sons, that he himself, had been taught as a youth. Let Your heart hold fast to my word, was the serious warning he offered his children, Keep My commandments and the directives I am giving you, so that you will live a godly and righteous life.

Solomon taught his own children to pay attention to gaining insight into subjects of importance, and to cultivate friendships with the older generation, who have a lifetime of wisdom and experience to impart to the youth.. to those who are wise enough to listen!

Wisdom affords protection and honour, and becomes an enduring quality that provides much reward and respect. Although in later life Solomon strayed from his father's wise instructions, it is obvious that Solomon had a great deal of insight into the true meaning of life, and the best way to live - and many of his wise word are found in the book of Proverbs:-

In all your ways acknowledge Him, and He will make your paths straight. Proverbs 3:6.  The Lord gives wisdom; from His mouth comes knowledge and understanding. Proverbs 2:6.  When the righteous increase, the people rejoice. When the wicked rule, the people groan. Proverbs 29:2.  A heart of peace gives life to the body, but envy rots the bones. Proverbs 14:30.  A man who is kind benefits himself. The a cruel man hurts himself. Proverbs 11:17.  Blessed it is the one who finds wisdom and the one who gets an understanding, for the gain from her is better than gain from silver, and her profit better than gold. Proverb 3:13-14.

Yes, there are many such words of wisdom that are recorded in the book of Proverbs. The fear of the Lord is the beginning of wisdom and sound understanding belongs to those who practice it.. however, those that despise wisdom and instruction are considered by God to be fools. The message that this wise man sought to pass onto his sons, was that the road to righteousness, the path to peace and the highway to a true understanding of the Lord, is hedged-about with wisdom from above.

In Christ are found all the treasures of wisdom, knowledge and understanding, and we who have been saved by grace through faith, have direct access to the Lord Himself, for we have the mind of Christ - and any of us who lack wisdom, are entreated to ask God - Who will give generously to all, without finding fault.

Heavenly Father, thank You for the wise words that we find in the book Proverbs. Help me to pay attention to gaining wisdom and understanding, knowing that the fear of the Lord is the beginning of wisdom, and knowledge of the Holy One is understanding. Thank You in Jesus name, AMEN. 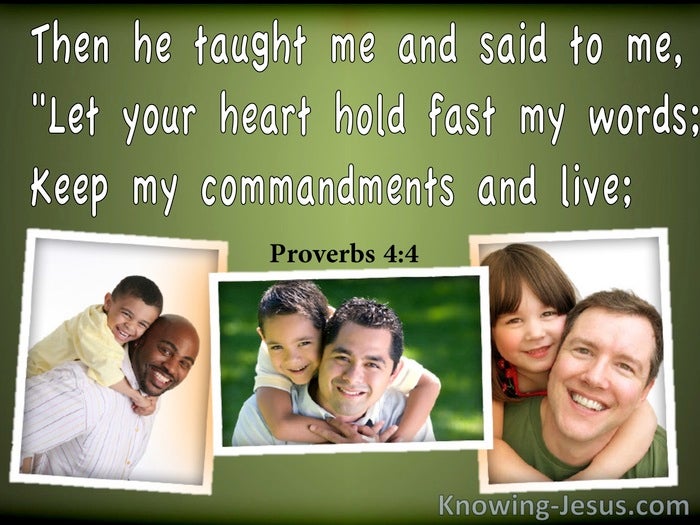 Choose a Verse from Proverbs 4