For to me, to live is Christ and to die is gain. 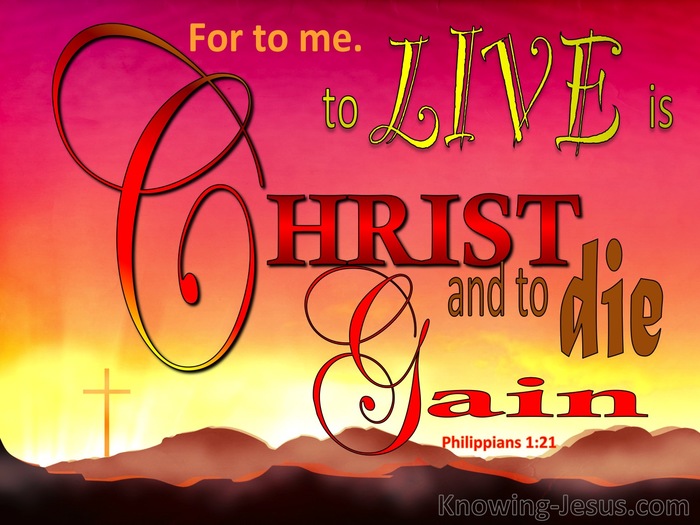 Paul's had a passionate love for His Saviour. He wanted to exalt the Lord Jesus Christ in every area of life. He wanted the beauty and magnificence of His wonderful Saviour to eclipse all else. He rejoiced when the gospel of Christ was proclaimed, and wanted to demonstrate that suffering for Christ in this life, would bring his Saviour great praise and glory.

Paul's dear desire was to magnify the Lord and enable the brilliance of the glorious gospel of Christ to shine out over this darkened, sin-sick world. He longed that those who were dead in their trespasses and sins would be attracted to Jesus, and find their great salvation in His Person and work. He wanted the good work God has started in the lives of those who believe, to be completed in the day of Christ, for their eternal benefit and God's greater glory.

Paul's spiritual ambition, earnest expectation, and eager hope was to enhance and elevate Christ in the heart and mind of others. He prayed that he would be emboldened to preach the gospel of God, according to the might of His great power, and Paul longed that the Lord Jesus would be glorified in his body - in thought, word, and deed, whether by the life he lived or the death that he died.

Paul's purpose and philosophy in life was to live for Christ, even when buffeted by storms, maligned by his enemies, confined to a prison cell, or facing death. He had one fixed purpose in life, and one unalterable plan - to live for the glory of Christ and to preach the Word of truth.

Paul was a man who knew that nothing in heaven or earth could separate him from the love of God, which is in Christ Jesus. He knew that his prison bars would not prevent the gospel from being spread abroad. "For me to live is Christ and to die is gain" was Paul's firm purpose and his fixed delight.

Paul's motivation in life was to elevate Jesus. But when he wrote these words he was incarcerated in a Roman prison cell, with the sentence of death hanging over him. "For me to live is Christ", was this man's non-negotiable future, and yet he knew that death was the gateway into the bodily presence of Christ. Even a Roman gallows could not prevent him from entering into heaven, and so he was able to conclude, "and to die is gain."

I doubt Paul would have understood the impact his letter to the Philippian Christians, and his other epistles would have, on many millions of souls, down through the centuries. Paul may have been confined to a prison cell, but his hope remained founded on Christ. And God used his night of suffering to be turned into many mornings of joy, for those who have treasured the words he wrote. "For to me, to live is Christ and to die is gain."

Although his passion was to preach Christ crucified and to bring as many lost souls into a saving knowledge of his Lord and Saviour, Paul also knew that to be absent from the body was to be present with the Lord.

What freedom to be able to say that whether I live or die, Christ is mine, and whether in heaven or on earth, Christ is my portion and I am content. Living for Christ, whether in heaven-above or in the earth-beneath, are both filled with great advantages - when love for our Saviour and serving Him is our sole ambition and passionate aim.

The unbeliever holds onto the things of this deteriorating world system, and death is often seen as an enemy to avoid. The future hope of fallen man is tied up with the things of this world and death is seen as the spoiler of life But the sting of death is removed for the believer, and life becomes an opportunity to serve Him, while death is the occasion to be translated into His presence and be with Him forever.

The sole aim of every Christian heart should be to glorify the Lord, and to serve Him in full abandon. A life with a passion for Christ gives rise to a life of victory, where the power of faith and the sufficiency of His grace, overcomes the difficulties of life and the sting of death. When we can say with Paul, "for me to live is Christ and to die is gain" we discover that a life lived for God becomes a life that is willing to die for Him - and that death is nothing more than the glorious entrance into His marvellous presence.

Loving Father, thank You that I am Your child. May Your will be done in my life and may I live in a way pleasing to You. Thank You that my times are in Your hands, and I pray that I may live for Christ every day of my life, knowing that to die in Him is gain. Enable me to finish the work that You have prepared for me to do, and keep me through all life's difficulties, knowing that Your grace is sufficient. In Jesus' name, AMEN. 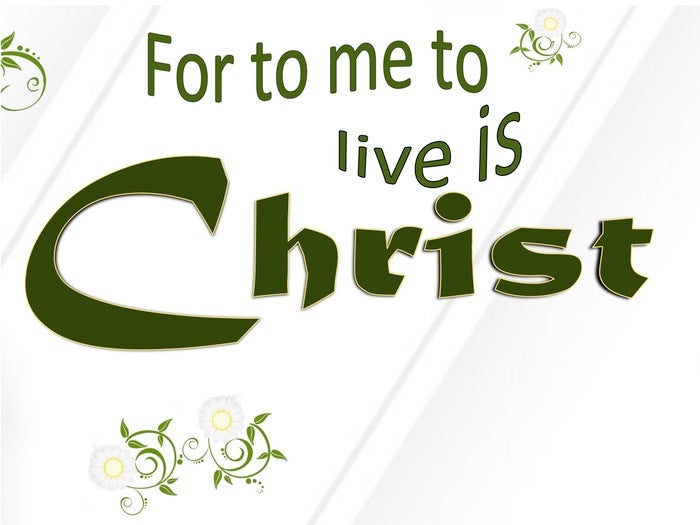 Choose a Verse from Philippians 1