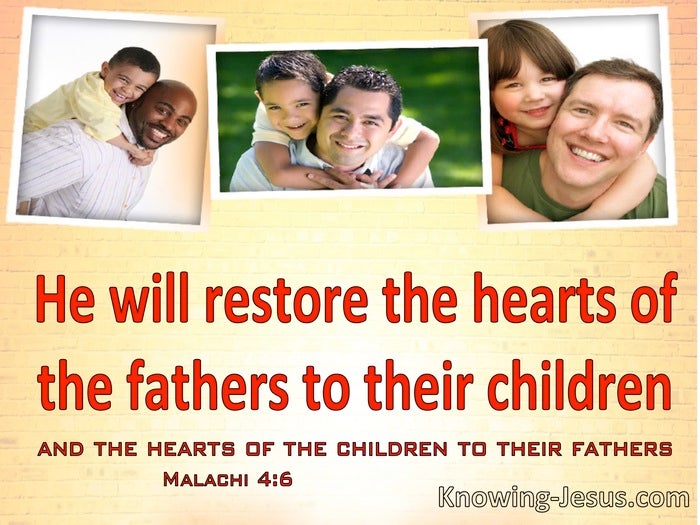 As the prophetic voices in Old Testament scriptures are silenced, the final message to Israel is from the prophet, Malachi. He describes, in awesome solemnity, the coming Day of the Lord, when the full force of God's wrath will be poured out on a God-hating, sinful world - which rejected the promised Messiah and refused His gracious gift of salvation.

That time of terrible tribulation will come like a burning furnace. Arrogant and wicked people will be utterly consumed like stubble - but those who trust in the Lord with all their heart will rejoice and be glad. They will skip playfully... like young calves coming out of their confined stalls.

It is in the concluding section that Malachi offers words of hope and encouragement. He reveals that blessings are reserved for the faithful few, who honour the Lord, and look with expectation, for the coming 'Consolation of Israel'. God's little remnant will welcome this "Son of Righteousness', Who will come to His people with healing in His wings.

The faithful few are urged to remember the instructions, statutes and ordinances of Moses. This book of instruction is not to depart from their mouth. They are to meditate on it day and night and be careful to observe everything it says. They are also to watch for the coming of Elijah - whom God promised to send as the forerunner of His anointed King.

Malachi explained that Elijah would come before the great and terrible day of the Lord, to call His people to repentance and restoration. "He will restore the hearts of the fathers to their children and the hearts of children to their fathers", - otherwise, God declared He would come and strike the land with a curse.

Elijah was to come as a voice in the wilderness to restore the Law to Israel. He was to prepare the way of the Lord and announce that the promised Kingdom of God was near. And Elijah the prophet came 2000 years ago, but they did not recognise him.

Jesus told us that for those in Israel, who believe in Him has their... Elijah has already come. The spirit and power of Elijah rested on John the Baptist from his mother's womb... and he turned the hearts of many back to the Lord, and stayed God's hand of judgement on the Land of Israel, for a season - but most didn't recognise him.

Elijah, the prophet, also met with Christ on the mount of transfiguration, together with Moses - Israel's great law-giver. Elijah and Moses met with Jesus and spoke of his exodus from the world, as Peter, James and John watched-on in awe and wonder. Moses and Elijah were two witnesses of His glory, on that mountain, when they spoke with Him about this forthcoming death.

For the little remnant of Israel - both 'pre' and post-cross believers, Elijah has already come. Their hearts have been restored, and they have been redeemed by Christ - through the blood of the New Covenant. But the rest of God's people, who have not trusted Christ for their redemption, must face the great and dreadful day of the Lord, when the full force of God's wrath will be poured out on this Christ-rejecting, sinful world.

Praise God that the 'Time of Jacob's Trouble" is designed to bring His people back to Himself - so that the nations of the world may know that HE is the Lord.

Heavenly Father, we praise and thank You for Your wonderful plan of redemption. Thank You for Your people Israel, through whom came the Law; the prophets; the precious promises and our heavenly Messiah. Thank You for sending John the Baptist in the spirit and power of Elijah to turn my heart and the hearts of many in Israel and around the world, to faith in Christ. We pray for those in Israel who have not yet trusted Christ as Saviour and pray that their blindness to the gospel message would be lifted, so that they may be restored into fellowship with You, by faith - this we ask in Jesus' precious name, AMEN. 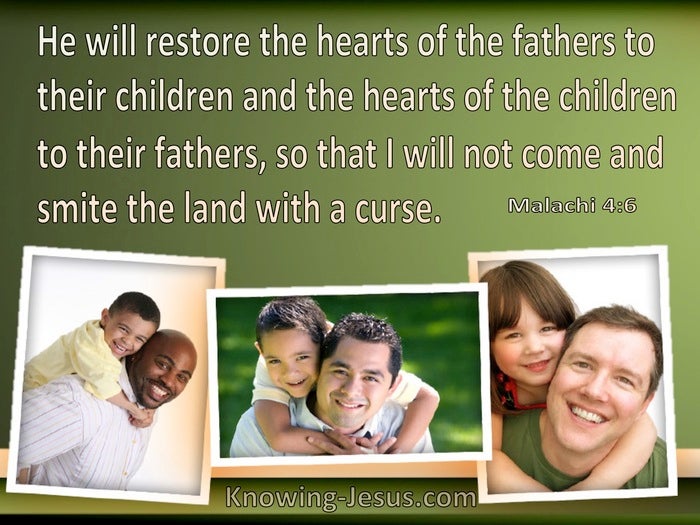 Choose a Verse from Malachi 4