So Jesus said to them again, "Peace be with you; as the Father has sent Me, I also send you."

Just as the transfiguration was a tiny preview into the coming earthly kingdom, when Christ would rule and reign as King of kings and Lord of lords.. so the things that Christ said to His followers and the things that Christ did with His disciples following His resurrection.. was also a tiny foretaste of the coming Church dispensation, when believers not only have peace with God - by grace through faith in His death, burial and resurrection, but they have the peace of God in their hearts - They have the indwelling Holy Spirit, guarding their hearts and giving rest and peace to their soul, as they abide in Christ.

Christ had promised to send the Spirit of comfort into their hearts after His departure into heaven - the Spirit of love and life and joy and patience and hope and wisdom and grace and PEACE. And so as the time for His ascension drew ever closer and His disciples were to take full responsibility to carry on the work that Lord Jesus had started, He said to them once again: Peace be with you; as the Father has sent Me, I also send you...

Earlier the Lord Jesus had promised to leave His peace with His faithful followers: My peace I leave with you; My peace I give unto you: not as the world gives, give I unto you. Let not your heart be troubled, neither let it be afraid. And now, as the time for His departure had finally arrived He once again prayed for the peace of God to flood their hearts - the peace that passes understanding - the peace that is the birthright of those that are His blood-bought children.

Jesus came as the Messiah of the Jews and the King of Israel. But He also came as the Passover Lamb for His people Israel and the God-ordained sacrifice for the sin of the whole world. But His life was also lived in order to set an example to His followers of How to live a life that is pleasing to the Lord.. HOW to become a living sacrifice to the glory of God.. HOW to worship the Lord in spirit and truth - first the CROSS and then the CROWN.

The Lord Jesus came as a servant, who emptied Himself of everything so that He did only those things that His Father willed. Jesus delighted to do His Father's will and demonstrated how to please the Father by the life that He lived - in order that those who were to become His witnesses would know HOW to live to the glory of God in a Christ-rejecting, God-hating sinful world - the CROSS before the CROWN - the night of suffering before the morning of joy.

As so, as the time for His departure drew ever closer, Jesus said to them once again, 'Peace be with you; as the Father has sent Me, I also send you.' In the same way that Jesus was sent by His Father to preach the gospel of God to a lost and dying world.. so we also are sent by Jesus to preach the gospel of Christ to a lost and dying world - that whosoever believes in Him would not perish but have everlasting life - but never forget.. that for all who take up this challenge it is first the CROSS and then the CROWN.

Heavenly Father, thank You that I have peace with God by grace through faith in Christ's finished work and thank You that in Him I have the peace of God to guard my heart and mind in the midst of a perverse and crooked generation. Thank You that I have Your peace reigning in my heart and I pray that I may be a faithful witness to the truth of the gloroius gospel of Christ - knowing that the Christian life is not easy but joy comes in the morning, in Jesus name I pray, AMEN

Choose a Verse from John 20 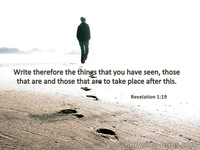 Revelation 1:19
Mutual Viewpoint
He Understands He Cares (Woman At The Well (3)
All Sufficient Grace