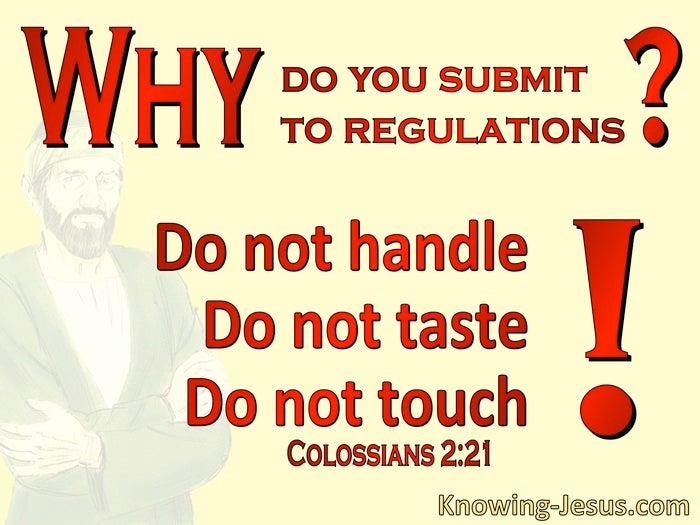 The enemy of our soul seeks to ship-wreck the life and testimony of believers by whatever means he can, and Paul's counter-measure to satanic influences, worldly philosophers, deceptive arguments and false doctrines is to know and practice the truth. We are called to be aware of the multiplicity of unbiblical teachings and demonic doctrines, awash in Christendom today, but the best way to discern a lie is to know the truth. The best way to identify false doctrine or a Christian cult is to study the Word of God so you know the truth and the truth will set you free.

In this chapter Paul identifies various unbiblical ideologies. He warns of gnosticism where the deity of Christ is denied. He identifies legalism which add works of the law to Christ's finished work of Calvary. He touches on mysticism, with its emphasis on dreams, visions, feelings and one's personal experience of the spiritual realm rather than on Christ and in this verse Paul cautions against asceticism, where holiness is acquired through severe self-discipline; self-denial; the renunciation of pleasures or austere religiosity rather than through faith in Christ.

Colossians 2:21 warns of the dangers of asceticism, which is a mixture of legalism and mysticism. He is warning Christians of becoming enslaved by man-made rules. He urges these believers not to impose worldly rites, rituals and regulations upon themselves, when their position in Christ has set them free from the curse of the Law. But when this verse is taken in isolation, it promotes the opposite of Paul's teaching, for we read - "Do not handle, do not taste, do not touch!".

In reality, Paul is condemning those that teach Christians - do not handle or taste or touch certain things, because this is religiosity. This is the way of the world. Paul pleads with his readers, "if you have died with Christ to the elementary principles of the world, (i.e. by trusting Christ for salvation), why, as if you were living in the world, do you submit yourself to decrees, such as, "Do not handle, do not taste, do not touch!" If you have died with Christ - you are freed from the curse of the Law.

Even though we may not know the exact activities Paul was talking about or the religious rituals to which he was referring, we can clearly see that following any ascetic practices of the world, in whichever generation we live, is contrary to the teachings of the Bible, and should be shunned.

Whether Paul was referring to certain ceremonial activities connected with the Mosaic Law, the intellectual arguments of the educated Greeks or the pagan practices of the surrounding idolatrous nations, he points out that participation in these activities, will destroy those who use them because they are under the precepts, practices and doctrines of men, which line up with the satanic influences, ingrained in worldly philosophies, deceptive arguments and false doctrines - and are not of God.

We need not study the finer details of gnosticism, legalism, mysticism, asceticism or any other false teaching or demonic doctrine to identify error, but we do need to study the word of God, which points to the Person and work of CHRIST, so that we know the truth - and the truth will set us free.

Heavenly Father, thank You that I have all that I need for life and godliness in the Scriptures. Thank You that a knowledge of Your word will help me recognise false teachings or unbiblical doctrines. Keep me alert to the wiles of the enemy of my soul, who seeks to shipwreck my testimony and destroy my opportunity to serve You in spirit and truth. Thank You that in Christ I have died to the elementary principles of this world and am free from the curse of law and thank You that I never again need to submit myself to any decrees of this world. Help me walk, day by day in spirit and truth, for Your praise and glory, this I ask in Jesus' name, AMEN. 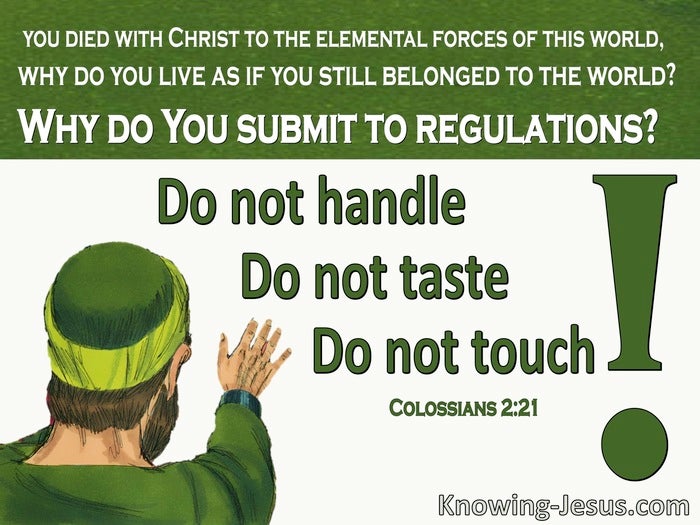 Choose a Verse from Colossians 2