"Speak to the sons of Israel and say to them, 'When any man of you brings an offering to the LORD, you shall bring your offering of animals from the herd or the flock. 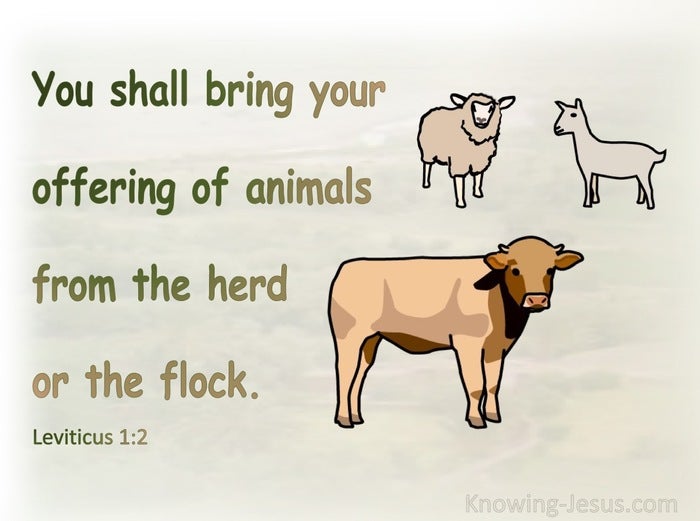 Leviticus is the third book of Moses. It is a continuation from his writings in Exodus, which follows on, chronologically from the book of Genesis. While Genesis takes us from the beginning of creation to the call of Abraham and his migration to Egypt because of a worldwide famine, and Exodus relays Israel's escape from slavery, the giving of the Law, and their wilderness wanderings, Leviticus is the book that outlines the Feasts of the Lord, the Levitical priesthood, and the various sacrificial offering and requirements of the Mosaic Law. But like all books of the Bible, they all point us to the Lord Jesus.

Exodus finishes with the construction of the Tabernacle and the glory of the Lord descending onto the Tent of Meeting. "Then", we read in the opening verse of Leviticus, "THEN the Lord summoned Moses and spoke to him from the Tent of Meeting." Once the Tabernacle was completed and the glory of the Lord rested thereon, we turn the page to Leviticus, where Moses is summoned by God, and instructed to, "Speak to the Israelites and tell them, 'When any of you brings an offering to the Lord from the livestock, you may bring your offering from the herd or the flock.'"

Early in their wilderness wanderings, the Lord made a covenant with Israel, who promised to do ALL He commanded them. They were chosen to be the people of God, through Whom He would bring salvation to a lost and dying world. They were to be a holy people, who were separated from the world and consecrated to God. They were not to follow after the practices of their pagan neighbours, but to be recognised as a peculiar people, who trusted in the true and living God. Once the Tabernacle had been completed in Exodus, the Israelites were given instructions, in Leviticus, on offering sacrifices that were acceptable to the Lord.

In Old Testament times, sacrificial offerings provided sinful man access to a holy God. They were practiced by Noah, Abraham, and other holy men of God, and became an integral part of Israel's ceremonial and civil laws. From the beginning, thank-offerings were made to worship God and return fallen man into fellowship with Him. But through Moses, the Lord introduced specific sacrificial offerings and special feasts days to teach His people, certain lessons and to point them to the promised SEED, Who would come to crush the serpent's head - and through Whom all the families of the earth would be blessed.

There were three voluntary and two compulsory sacrifices given to Israel, and while certain sacrifices were bloodless offerings, most feast days and sacrificial offerings necessitated the shedding of innocent blood. A short, limited list of clean, domesticated animals, was used as sacrifices. They were to be chosen from the herd, or the flock. They were to be either cows and oxen from their herds, or sheep and goats from their flocks. In addition, only animals that were free from physical blemishes could be selected as a sacrificial offering.

Bringing a sacrifice from their own livestock, showed there was a real and personal cost to their offering. The people had to be taught that God is worthy of all praise and that sin cannot go unpunished. These sacrifices taught that sin and defilement causes a barrier to be raised between a holy God and sinful man, which can only be removed, (or atoned for), with the shed blood of a sacrifice, stipulated by God.

The sacrificial offerings and feast days were introduced to Israel, to prepare the heart of man to participate in holy worship. They were to develop a godly attitude of heart and spiritual preparedness. Participation in any sacrificial service was designed to be an outward display of the repentant, inner man. The outward action of each man was meant to reflect an inner change of a heart, that glorifies God but grieves over their sin.

Bringing offerings to the Lord in the times of Moses, promoted personal responsibility and accountability to God. It was the outward participation in a ceremony that praised God for His greatness, or petitioned Him for the forgiveness of trespasses and sin. Personal offerings to God and national sacrifices for sin kept the need to be holy to the Lord, at the forefront of Israel's collective mind. Every sacrifice became a pointer to Christ and a reminder of the need for redemption and righteousness.

We in the Church do not have to engage in sacrificial offerings or participate in Israel's feast days to please the Lord or fulfil His Word. We do not have to offer a burnt offering in order to praise God or provide a sin offering to cover our trespasses. It is not selecting a sacrifice from the herd or the flock that restores fellowship with God, or grants access into the throne-room of God. However, we have principles and practices that are laid out in the New Testament for the remission of our sin, that will restore us into fellowship, when we sin or disobey His Word.

We do not have to select a sacrificial animal from our own flocks or herds, and have its blood spilled to obey the Word of the Lord and honour His name. However, we have no less a responsibility to the Lord, Who made us and died for us. We are equally accountable to Him, for He not only created us but has purchased us with the precious shed blood of His dear Son. Not only did the shed blood of Christ bring forgiveness of sin and life everlasting, but returns us into fellowship with the Father, when we confess our wrongdoing - for He is our Mediator and great High Priest, Who intercedes between man and God.

In this Dispensation of Grace, may we be ready and willing to apply the principles and practices that are laid out in Scripture for our learning, and learn all that God would teach us in the whole counsel of Scripture, for ALL Scripture points to Christ. May we offer ourselves as a living sacrifice, holy and acceptable to the Lord.

Heavenly Father, thank You that I am not bound by the Mosaic Law. Thank You that I do not have to offer sacrifices from the herd or shed blood from the flock to honour Your name. Thank You that I do not have to offer an animal, to be returned into fellowship when I sin and fail You. May my sacrifice of a broken, contrite heart, and a consecrated life, honour Your name and be acceptable in Your sight. Thank You that through the shed blood of Christ, I am forgiven of my sin and have access into the throne-room of Your presence, every moment of the day and night. Thank You that in Him I have mercy to find help in time of need. Help me to obey Your Word and adhere to the principles and practices laid out in Scripture for Christians, and learn lessons from those given to Israel. This I ask in Jesus' name, AMEN. 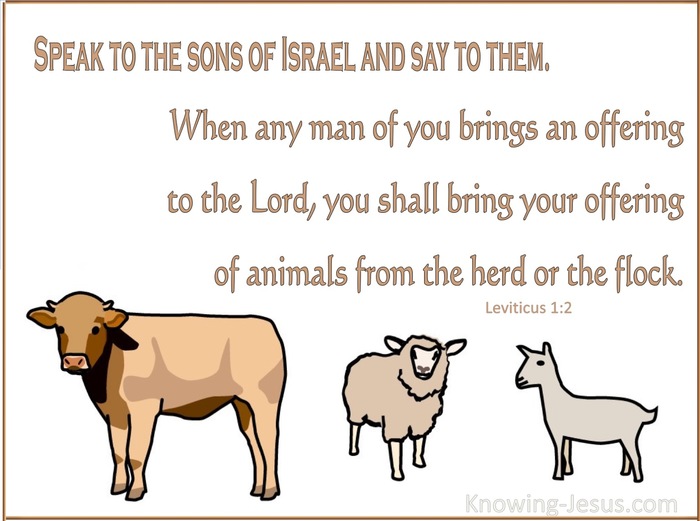 Choose a Verse from Leviticus 1