"These things I have spoken to you, so that in Me you may have peace In the world you have tribulation, but take courage; I have overcome the world." 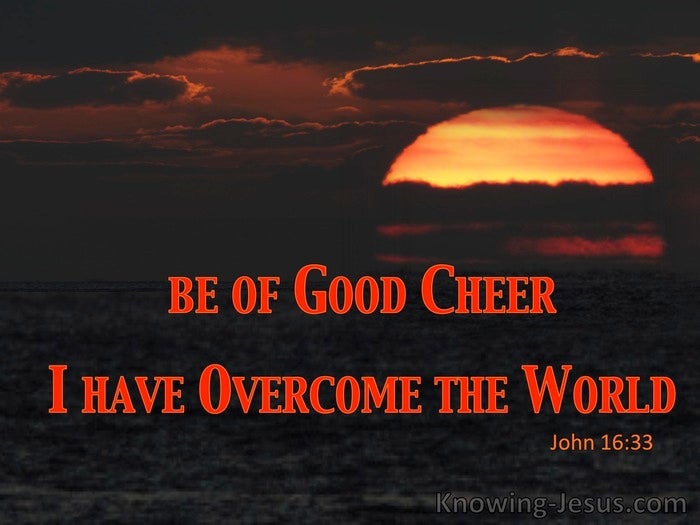 So often the comforting statements of the Lord Jesus are designed to link a wonderful promise of God to deep concerns that may surface within the heart and mind of believers, as we journey through life, in an increasingly alien world. This was true for the disciples too. As the shadow of the cross grew closer, Christ's little company of disciples became fearful of the antagonistic attitude of the religious leaders towards Jesus, which grew stronger as Calvary loomed ever closer.

But in His farewell discourse, Jesus took time to reassure His frightened little flock that His perfect peace would flood their heart and mind, if they would trust the words He had spoken to them and believe the things He had taught them. They had to know that in this fallen world system they would also have tribulation. People would be antagonistic towards them too, just as they were towards the Lord Jesus. "But take courage," He said, "I have overcome the world."

The loving Lord of eternity never deserts the feeble cries of His children, who call out to Him day and night. He understands the fears we face and the doubts that flood our minds, when all that is seemingly safe, secure, and stable is flung into disarray and deep disorder. "I have told you these things," were his reassuring words to His little band of followers, "so that when the hour comes, you will remember what I told you. I didn't need to tell you at the beginning, because I was with you"

His promise of peace is given to those who hear and believe His Word. His blessed peace rests in the heart of all that abide in His love. The Lord offers us His perfect peace which can be found IN HIM. "Let not your heart be troubled. You believe in God (GOOD!) Believe also in Me."

We find His peace as we look to Him. We gain His peace as we trust His Word. We discover His peace as we believe His promises and take them to heart. "these things I have spoken to you so that IN ME, you may have peace." We are POSITIONALLY in Christ through faith but we must also be PRACTICALLY in Christ, moment by moment. Never will we gain that peace which passes understanding unless we are in Him, in fellowship with Him, in sweet communion with Him, resting in the promises He has taught us in His Word.

It is as we rest in Him and abide in His love that the peace of God, which passes human comprehension, will flood our hearts and quiet our minds. The incarnate WORD of God, gave us a very clear message that He has gained the victory over Satan and this world system. He gave us a peep into the wonderful things that God has prepared for those that love Him.

The Incarnate Word, gave a Spoken Word which is recorded in the Written Word. The comforting words of Jesus were given for a reason, to sustain us in times of doubt, to strengthen us in times of weakness, to support us in times of suffering, to light up this gloomy world in times of darkness and to raise us up when we falter and fall.

Before He was led to Pilate and crucified on a wooden cross, the Lord Jesus was able to make the most astounding claim. "I have overcome the world." Jesus not only overcame sin by living a sinless life, He overcame sin on behalf of ALL who would trust in His sacrificial offering on the cross. Jesus not only overcame death when He rose from the dead, He overcame death on behalf of ALL who have been born from above and are clothed in His righteousness. Because HE overcame, we too are overcomers through faith in Him.

These words were spoken to warn of the many tribulations and trials that inevitably stalk the paths of all God's blood-bought children, and to encourage each child of God, knowing that Christ has won the victory on our account, so that no matter what may happen, we are safe in the arms of Jesus.

But they were also to proclaim the greatest truth that could fall on the ears of dying, sinful humanity. I have triumphed over everything that could cause you pain and distress. In Me you will have the peace that passes human understanding. "In this world, you will have tribulation, but be of good cheer, for I have overcome the world."

Thank You, Father, for Your wonderful words of comfort and peace. I pray that in all the trials and tribulations of life, which seem to be mounting with each passing day, that my heart and my mind will rest in Jesus so that His perfect peace will carry me through all life's difficulties, to Your praise and glory. In Jesus' name I pray, AMEN. 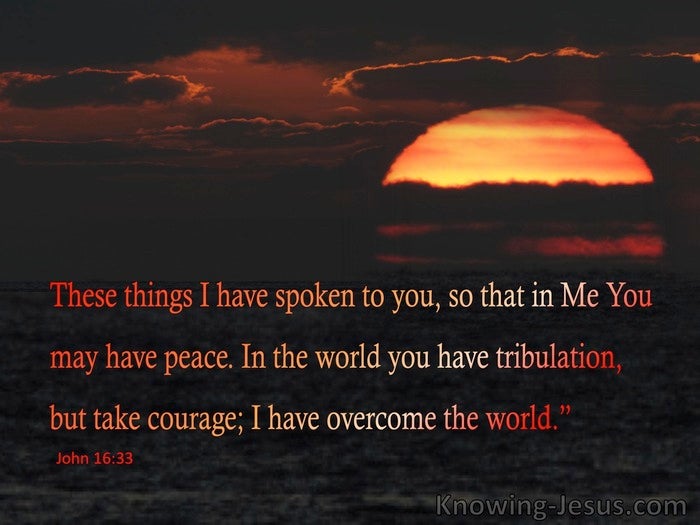 Choose a Verse from John 16 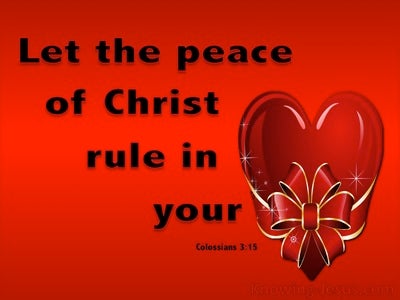 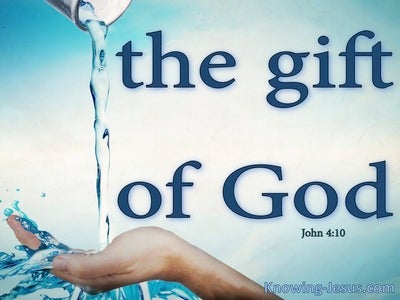