And you brethren, like Isaac, are children of promise. 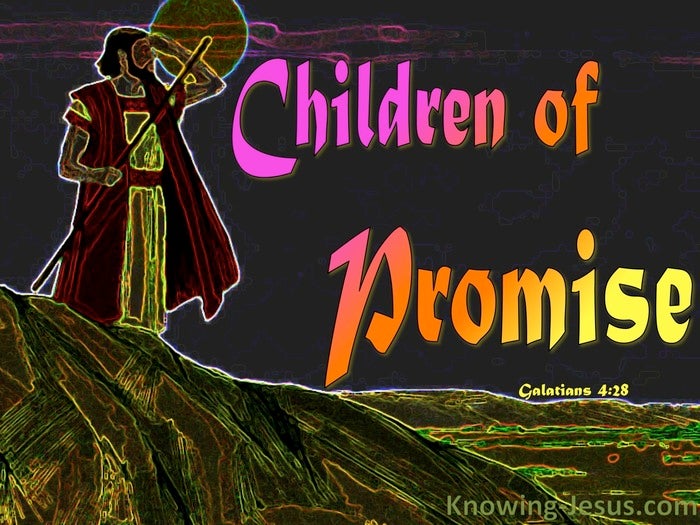 Paul wrote his epistle to the Galatians in order to help the Judaisers and the legalists of his day understand the difference between the freedom we have in Christ... and the restrictive bondage to sin, which comes from the Law. Paul aimed to differentiate between believers who are set free from bondage to the Law by faith in Christ, and believers who are legalistic and remain enslaved to sin and bound by works of the flesh to the Mosaic Law.

He wanted to demonstrate the great gulf that there is between the freedom we receive, by grace through faith in Christ, and the stifling subjugation that comes from trying to keep the Law. He desires to warn us against following another 'gospel' and believing in a different 'Jesus'.

Paul took the historic figures of Isaac and Ishmael, the two sons of the great patriarch Abraham, and used these two characters to symbolically illustrate the great difference between the Christian’s supernatural freedom in Christ and legalistic bondage to sin and the Law. Isaac was used as an illustration of a spiritual believer who is freed from the demands of the Law, while Ishmael was used to illustrate a believer who walks in fleshly carnality.

Isaac was the supernaturally born 'child of promise' who was the son of Abraham and his freeborn wife, Sarah... in fulfilment of God's covenant promise with Abraham and his Seed (the Lord Jesus Christ). God promised that through Isaac, the Messiah would be born - the promised 'Seed' through Whom the promises God made to Abraham would finally be fulfilled. The promised Seed would come through Abraham, through Isaac, through Jacob - and through the nation of Israel.

Ishmael however, was the natural-born child of the flesh. He was born to Abraham and Hagar, the slave-woman. Ishmael was born in fulfilment of human choice and not the result of God's promise to Abraham. And although he was blessed in many ways,  Ishmael was not the heir of promise. He was not the one through whom the promised Seed would be born. Paul therefore symbolically linked Ishmael, the child of slavery, with the Old Covenant. The Old Covenant was the Law of Moses, cut on mount Sinai. Christians are not heirs of the Old Covenant.

Paul wanted to show that being a descendent of Abraham does not make automatically make you an heir or a child of promise. You only become an heir of God and child of promise by faith. You can only be declared righteous by faith and not by legalistically keeping the Law of Moses. Those that are children of the flesh and enslaved by the Law, are not children of promise. The bondwoman and her son were cast out, which foreshadowed the replacement of the Old Covenant with the New Covenant - where the law of sin and death is replaced with the Law of the Spirit of life in Christ Jesus.

Paul was urging the Galatian believers to exercise their freedom in Christ by living under the New Covenant. They did not need to be bound by the Old Covenant and should not legalistically try to keep all the laws and rituals of the past.

This allegory takes the literal, historical context of the lives of Isaac and Ishmael, and uses it to produce an inter-textual understanding of the Scriptures. It beautifully demonstrates the freedom Christians have in Christ, because we are free-born children of God, and like Isaac, have become children of promise.

Heavenly Father, thank You for the beautiful, real-life story of Abraham and the allegory that Paul used to demonstrate the freedom we have in Christ by faith and the bondage we retain when we seek to live our Christian life according to the works of the flesh - or by following the Law. Thank You that in Christ I am a child of promise, having been supernaturally born again by the Spirit. May I jealously guard my freedom in Christ and not be enticed into the legalistic practices that place us back under bondage to the Law. This I ask in Jesus' name, AMEN. 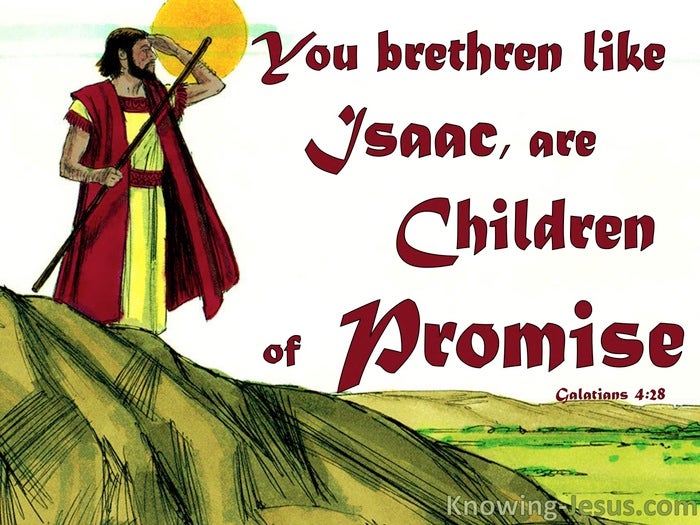 Choose a Verse from Galatians 4 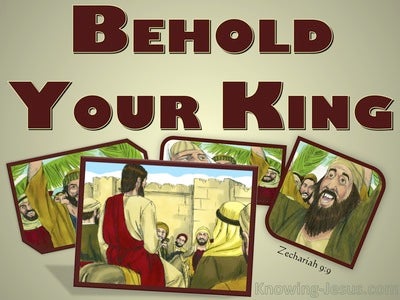