Then he said to Him, "If Your presence does not go with us, do not lead us up from here. 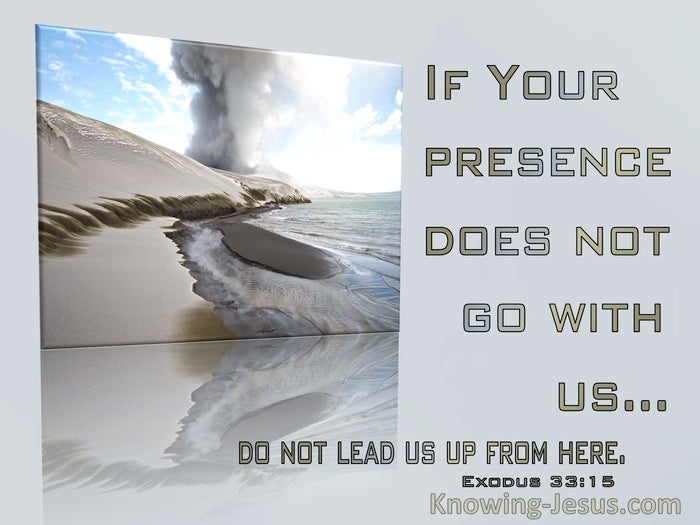 The book of Exodus continues the narrative from Genesis, when Jospeh was put in a coffin in Egypt. It guides us through the call of Moses; his confrontation with Pharoah and the 10 terrible plagues of Egypt. We read of the death of the first-born on Passover and the crossing of the Red Sea... and we are given insight into various wilderness exploits.

We hear of the covenant the Lord made with Israel and their incessant murmurings and disobedience. We read of the giving of the Law of Moses and receive detail of the Tabernacle construction and its many furnishings. We gain an understanding of the Priesthood; their consecration and priestly duties together with the 10 commandments and the many other laws regarding slaves; personal injury; health; food; stealing; dishonesty; seduction; religious requirements; and a wide range of interconnected and indivisible rules; regulations; rites and rituals - ALL of which, we discover, point to Christ.

Every aspect of the exodus from Egypt is covered in detail, but in chapter 32 we read of God refusing to accompany His errant people any further because disobedient Israel had broken their covenant and fell into shocking idolatry, by building a golden calf. This terrible incident resulted in 3000 of their company being slain and a distraught Moses desperately trying to make atonement for the nation's gross idolatry.

It is as we reach chapter 33 that we find the people repenting of their unbelief and Moses, on his face, before the Lord, in the Tent of Meeting, pleading for forgiveness and praying that the Lord would still accompany them, and that His Presence would continue to go with them. Moses could not bear the thought of separation from the Lord and beseeched Him... "If Your presence does not go with us, do not lead us up from here". Moses would rather die in the wilderness than to go on without the Lord.

Moses was prepared to atone for the people - by offering to die, as the purchase price for God's sinful nation. But there is no one good enough to pay the price for sin, and it was necessary for God to punish His disobedient nation by sending a terrible plague. Only the shed blood of an innocent Man - a kinsman-redeemer, could become the sacrifice for sin.

It is as we read through the book of Exodus, we begin understanding that every minute detail of Israel's escape from Egypt is pointing us to Christ. From their wilderness wandering and the giving of the Law to the construction of the Tabernacle; the Feasts of the Lord; the Levitical Priesthood and the bronze serpent that was raised up to halt the plague - all point to Jesus.

Moses could not consider continuing without God's Presence accompanying them, He knew that without the Lord the nations would soon be destroyed, and reminded Him of His many precious promises to bring them out of Egypt, guide them through the wilderness and bring them into the Promised Land. Moses no doubt recalled the anticipation they felt as the angel of death passed over the blood-stained lintels of their homes on Passover night and the intense joy they expressed, as they rejoiced on the far side of the Red Sea, having witnessed their enemies being swept beneath the raging waters.

The word of the Lord is sure and stands fast for ever and ever and Moses reminded the Lord of His promises to be with them and appealed on the basis God's grace. Just like Noah, before him, Moses also found grace in the eyes of the Lord - and that same grace is extended to ALL who will believe in His Word and trust in Christ for the forgiveness of sin and life everlasting - for "LO, I am with you even to the end of the age." 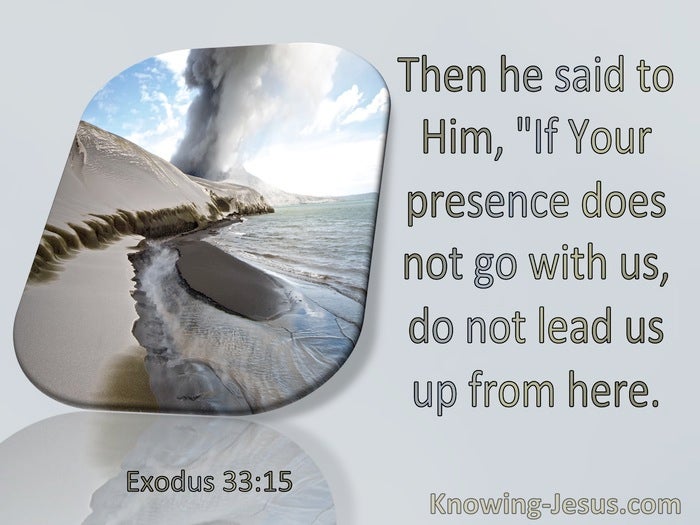 Choose a Verse from Exodus 33