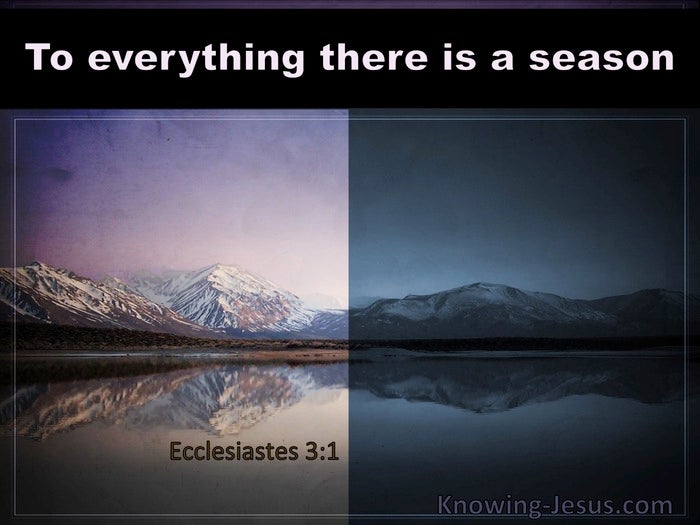 So many verses in scripture come back to the foundational truth that God knows best and wants us to trust Him in all things and at all times. He made the world and governs the universe, and is never phased nor astonished at what is going on in the world at large, nor the troubling circumstances that are happening in the individual lives of His children.

Times and seasons have been foreordained by God. He even knows the number of hairs on our heads and the Lord our God has scheduled each day of our lives. So often, we think that we know what would be best for ourselves and humanity at large, and our own perceived ideas are often reflected in our prayers... and yet the desires of our heart and our urgent pleadings to the Lord, too often conflict with God's wider will for our lives and His greater desire and destiny for us.

This verse is a simple, yet timely reminder, that we are to live by faith in the Word of Truth, and to trust God's judgement in all things, for He sends blessings on the just and unjust alike, and He takes the foolish schemes and rebellious actions of men and turns them to His greater glory, in order to fulfil His ultimate plan and purpose, which is that Christ is all in all.

It was King Solomon who made the observation that God has established specific times and predetermined seasons, which influence the affairs of our own individual lives and affects everything that takes place, down through the annals of history.

This cyclical pattern was set in motion by God Himself, when He spoke the world into being. It was then, that in His wisdom He put in motion a series of unchangeable, natural laws, which were determined by Him and which have an impact on every area of our own lives, as well as the wider world and universe.

In the beginning, the Lord said, "Let there be lights in the expanse of the heavens to separate the day from the night." He placed the sun and the moon in the firmament of heaven, for signs and for seasons and for days and years. He called them into being, to govern the day, and to govern the night.

When God called Israel out of Egypt to be His people, He also set some appointed times and seasons for them, together with feast days and sabbath days. He ordered holy convocations on which to present offerings by fire to the Lord. Burnt offerings and grain offerings, sacrifices and drink offerings, each at certain appointed times.

However, in his personal reflections and extensive research Solomon came to recognise the futility of life without God, and this wisest of all kings, whose understanding and wisdom surpasses all others, finally reached his ultimate conclusion, which contains prudent counsel for every-man, "fear God, and keep His commandments, for this is the whole duty of man."

Thank You, Father, that You know the end from the beginning and that everything under heaven is within Your authority. Thank You, that You are in control of all that is happening in my own individual life and the wider world in general. May I trust You through all the circumstances of life and as I seek Your face in prayer and praise, may I learn more and more to pray, "Thy will be done in my life and throughout the world." In Jesus' name I pray, AMEN. 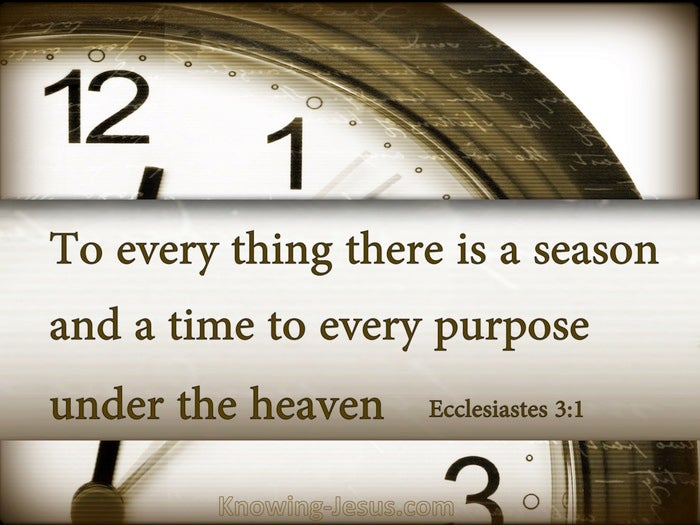 Choose a Verse from Ecclesiastes 3 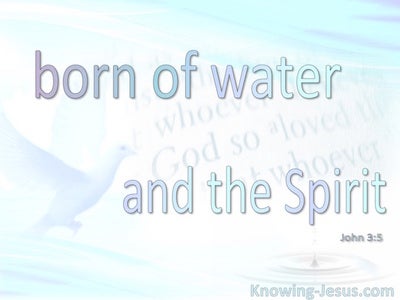