Consider what I say, for the Lord will give you understanding in everything. 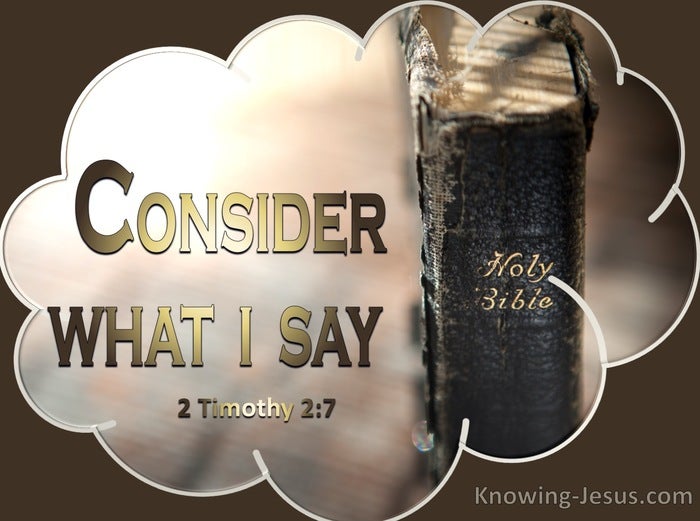 In Paul's final epistle, before his death, he wrote to Timothy urging him to be strong in the Lord, to live godly in Christ Jesus and to hold fast to the faith. He encouraged this young pastor to "endure life's hardships, like a good soldier of Jesus Christ," and not get "entangled in life's pressures".

Timothy was encouraged to run the race of life like a top athlete - pressing on to the finishing mark, and Paul pointed out that to triumph in the race of life and to win the victor's crown he must complete the race according to the rules. Paul also encouraged Timothy to be like a hard-working farmer reminding him that... as a diligent husbandman, he would be the first to benefit from the hard work of planting his crops, nurturing the tender shoots, and harvesting the produce.

Paul was writing his letter from a prison cell in Rome and knew that his own time on earth was soon to end. Paul knew that after his departure, Timothy would be one that would need to pick up the gospel-baton of truth and to preach the Word, in season and out of season, and so he exhorted Timothy to press on to his high calling in Christ Jesus, and to consider carefully all that Paul had taught him. "Consider what I say", Paul cautioned his young protégé, "for the Lord will give you understanding in everything," he promised

These three illustrations of godly living:- the soldier in the battlefield, the athlete in the race, and the farmer in his endeavours, pictured those with great perseverance, strength of character, and a determination to keep on keeping on in the midst of great personal challenges and life's inevitable hardships.

Should the soldier surrender to his enemy, the battle would never be won. Should the athlete be tempted to stop running... the race would certainly be lost, and if a farmer ceased from his labours, the crops would cease to grow. And Timothy was encouraged to consider carefully all that Paul had taught him. He was to trust that the Lord would lead and guide him into all truth and equip him with deeper understanding. He was to trust in the Lord to sustain him in all his endeavours and to finish the good work He had started in Timothy's life.

Paul was able to say with confidence. "I have fought a good fight, I have finished my course, I have kept the faith", and his dear desire was that Timothy,  his young 'son in the faith' - and all who are saved by grace through faith in the Lord Jesus, would follow his example and finish the race well... looking to Jesus and giving honour to the Lord.

Paul wanted Timothy (and us) to understand the importance of perseverance in the face of deep difficulties and patient endurance when beset by those that are hostile toward him or questioned his authority. God is faithful to save us, to keep us, and to give us understanding in all things. And if the Lord has been faithful to His people in the past, we can be assured that He will continue to be faithful to His promises in the future. We have been given all we need for life and godliness and we need to be ready to appropriate ALL that is ours in Christ.

We are not to rely on our own limited knowledge and human understanding. We are not to depend on our own sufficiency. Rather, we are to die to sin and self and life for Christ alone. We are to set our affections on things above and not on things of the earth - we are to trust in His sufficiency - for He has promised "MY grace is sufficient for My strength is perfected in your weakness".

We are to know and understand the significance of being identified with Christ.. in both His death and His resurrection if we are to live the consecrated life that Paul promoted and to which Timothy was called. After we are alive from the dead, walking in spirit and truth, and have appropriated the privileges that are ours in Christ, we can be given the spiritual understanding about which Paul is speaking.

May we never forget that the Spirit of God Who raised Christ from the dead is the same Holy Spirit Who will also bring our mortal bodies to life,  and empower us to endure life's hardships, like a good soldier of Jesus Christ; to run the race of life like a top athlete - and to be like a hard-working farmer who reaps the rewards of his fruitful harvest.

Let us all consider everything that Paul taught Timothy, his 'son in the faith', so that we may also be brought into a deeper understand of our Lord and Saviour and all that He has done for us.

Heavenly Father, thank You for the Word of God and the truths that it contains within its sacred pages. Help me to read, mark, learn, and consider  carefully all the things that Christ has done for me, so that I may live my life in a manner that pleases You and honours You holy name. I pray that I may endure life's hardships like a good soldier of Christ and run with patience the race of life that is set before me. Keep me pressing on the goal of my calling and equip me with knowledge and understanding of all that Christ has done for me - this I ask in Jesus' name, AMEN. 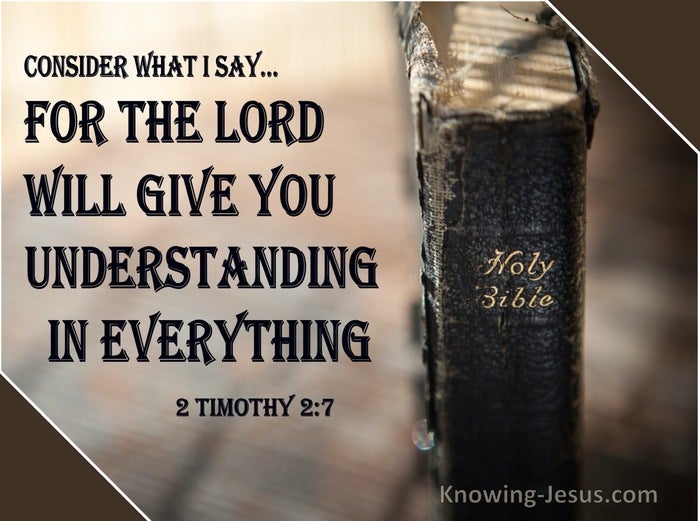 Choose a Verse from 2 Timothy 2