for which I was appointed a preacher and an apostle and a teacher. 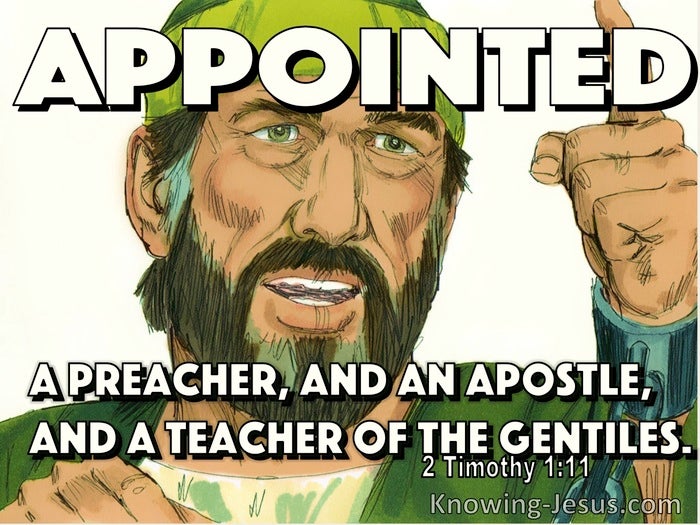 During his lifetime Paul had to face much personal criticism and significant hostility towards his message and his ministry, but he was not ashamed of the gospel, because he knew the gospel of Christ was the power of God for salvation to everyone who believes, and it was Paul's deep desire to encourage Timothy to reflect this same fervour, and not to allow critics to discourage him in his own pastoral ministry.

Timothy was a young pastor who needed the encouragement of the older man, to remain loyal to the faith and to hold fast to the sound pattern of teaching he had received from Paul. He was not suggesting that Timothy be belligerent or hostile in his defence of the gospel, but that he was not intimidated by his critics and detractors, nor disheartened by those who feigned friendship at first, but eventually turned away from him.

The older apostle reminded the young pastor that he had experienced people betraying him, turning on him, and rejecting him. He even mentioned Phygelus and Hermogenes by name, in order to embolden Timothy to stand firm in the faith and preach the gospel with authority, and not to become anxious about his critics' influence. Just as Paul had been appointed by God to be a herald, an apostle, an author of Scripture, and a teacher of the gospel, so also Timothy had been gifted by the Holy Spirit as a Pastor-Teacher.

Paul told Timothy not to be ashamed of the gospel nor to be afraid to testify about our Lord Jesus, adding, "and don't be ashamed of ME, Christ's prisoner!" Paul had been imprisoned many times for the sake of the gospel and considered it an honour to suffer for the sake of his Saviour, while relying on God's sufficient strength to bring him through victory. "It was for this gospel I was appointed a herald, apostle, and teacher," Paul reminded Timothy, as he urged him to imitate his way.

No doubt Timothy had often heard Paul's thrilling, life-changing experience on the road to Damascus, when he was apprehended by a vision of the risen, glorified Jesus of Nazareth. Paul had been called and chosen as Christ's apostle to the Gentiles and had been shown how much he would have to suffer for His sake. Naturally, Paul wanted Timothy to adopt the same attitude towards sharing the gospel as he himself, and felt it necessary to remind him that it was for the GOSPEL for which he was appointed as a preacher, an apostle, and a teacher. "Woe to me if I do not proclaim the gospel of Christ."

Paul reminded Timothy that he was not ashamed of the gospel even when assailed by critics and enemies, because he knew the One in Whom he had believed. Paul knew the Lord Jesus personally and was persuaded that He was able to guard ALL that had been entrusted to Him until that day when Christ comes to take us to be with Himself. What a wonderful day that will be.

Every one of Christ's blood-bought children has important work to do during their life in this dispensation of grace. We may not have experienced the type of vision Paul had on the road to Emmaus and we may not be a pastor-teacher like Timothy, but we all have received the same great salvation - the forgiveness of sin and life everlasting, and we all have work to do in the power of the Holy Spirit.

Every one of us can develop and maintain the same personal relationship with the Lord Jesus as we walk in spirit and truth, grow in grace, and mature in the faith. May we never be ashamed of the gospel of Christ knowing that it is salvation for ALL who believe, and may we carry out the good work that God has appointed each of us to do for His greater praise and glory.

Heavenly Father, thank You for the good news of the gospel and the wonderful testimony we have of Jesus Christ, our God and Saviour. May I be ready and willing to suffer for the sake of the gospel and rely on Your power to keep and sustain me in the midst of my critics and those that hate me for Christ's sake. Help me to fulfil the work that You have prepared for me to do and may I glory in the Cross of Christ, and look forward to the day when You come to take us to be with Yourself. Thank You in Jesus' name, AMEN. 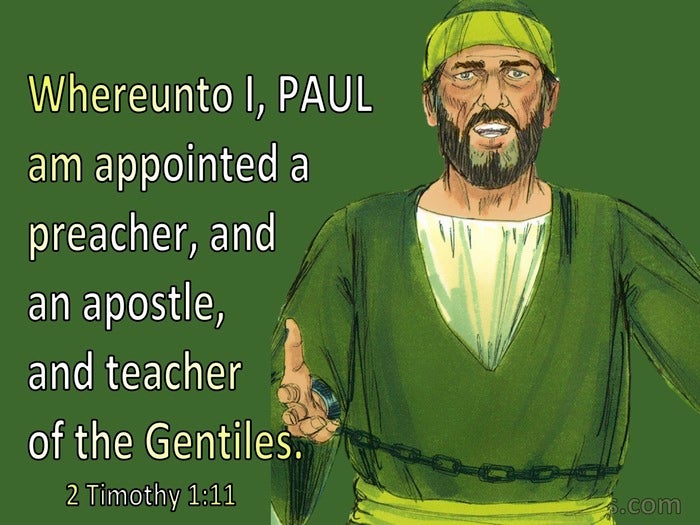 Choose a Verse from 2 Timothy 1