But since we are of the day, let us be sober, having put on the breastplate of faith and love, and as a helmet, the hope of salvation. 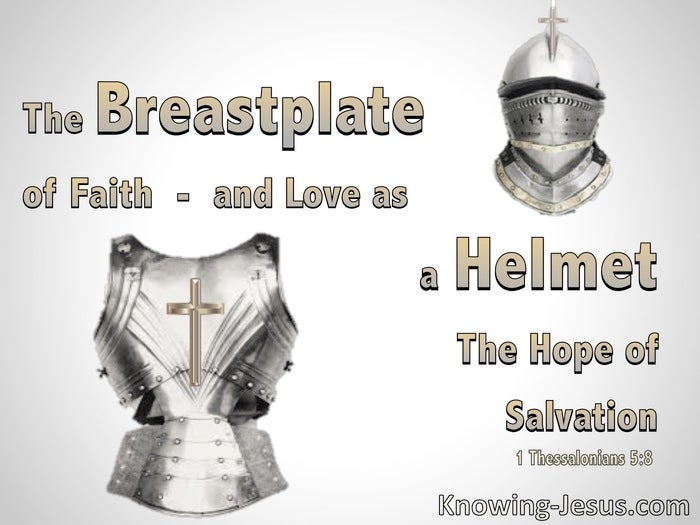 Both the Corinthians and Thessalonians Christians received some important, and complimentary teaching on the rapture and the resurrection. The Corinthians received detailed facts on the resurrection of the body and our future, immortal state, while in Thessalonians we are given encouraging revelation about the end times, and the moment when we, who are alive and remain, will be caught up in the clouds with the resurrected saints - to be with the Lord, forevermore.

Paul is keen to show the difference between US and THEM - between Christians and unbelievers, between those that are saved by grace through faith in Christ, and unregenerate men and women. WE are of the day and WE are sons of light, Paul reminds us,. WE are not in darkness like the unbeliever or the unregenerate soul.. WE have been given advanced noticed of what to expect, and WE have believed in the revelation of Jesus Christ, through the wonderful, Word of God.

Being children of God we have inside information about the things that will take place in the near future, as the time for Christ's return draws ever closer. We have Scripture as our compass, for we have received a more sure word of prophecy.. and as such we should be well-equipped to recognize the signs of the times in which we live, as we look for the any-day return of Christ - coming in the clouds for His Church.

The 'Day of the Lord', which is sometimes called the '70th Week of Daniel' or the 'Time of Jacob's Trouble', is going to come upon the earth suddenly. THEY will not be expecting it, and will be calling for 'Peace and Safety' or enjoying a bogus type of security - but destruction will suddenly come upon them, and they will not escape - for it has been prophesied that God's wrath will finally be poured out on this Christ-rejecting, sin-infected world.

Man rejected the sovereignty of God and for 6000 years He has permitted MAN to try to rule the world man's way. Israel also rejected a theocracy with God as their King, in the Old Testament, and in the new, they would not have Christ rule over them as their Messiah-King. For six millennia, man has tried to govern his own destiny, but the 'Day of Man' will soon be over, and the 'Day of the Lord' is about to begin. And WE are not in darkness that this Day should overtake us as a thief in the night - for WE are children of the Day and sons of Light!

WE are not appointed to wrath. WE will be saved out of the wrath to come. THEY are children of the night, whose minds are darkened. THEY do not have the enlightenment that we are afforded, for they have not believed on the only begotten Son of God, and remain condemned.

The 'Day of the Lord' will not overtake us like a thief, nor will it come unexpectedly upon us, for we are informed Christians. We are children of the Day and sons of Light. We are positioned in Christ, and are partakers of His righteousness - and we have the mind of Christ. There is no condemnation on those that are in Christ Jesus - God's wrath fell on Him at Calvary, in place of us, and we are no longer under the wrath of God, but have received the citizenship of heaven - by faith.

Because we are no longer under wrath, and have become children of the day, we have certain responsibilities. We are to be sober in our acts and outlook. We are not to participate in the foolish trivialities of this world system, which is soon to be overthrown. We are to be circumspect in in our behaviour, wise in the words we say and gracious in actions we carry out. And we have the Word of God to show us the way, and to guide us into all truth.

We have already put on the breastplate of faith and love, by trusting Christ as Saviour.. and as a helmet, to protect our thoughts and mind, we have the hope of salvation. Faith, Love and Hope are three of the most important elements, that are ours in Christ. Faith in our heavenly Father and love for His beloved Son, is our eternal protection, both inwardly and outwardly, while the blessed hope we have in our salvation, will guard our minds from the wiles of the evil one - who would seek to flood us with fear, ship-wreck our mission and ministry, and destroy our testimony, through worry of what is coming on the world.

We received justification when we were born again and we have the promise of the resurrection, rapture and a glorified body, in the days to come.. but we have God's assurance that we have salvation from the wrath to come. We have been saved from the coming judgement.. for WE are children of the day and sons of light. WE are not appointed to go through the wrath to come. WE will be removed before that great and terrible 'Day of the Lord'.

After Church-age responsibilities have been completed, God will once again continue His work of redemption, through His chosen people, Israel. But in the meantime - let us be watchful, and labour for the Lord diligently.

Let us support our church leaders and live in love with one another. Let us live in peace with each other, admonish the unruly, encourage the fainthearted, help the weak, be patient with everyone - and may we never repay evil with evil, but let us always seek after that which is good.

May we continuously rejoice in the Lord; pray without ceasing; and in everything give thanks; for the glory of God the Father and Jesus Christ, Whom He has sent.

Heavenly Father, thank You for the wonderful encouragement we receive in Your written word, and the enlightenment that You have given us about these end times. May we look for the blessed hope, when Christ returns - and in the meantime, may we continue to go forth and proclaim the gospel of grace, while there is still time - and we pray that many would come to faith in You, due to our testimony and for Your greater praise and glory, this I pray in Jesus name, AMEN. 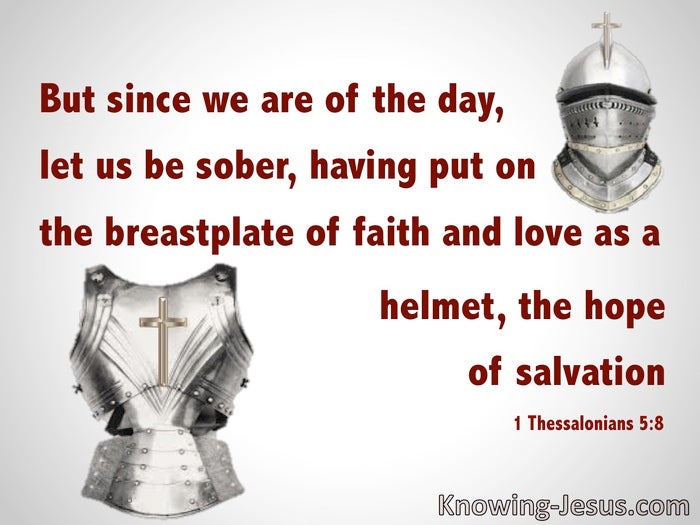 Choose a Verse from 1 Thessalonians 5