Jesus answered and said to her, "If you knew the gift of God, and who it is who says to you, 'Give Me a drink,' you would have asked Him, and He would have given you living water." 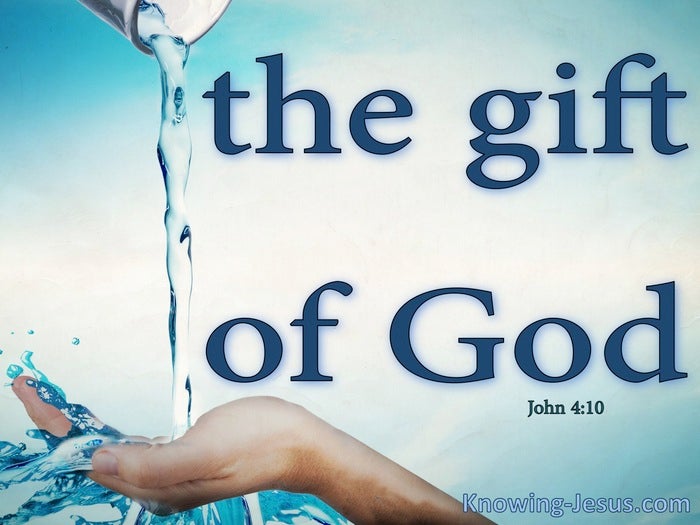 Jesus came to seek and to save that which is lost, for He is a gracious God Who searches us out before we would ever consider searching for Him - and yet in Christ are the words of eternal life; in Christ is all that we need for life and godliness; in Christ we become a new creation and part of His Body, with a new life and new hope of glory. In Christ we have peace with God and access to the peace of God in our hearts.. Oh! we should be seeking Him out with all our being, but He is always the One who approaches us and convicts our hearts of our need of Him.

And the gift of God that the Lord Jesus spoke-of to this woman-at-the-well is His free gift of salvation, which is openly available to all who will accept God's gracious offer of redemption, and be cleansed of their sin - by faith in Christ.

Christ did not have to go through Samaria.. but He needed to travel that way in order to seek out this particular immoral Samaritan woman. He did not have to speak to this specific individual, for Jews have no dealings with the Samaritans, but Christ initiated the conversation.. by humbly asking for a drink of water, so that He could freely offer the living water of life to this sinner - and pave the way for many lost souls in the city of Sychar to avail themselves of the waters of life.

There is One God, Who gave One Saviour to the world and ordained one way to be saved - by grace through faith in Him. And God clothed Himself in human flesh so that He could go through the hostile country of Samaria in order to offer salvation to a disparate group of lost and helpless sinners.

Christ met this Samaritan woman on His long, three-year trek to the cross, when His shed blood would become the means of grace and the hope of glory for her.. as it is for all who have sinned and fallen short of the glory of God.

The sacrificial animals.. whose innocent blood had been shed for many centuries, was only a temporary means to cover man's sin until God's One and only sacrificial lamb was nailed to a cross.. so that the wrath of God could be poured out in full measure on His sinless head - so that the price for our sin could be paid in full by Him.. and the power of sin, death, hell and the law.. could be broken in our lives.

It is not God's will that any should perish but that all should come to a faith in Christ's finished work at Calvary, and so God planned and purposed to give His one and only begotten Son to become the one and only Saviour to a world of lost sinners.. and ordained that the one and only way to be saved was by grace through faith in HIM.

Heavenly Father, thank You that You sought me out, when I was dead in my sins and sinking deep into the miry pit of sin, self, selfishness and seduction. Thank You that Jesus is the living water, in Whom alone are the words of eternal life and that in Him I have been made a new creation. Thank You that You searched me out by convicting me of sin, of righteousness and of judgement - so that by faith in Christ I have received Your free gift of salvation. May Your rivers of living water flow out through me to others, who are in need of Your forgiveness - in Jesus name I pray, AMEN. 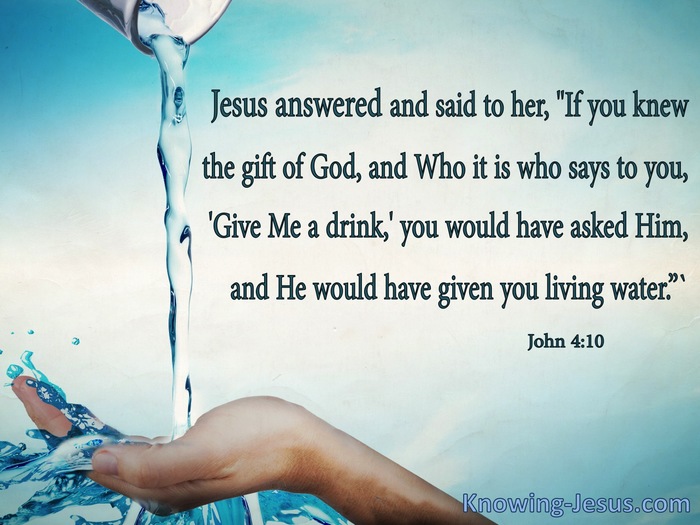 Choose a Verse from John 4