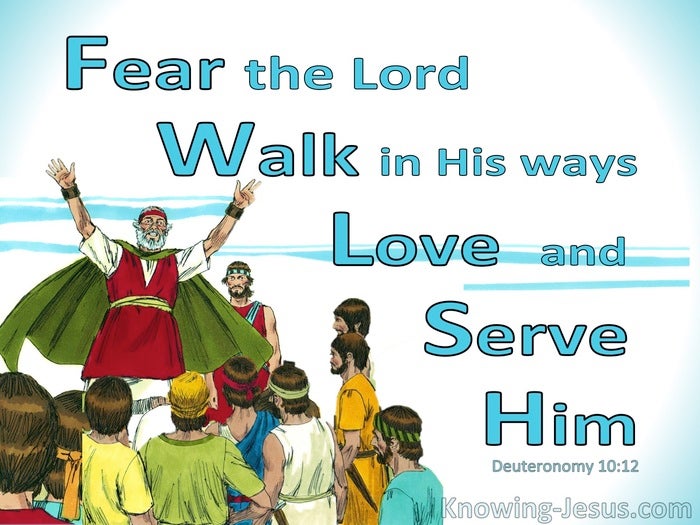 For the best part of 40 years the children of Israel wandered through the wilderness because of their unbelief. The Lord had brought them out of Egypt, but they did not trust Him to bring them into the land of Canaan. It would only have taken a few short weeks to complete their journey across the Red Sea into the promised land, but they would not - because of unbelief.

And so, after decades of weary wandering, a new generation of young Israelites were given another opportunity to cross the Jordan into the land, flowing with milk and honey, which the Lord had promised to Abraham, Isaac and Jacob, so many years before. Eleazar had replaced his father, Aaron as high priest, the Levites had been given their priestly duties, and in Deuteronomy chapter 10 we discover a new, energetic generation of Israelites ready and willing to commit their lives to God and renew their covenant promises to the Lord, which their parents made 40 years earlier.

Moses reiterated all the requirements of the Mosaic Law in their ears. He rehearsed all the conditions of the covenant they made with God. He reminded them they were a holy people unto the Lord who were chosen to be a people for his own possession. They had been selected from all the people groups on the face of the earth - not because of their great number, but for His holy name's sake. They were a holy nation unto the Lord - a peculiar people, who would tell forth the glories of God's name to the pagan Gentile nations.

Moses had been chosen by God to lead this rag-tag group of murmuring, squabbling, rebellious people, who had so angered the Lord by their unbelief, that he vowed to wait until they had buried everyone from the first generation, in the desert sands. Only two faithful men were exempt from the Lord's fierce judgement.

This solemn instruction was spoken by Moses, who for 40 years had faithfully led the complaining bunch of people round and round the wilderness. He reminded them that the self-dependent, unbelief, spiritual pride and rebellious attitude of the previous generation had angered God, and their survival as a nation demanded total dedication to the Lord and an utter commitment to trust His word, obey His commands and listen to His voice. And so they were given a definitive call, to fear the Lord, walk in all His ways, to love Him, and worship Him with all their heart and soul.

This was not the demands of a despotic dictator, but the wise words of a God Who knew that deviation from His word would render them at the mercy of the surrounding nations, who were enslaved by Satan, under the curse of death and would be adversely influenced by their pagan practices.

The instructions given to Israel so long ago are equally relevant to Christians in this age of grace. Total commitment to our heavenly Lord; a deep reverence for His holy name; a heart-desire to walk in His ways and a total trust in His promises is vital, if we are to stand firm against the spiritual wickedness in high places, that seeks to destroy our witness and render us ineffective in the spiritual battles in which we are all engaged.

Heavenly Father, thank You for the wise words that Moses gave to the second generation of Israelites at the end of their wilderness wanderings. Help me to learn the lessons of trusting Your word and depending on You alone, as I live my life in these spiritually challenging times. I pray that my faith in Your Word would develop and grow and my life would become a living sacrifice of worship and praise of You, Who alone are worthy. Enable me to love and trust you with my whole heart and soul and mind and strength, for Your greater praise and glory - this I ask in Jesus' name, AMEN. 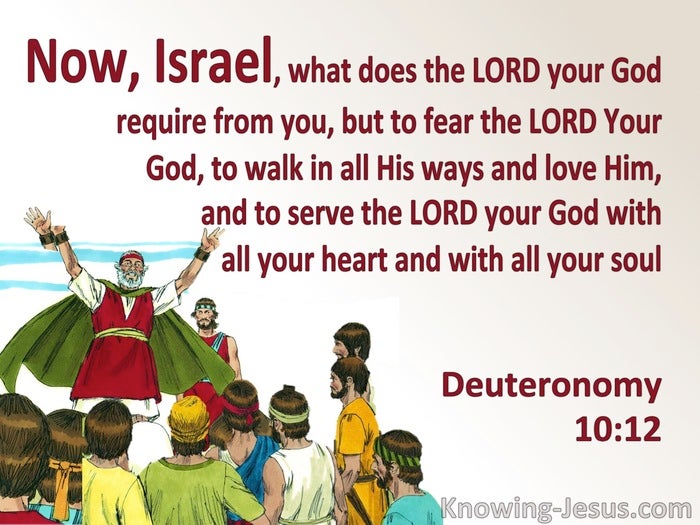 Choose a Verse from Deuteronomy 10