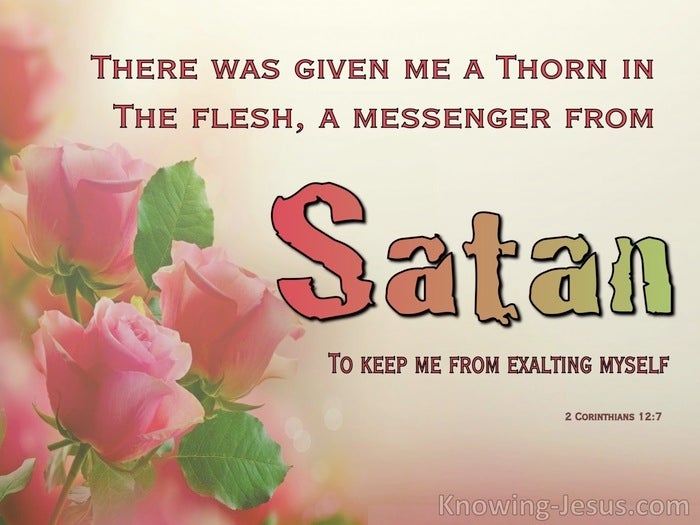 Many years before Paul started to write his epistle to the Corinthian church, he had a spiritual experience, that leaves the rest of us breathless. Before beginning his ministry and missionary journeys, Paul was caught up into heaven, and saw unspeakable things, about which he was commanded not to speak.

In various letters, he confirms that: eye has not seen.. ear has not heard, nor has it entered into the imagination of man, the wonderful things that God has prepared for those that love Him. No wonder Paul was able to confirm that: our light, momentary troubles, are achieving for us an eternal weight of glory.

However, God knew the incredible privileges, which had been granted to this apostle to the gentiles, were something that could cause Paul to become proud and arrogant. It could make him consider that he was more important than other believers. And so, Paul explains, that because of the surpassing greatness of the revelations he received from God, and to prevent him from becoming proud - God gave him a 'thorn in the flesh'.

A 'thorn in the flesh', is some sort of infirmity. It is a problem or a difficulty, which an individual may have in their life, which inhibits them in certain ways. God knew that Paul could have a tendency to become proud.. because of the amazing revelations he had received from God.. and to prevent this from happening, he was given an infirmity - 'a thorn in the flesh'.

Paul was not only transported to heaven, on one occasion, but he was also given many Church-age mysteries and truths, which had been kept hidden for ages and generations - but which God disclosed to him for our learning. It may appear that Paul had something to boast about in life - but he discovered that the only justifiable boast, that a redeemed man or woman has.. is to boast in Christ, and Him crucified.

We do not know what Paul's 'thorn in the flesh' was, but he referred to it as 'a messenger from Satan', which was designed to torment him. However, he further explained that his 'thorn in the flesh' was necessary.. to keep him from exalting himself, and becoming proud. Like all of us, Paul needed a constant reminder of his own weakness.. his inabilities, and his utter dependence upon the Lord. This tormenting thorn did not allow Paul to forget his own impotence and human helplessness, when compared with the greatness and majesty of our gracious God and Father.

The hindrance Paul had in his life, was designed by God to make his ministry even more effective. It was a permanent aide-memoir that: without Christ I can do nothing, but that His grace is always sufficient and His love is everlasting. As born-again believers, we have the life of Christ within, and the power of the Holy Spirit, to lead and guide. And the beautiful truth of our extraordinary position in Christ, and our identification with Him.. is that I can do all things through Christ, Who strengthens me.

Whether we have a specific 'thorn in the flesh' or whether we are simply encompassed about by the difficulties and dangers of normal life, - God is no respecter persons, and the grace and strength that Paul received throughout his ministry, is the same grace and strength.. which is freely available to all, who have been saved, by grace.. through faith in Christ.

May we seek to walk in spirit and truth, and to live godly lives in Christ Jesus. And no matter what difficulties, dangers or 'thorns' we may encounter, as we journey through life, may we do justly.. love mercy, and walk humble before our God, so that our lives may be a living sacrifice to Him, and a faithful testament of His sufficient grace.

Heavenly Father, thank You for the life and ministry of Paul, and the wonderful truths that are contained in his many epistles. I pray, that with Your grace, I would be kept from prideful thoughts and ungodly actions. Keep me low at the cross, and walking in humble obedience - and thank You Father, that Your grace is sufficient. Thank You that Your strength is made perfect in my weakness. May my life be a living testimony, to Your goodness and grace.. in Jesus name, I pray AMEN. 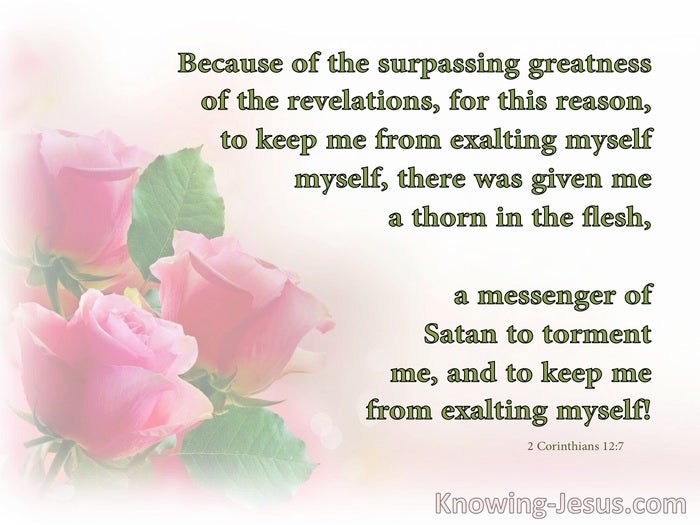 Choose a Verse from 2 Corinthians 12