for our gospel did not come to you in word only, but also in power and in the Holy Spirit and with full conviction; just as you know what kind of men we proved to be among you for your sake. 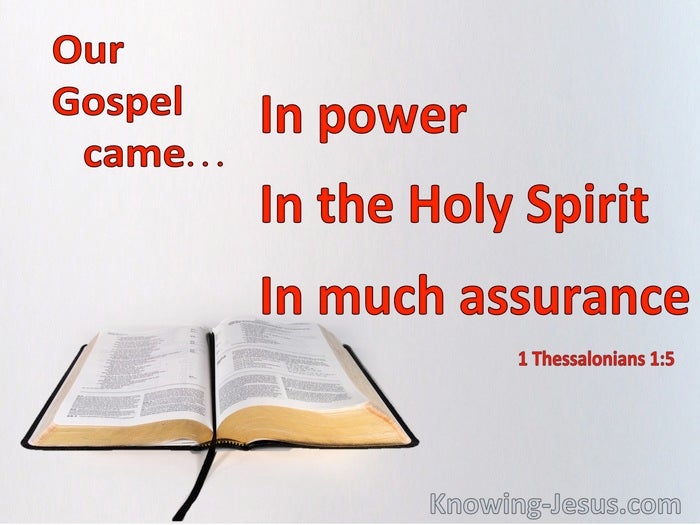 Paul began his epistle to the Thessalonians with much rejoicing and thanksgiving. He gave thanks for the good news of their eternal salvation and rejoiced over their work of faith, their labour of love, and the steadfast hope they had in Christ.

He also expressed joy that they were beloved by God and chosen in Christ Jesus. But he also showed his delight that the gospel he taught didn't simply come by word-of-mouth, but also came through the supernatural power of God, "Our gospel did not come to you in word only," Paul wrote, "but also in power and in the Holy Spirit and with full conviction."

Although Paul understood that faith comes by hearing and hearing from the Word of God... which is generally communicated through speech, verbal communication, or the direct teaching of a minister, he wanted to get across that the gospel he delivered is the power of God for salvation to everyone who believes - to the Jew first and also to the Greek.

Paul knew that the gospel of Jesus Christ, which he taught unashamedly, was not simply another religion where sinful man makes his futile attempts to find favour with God. Paul knew that the gospel he taught was the Truth that has come directly from the Almighty, Whose never-ending love is supernaturally shed abroad in our hearts... by the indwelling Holy Spirit of Christ Who is gloriously imparted to ALL who believe.

Paul was a well-educated man, but was careful not use persuasive words of human wisdom or cleverly constructed arguments to sway his audience into accepting the gospel he taught. Paul insisted that his message and preaching were accompanied by a demonstration of power through the Holy Spirit of God.

"Our Gospel did not come to you in word only," Paul insisted, "Our Gospel came also in power and it came in the Holy Spirit and with full conviction." And Paul was able to justify this claim, by adding, "just as you know what kind of men we proved to be among you for your sake."

The lives Paul and his team lived during their time in Thessalonica were a sufficient demonstration of the supernatural power of the indwelling Spirit of God working through them. Paul was able to point to his own life and his conduct during the time he lived among them, as proof that he was a man of integrity who spoke the truth.

We do not know whether it was through supernatural signs and wonders, a display of their spiritual gifts, or simply their godly conduct and victorious Christian walk to which he was referring, but Paul could confidently claim, "for our gospel did not come to you in word only, but also in power and in the Holy Spirit and with full conviction... and you know what kind of men we proved to be, while we were living among you - for your benefit!"

May the lives we live and the behaviour we display in our Christian walk deliver the same mighty message to the people with whom we come in contact today and in the days ahead. As we live our lives for Christ and share the gospel in word and in deed, may we demonstrate a life that is consecrated to Christ and empowered by the Holy Spirit for the glory of God the Father.

Heavenly Father, thank You for the inspired Word of God in the gospels and epistles that tell of the good news of the gospel of Christ. Thank You that the Word of truth has been passed down to us through generations of believers who have faithfully shared the good news. Thank You for those who shared the gospel with me, and I pray that You would use me to share the truth of the gospel for the benefit of others... in word, in deed, in the power of the indwelling Spirit, and for Your eternal glory. This I ask in Jesus' name, AMEN. 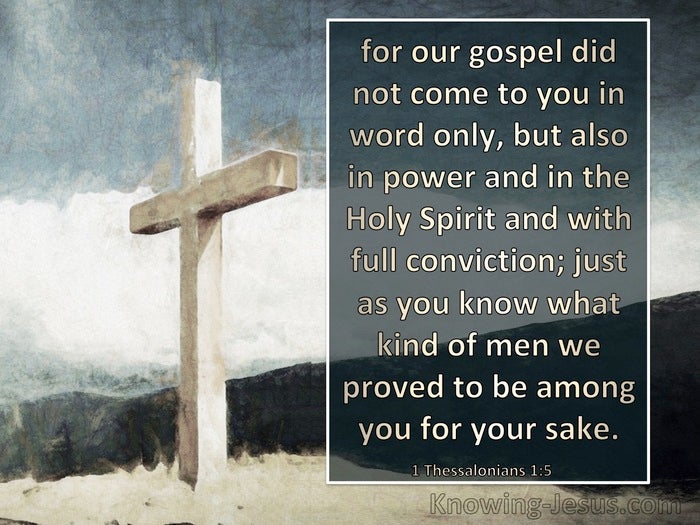 Choose a Verse from 1 Thessalonians 1