The one who commits sin is of the Devil, for the Devil has sinned from the beginning. The Son of God was revealed for this purpose: to destroy the Devil's works. 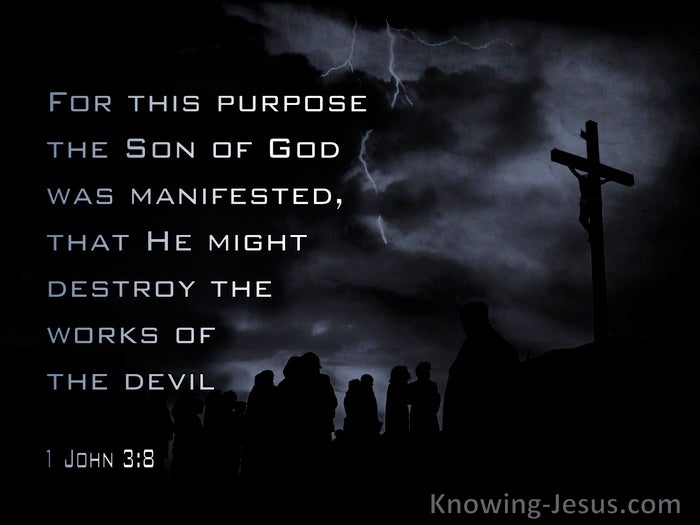 The unfathomable depths of Satan’s habitual sin, lies in contradistinction to the immeasurable heights of Christ's eternal righteousness. From the genesis of God's revelation of Himself to mankind, the devil is identified as the slimy source of sin and subtle instigator of all that is evil.

We are warned that the man or woman who commits sin is of the devil. He is the father of sin. He is the instigator of sin. He is one who deceived Eve in the beautiful garden. He is the poisonous root from which all sin is sprung, for Satan rebelled against God and sinned from the beginning of time.

Instead of reflecting the goodness of God the Father, the one who sins is imitating the behaviour of Satan. Instead of manifesting the beautiful character of Christ by walking in spirit and truth and by abiding in Him and He in us, they allow the enemy of our soul to dictate what they do and to adversely influence their hearts away from the Lord.

Those who adopt Satan's practice and imitate his ways are 'of the devil'. The sin nature, imputed to man at the beginning, is inextricably linked to the devil's wicked ways. He is the instigator of corruption and deceit and he was a murderer from the beginning. He is void of truth because he abandoned the truth when he rebelled against the Lord, and has proved himself to be both a liar and the father of lies.

While the principle and practice of sin originates from Satan, divine righteousness comes from the Lord Jesus. Christ's perfect righteousness is imputed to those who are born of God. The new nature we received from the Spirit of God at salvation, is Christ's own sinless nature, which is imputed to us and cannot sin.

However, the original sin nature we all inherited from our fallen parents can do nothing but sin. Our old sin nature is the heritage of all humanity and is incapable of producing good deeds and righteous acts. Every member of the human race is born a sinner. Every person is indwelt by the very principle of sin from conception - but the Son of God came to earth to destroy the works of the devil.

While man's old sin nature is of the devil, our new, born-again nature is of God. The 'old creation in Adam', is part of the kingdom of darkness and can do nothing but sin, while the 'new Creation in Christ', has been made a child of the light and has become a member of God's family - and that new nature, that comes from Christ, cannot sin.

Throughout our life on earth, a believer's old sin nature lusts against our new life in Christ and needs to be kept in the place of death. BUT Christ came into the world to pay the ransom price for the sin of the whole world. How we praise God that Christ was born into His own creation, that He might put an end to the works of the Evil One.

The continuous characteristic of the devil is evil and he who sins is of the devil. Satan was the one who spawned sin and has continued to sin from the very beginning. The nature of man is sinful, for man is a sinner who was born dead in trespasses and sins, but Christ came into the world to save sinners and to rescue them from the clutches of the Evil One - and by His sacrificial death and glorious resurrection, He has destroyed the works of the devil and put an end to his wicked ways.

Let us in lowliness of heart and thankfulness of spirit, praise our great God and Father for His great plan of salvation and marvellous purpose for mankind. His plans and purposes were conceived in the eternal council chambers of the Almighty and designed to arrest the evil intent of the enemy assault on those who are made in God's image.

Let us not serve sin or indulge in lawlessness by our actions and attitudes, our words and our imaginations, but rather let us show grateful thanks, for His unspeakable mercy and amazing grace. Let us turn our backs on all that feeds the evil lusts of the fallen one, by the obedient surrender to God, of all that we are and all that we do.

God's purpose for us is encapsulated in this precious verse, for the Son of God came in the likeness of sinful flesh and suffered the most shocking ignominy, insults, and death, so that sin and sickness, want and weariness, destruction and death, and all that is encompassed in the works of lawlessness and evil, might be forever destroyed in my life and in yours, in order that Christ is all in all.

Father, I thank You that everything that could cause my ruin has been forever destroyed at the Cross of Christ and I have been born into the family of God. But Father, many are blinded by the wicked one who seeks to destroy the souls of men. Use me I pray, and may I become a channel through whom Your saving grace may flow out to others, who are in bondage to sin and Satan. Help me to keep my old sin nature in the place of death, and walk in spirit and truth. In Jesus' name, I pray, AMEN. 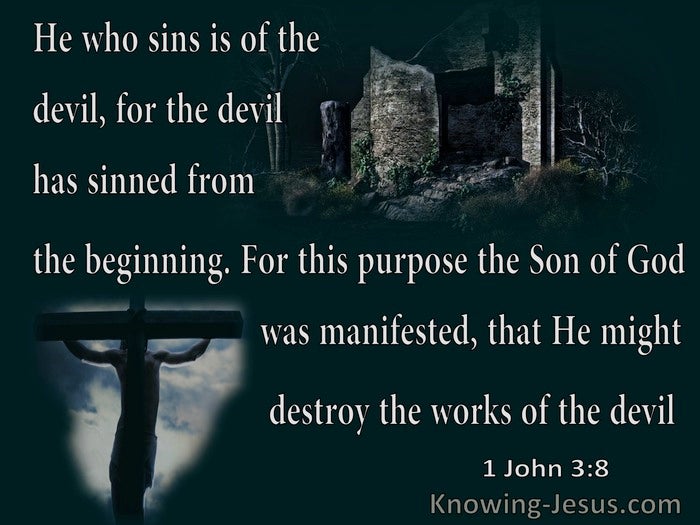 Choose a Verse from 1 John 3