If anyone does not love the Lord, he is to be accursed Maranatha. 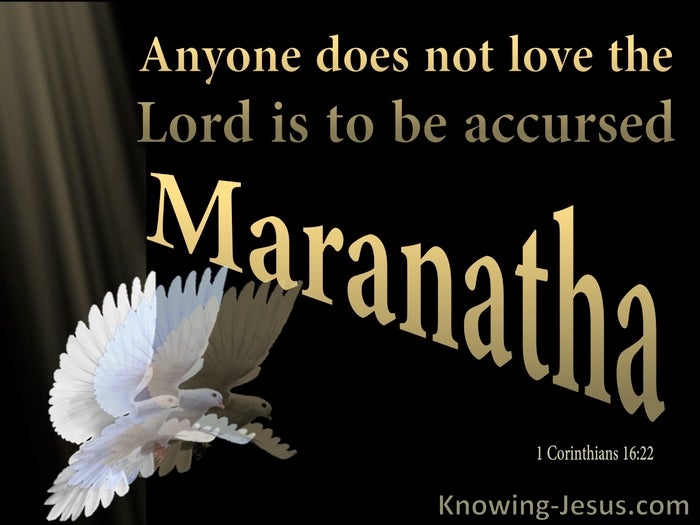 Paul concluded his epistle to the Corinthians by exhorting them to engage in appropriate Christian conduct. He called on them to be alert, to stand firm in the faith, to act like men, and be strong. He encouraged each of them to be on their guard, to stand fast in the faith, and to let everything be done in love.

Paul had exposed many problems in the conduct of these Corinthian believers, earlier in his letter. He addressed many doctrinal issues that were inhibiting their spiritual development and gave some stern warnings to these carnally-minded Christians. Paul appealed for them to abandon their worldly ways, cease from any internal disputes, reject the aberrant doctrines of false teachers, and live in a bond of peace and brotherly love.

In his closing comments, Paul speaks a word of encouragement, while exhorting them toward sound doctrine, maturing in the faith and developing Christ-like love, and made a solemn pronouncement, "If anyone does not love the Lord, he is to be anathema. If anyone does not love the Lord Jesus, let him be accursed," were Paul's stern words to these believers, while he concluded his epistle with the wonderful entreaty, "Maranatha - Come Lord Jesus!!"

False teachers had been responsible for many worldly attitudes, and certain unorthodox doctrines had infiltrated the church at Corinth. Quite possibly, some of the recipients of Paul's corrective letter were still promoting a false creed while others remained subject to their influence. So dangerous, abhorrent, odious, and repugnant were these false dogmas to Paul, that he pronounced an anathema on those that led others astray.

'Anathema', is a Greek word that translates into 'accursed', 'condemned', 'damned', and 'bound under a great curse.' The terrible consequences of false teaching and demonic doctrines, percolating into the body of Christ, cannot be over-emphasised, which is why Paul made this shocking invocation on all who do not love the Lord with all their heart and soul and mind and strength. Love of God can never translate into deceiving His children with false teachings, aberrant creeds, and demonic doctrines, and so Paul proclaimed a curse on all who peddle such ideas.

It was JC Ryle who said: 'Paul allows no way of escape to the man who does not love Christ. He leaves no loophole or excuse. A man may lack a clear head-knowledge and yet be saved. He may fail in courage, and be overcome by the fear of man, like Peter. He may fall tremendously, like David, and yet rise again. But if a person does not love Christ, he is not in the way of life. The curse is yet upon him. He is on the broad road that leadeth to destruction.'

Ryle continued: 'The judgement on false teachers and those that do not love the Lord is tremendously severe, which is why Paul used the word 'anathema', to label such a person. But each member of the body of Christ has the responsibility to know the truth, contained in the word of God, so that they will not be tossed about by every wind of doctrine nor seek after teachers that spew out an egocentric Christianity, rather than the Christ-focused truth.'

There are many who make a commitment or claim the label of 'Christian' without a deep love for the Lord, but Paul makes it very clear that a genuine love of Jesus should shine from a heart of love and should be mirrored in the words we say and the things we do. Our love for the Lord Jesus should reflect the deep love that Christ had for His heavenly Father.

In His farewell discourse to His disciples, Jesus reiterates the importance of Christian love. "A new commandment I give unto you that you love one another with the depth of divine love that I have for you." And in response to a question from one of His disciples, He explained that the one that loved HIM with divine love, is the one that will keep His Word.

The one who truly loves the Lord will delight to do His will and strive to maintain unbroken fellowship with Him through prayer and praise, Bible reading, and holy living. Love is not steady-state that can be attained, once for all. The love about which Paul speaks is an ever-growing intimacy with Jesus, that expands and develops through time and into the eternal ages to come.

Let us examine ourselves to see if we are in the faith and secure in the truth of the Word of God, and let us study to show ourselves approved unto Him... and to love the Lord with all our heart and soul and mind and strength.

Heavenly Father, thank You for Your Word and this instructive letter to the Corinthian church. I pray that I may know You more each day and grow in grace and in a knowledge of Jesus Christ my Lord. Give me discernment I pray, so that I may not be tossed about by false teachings and I pray that the love of Christ may fill my heart and become a conduit, through which Christ's love spills out to those I meet. This I pray in Jesus' name, AMEN. 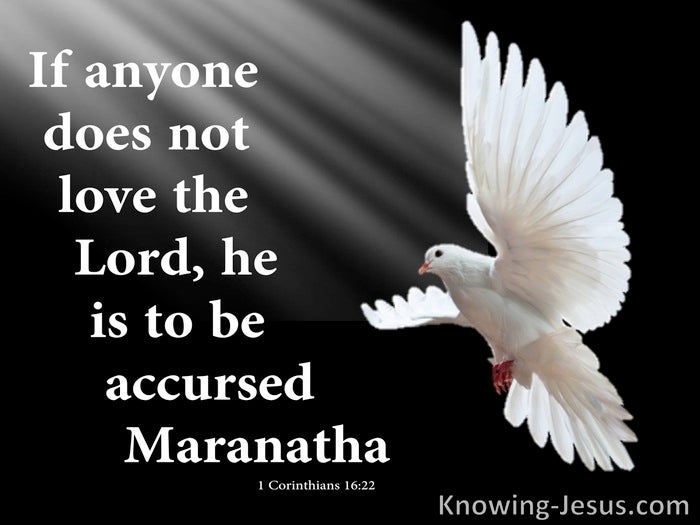 Choose a Verse from 1 Corinthians 16