Now you are Christ's body, and individually members of it. 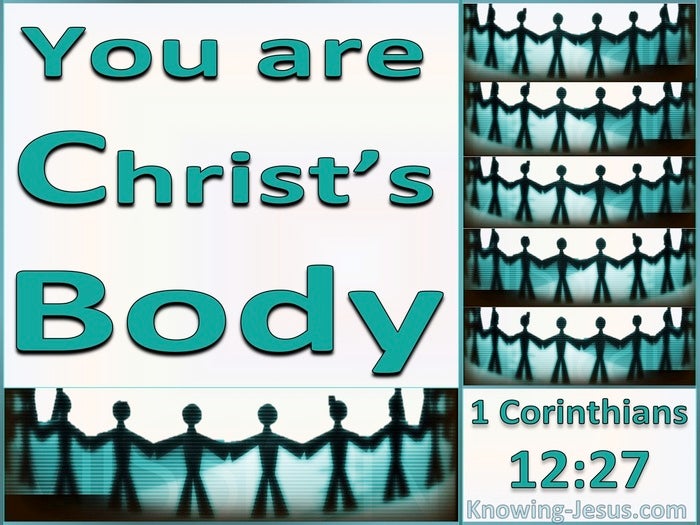 As one reads through this epistle to the Corinthian Christians, it is evident that although these saints were enriched in all the gifts of the Spirit, they were demonstrably deficient in the fruit of the Spirit. Although they were gifted with the tongues of men and of angels, prophetic utterances, knowledge, and many benevolent actions, they lacked godly love and did not exhibit spiritual fruit. They were not growing in grace and in a knowledge of their Lord and Saviour as God desired, but were regressing in their spiritual growth and maturity... back to infancy, to their great shame.

This caused Paul to label these Christians as 'spiritually immature'. He described them as 'carnal' believers who were demonstrating the ungodly ways of the natural, unsaved man. There was dissension amongst them and arguments. There was sexual immorality and spiritual pride among their ranks. There was a lack of spiritual discernment and an absence of true Christian grace.

And so, Paul exhorts the spiritually bankrupt members of the Corinthian Church to put away childish things and to remember that as members of the Body of Christ, they had the Holy Spirit of God indwelling their mortal bodies! Therefore, they should NOT act like the natural man who is dead in his sin and beset by unbelief... nor should they exhibit the fleshly attitude of a carnal man, which is so displeasing to the Lord. Paul exhorts these believers to live and behave as spiritual men who are abiding in Christ and walking in spirit and truth.

He reiterated their need to grow in the faith. They were not to abuse their spiritual gifts in some unseemly, self-aggrandisement. They were not to pervert their God-given gifts in order to stroke their own, personal egos. Gifts of the Spirit are given for the benefit of the Body of Christ and for the glory of God. They are not given to satisfy the lust of a self-indulgent, carnal believer.

Paul considered that the correct use of our gifts and graces is of special significance when commemorating Christ's sacrificial death. Paul considered that particular attention should be given to the correct use of spiritual gifts in the breaking of bread which represents Christ body - broken for us, and the sharing of the cup which symbolises His precious blood - shed for us.

And so, Paul reiterated the importance and responsibility of every individual believer to live and work together, by maintaining unity within the Church - for collectively we are all Christ's Body while being individual members of it. Paul expressed it this way in Romans, "although we are many, we are one Body in Christ Jesus, and individually we are members of one another."

Paul made it very clear that just as a human body is made up of a vast number of different functioning parts, it remains one unified whole. Each of the different components and organs of the body has its own vital function and unique position within the body. A heart is different from an eye, a liver has different functions from an ear or a toe - but all are needed if the body is to function smoothly.

While each individual member of the body is incapable of carrying out the function of another body-part, together they work for good. Each makes its own unique contribution in order to successfully function as one unified whole for the benefit of the body - but if one member malfunctions, it affects the whole.

Just as the human body was designed by God to function as one unified whole - so the Body of Jesus Christ has been designed to be a unified whole. Each believer has been endowed by the Spirit with his or her own gifts and graces. Each has been spiritually equipped to carry out the work that God has prepared for them to do, so that together with the rest of the Body of Christ, they will individually and collectively grow in grace and walk in the unity of the Spirit.

The Christian Church is composed of all individuals who have been saved by grace through faith in Christ Jesus for the forgiveness of sins and life everlasting. Each church fellowship is a microcosm of the world-wide Body of Christ. Each has its own unique role to play and all members are of equal value and import to our heavenly Father. As Paul wrote in Ephesians, "we are to grow up in all aspects into Him who is the head, that is, Christ, from whom the whole Body, being fitted and held together by what every joint supplies, according to the proper working of each individual part, causes the growth of the Body for the building up of itself in love."

YES, the Lord Jesus is the Head over the Body, and His supreme command is that love should prevail in the hearts of all His children. He desires that we consider the needs of others before our own and that we eschew evil, envy, independence, self-importance, or personal worthiness.

How important that the genuine unity of the Body is maintained, while at the same time recognising that we are a diverse group of redeemed individuals that consist of Jews and Gentiles, male and female, young and old, black and white, slave and free. Praise God that we are all ONE in Christ Jesus our Lord and that by grace through faith, "we are now Christ's Body - and individually members of it."

Heavenly Father, thank You for the privilege of being united to Christ by faith and being part of Your Body - the Church. Thank You for my brothers and sisters in Christ, and I pray that we would be united together in love. I pray that in all things we would learn to love You with all our heart and soul and mind and strength and put the needs of our brothers and sisters in Christ before our own, for Your greater praise and glory. This I ask in Jesus' name, AMEN. 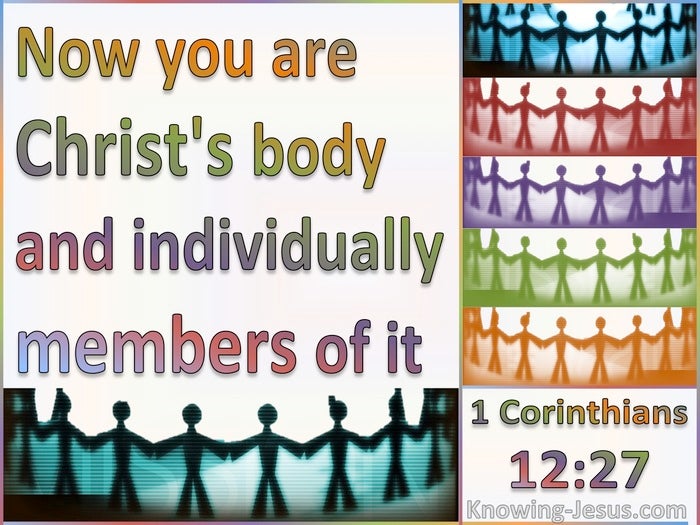 Choose a Verse from 1 Corinthians 12